If you’re new to Discord, you might be thrown off by the lack of an endless feed peppered with ads. On Discord, all of the action happens in interest-specific servers, and the company wants to make it easier for anyone to stumble across and plunge into those communities.

The company launched Stage Channels, its own Clubhouse-like voice event rooms, in late March. With those building blocks in place, in June Discord will start surfacing events (think open mic nights, book clubs, etc.) through a new portal called Stage Discovery, adding a way for anybody to connect with the cool communities in the process. 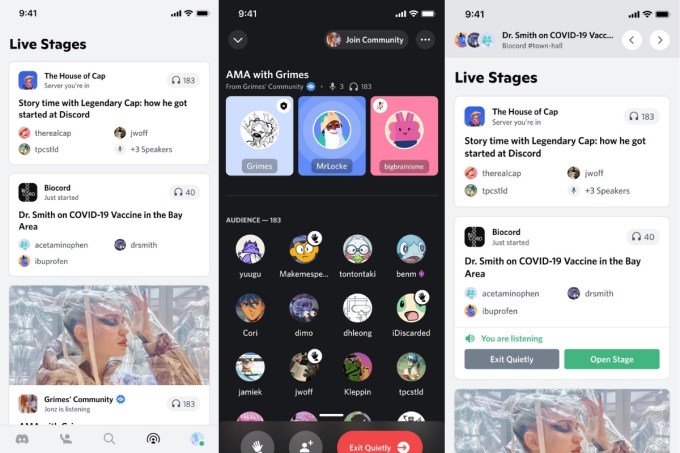 Discord Product Manager Rick Ling says Stage Channels are a hit so far, and the company realized that events can be a gateway to introduce new users to the communities at the heart of the platform.

“For us, just dropping in and out of these audio conversations is not the end goal,” Ling said during a press event. Soon, servers will be able to list public events, inviting anybody to come check things out. Discord also says that its new discovery feature will launch with some noteworthy partners, hinting that “one rhymes with…… rhymes.” (It’s Grimes.)

Discord has a few other new features around the corner too. Threaded conversations are on the way this summer and the company is about to begin a pilot program to test paid, ticketed audio events. The latter could be a huge boon for creators, who haven’t been able to make money through the platform previously, and an important extra revenue stream for a platform that has no plans to get into the targeted advertising game.

Stage Discovery is a bit of a departure for Discord. Previously, to check out a live event, you needed to pop into a server first. Because the platform is so community-based, people interested in a topic, say a particular Twitch streamer, often hop directly into those servers from elsewhere.

Discord does have some discovery and search functionality — users can thumb through popular and featured public servers in its Discover tab — but historically it’s been relatively basic. But by expanding the “discovery surface,” Discord is likely to attract a lot of people who either haven’t heard of the app or think it’s just a voice chat utility for gamers.

The new feature will show up in the home tab, offering a directory of live voice events. While that much is Clubhouse-esque, the feature’s real promise is that those events can bring new users into the fold, connecting them to thriving communities that have a lot more going on beyond events. Users will be able to see voice events at which their friends are hanging, events that servers they belong to are hosting and other live events that they aren’t connected to.

“At the end of the day, this is still really a window into communities and how to join communities,” Discord Product Marketing spokesperson Jesse Wofford told TechCrunch. Wofford emphasized that Discord isn’t trying to lure anybody into an endless scrolling loop — instead the goal is connecting users with the vibrant communities for which the platform is known. 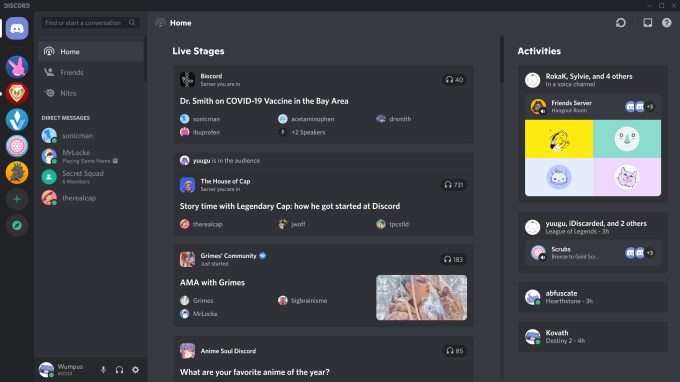 Discord is also celebrating its sixth birthday by sprucing up its brand a little, brightening its color scheme and making a few tweaks to its apparently beloved anthropomorphized little purple controller dude, Clyde. (Discord insists that Clyde is “blurple.”) The company says it wants to keep things playful while making its visual identity “more inclusive and welcoming” to the kind of people who haven’t been using the app for years.

While a big boost to discovery is on the near horizon, Discord’s product philosophy hasn’t changed. “There are no feeds, no likes, no way for anything to go viral,” Discord founder and CEO Jason Citron said, adding that Discord was designed with community building in mind from day one.

Discord wasn’t always such a welcoming place. The app has always served gamers, but it was also a haven for white supremacists, including the ones who organized the Charlottesville rally that left Heather Heyer dead. In a not-so-distant past life, dangerous far-right extremism thrived on Discord, even as the company largely avoided the bad headlines that slammed more mainstream social platforms for facilitating hate.

Discord rooted out neo-Nazis and other dangerous communities starting in 2017, and by 2021 the company was well-positioned to tell a different story. Now, 15% of the company works on its Trust and Safety team, a group dedicated to protecting users and shaping content moderation policies. Discord says it has 150 million monthly active users and most of them are Gen Z (18 to 24-year-olds). The product was built for gamers from the get-go, but Discord has been broadening its horizons recently and started having conversations with users about how it’s helped them fight isolation during the pandemic.

Unlike Instagram’s ad-choked social feed or Twitter’s often brain-melting endless feed, Discord is often a joy to use. And all of that user-friendliness doesn’t appear to be a bait and switch either. Revenue from its Nitro premium product and other paid perks are growing fast and the company has no plans for targeted ads.

Discord’s savvy pandemic-era campaign to broaden Discord’s appeal to nongaming communities — musicians, study groups, surrealist fantasy baseball leagues — appears to be paying off. Discord’s user numbers are explosive and the company is adding sensible new features at a healthy clip. The outlook is good for the company and its users alike — and what a rare convergence that is.