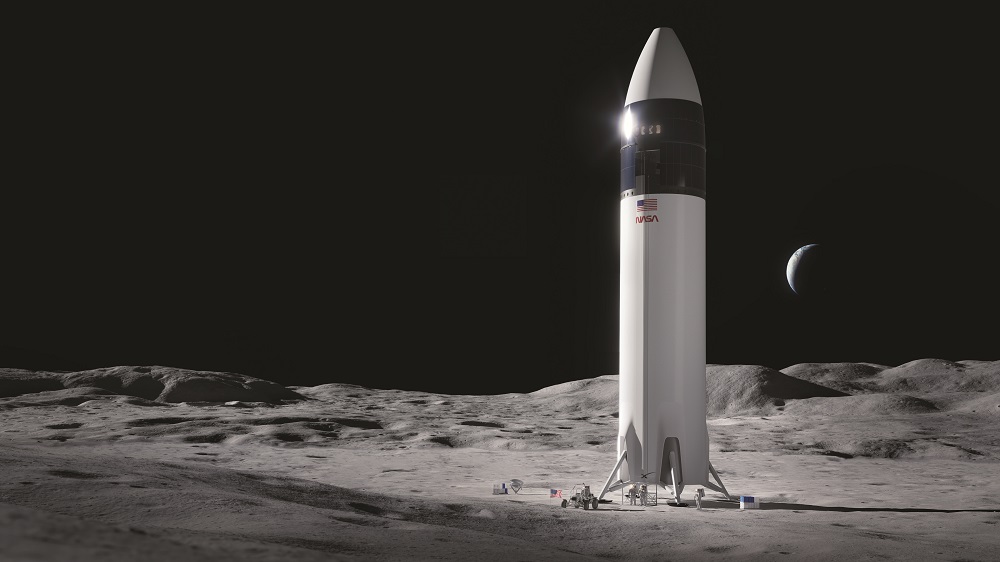 For months, NASA had strongly suggested that it would select two companies for the next phase of its Human Landing System (HLS) program. Just as with the commercial cargo and crew programs, agency officials said, having two companies develop and demonstrate lunar landers would provide redundancy and ensure NASA was getting the best deal.

“Competition — having multiple suppliers for us — is an extremely important principle,” Mark Kirasich, director of NASA’s advanced exploration systems division, which includes the HLS program, said at a conference in February.

So, it was a surprise when NASA announced April 16 that it had picked just one company for what it calls an “Option A” award to develop a lunar lander and fly a single demonstration mission with astronauts on board. Even more surprising was the company NASA selected: SpaceX, whose Starship vehicle appeared massively oversized for the job. However, the end of the HLS competition does not necessarily mean the end of the overall competition to send astronauts to the surface of the moon.

“THIS IS ACTUALLY DOABLE”

Going into the HLS Option A competition, SpaceX was widely considered the underdog. It received the smallest of the three base period awards for the program in April 2020, at $135 million, compared to Blue Origin’s $579 million and Dynetics’ $253 million. NASA’s assessment of those original proposals graded SpaceX lower than Blue Origin and Dynetics, with limited confidence “in SpaceX’s ability to successfully execute on its proposed HLS development schedule,” according to a source selection statement.

But at the April 16 announcement — held late on a Friday afternoon with just a couple hours’ notice — NASA said SpaceX offered not only the best proposal, but the only one the agency could afford. “It was in NASA’s best interest, along with the budget that was there, for us to award to one,” said Kathy Lueders, NASA associate administrator for human exploration and operations.

In the source selection statement for the Option A competition, SpaceX had a technical score of “Acceptable,” the same as Blue Origin and higher than Dynetics’ “Marginal.” Its managerial score of “Outstanding” beat out the “Very Good” scores from the other two companies. But the biggest difference was price: SpaceX bid $2.89 billion, while Blue Origin was “significantly higher” than that; Dynetics was “significantly higher” than Blue Origin.

That price difference was a key factor for NASA, which received only $850 million for the HLS program in fiscal year 2021, one-fourth of its original request. Lueders wrote in the source selection statement that “at the initial prices and milestone payment phasing proposed by each of the Option A offerors, NASA’s current fiscal year budget did not support even a single Option A award.” NASA then asked SpaceX to make an unspecified change to its payment schedule, but not its overall price, before making an award.

That ruled out, she argued in the document, picking a second company, even if NASA asked it to lower its price. After selecting SpaceX, she wrote, “the amount of remaining available funding is so insubstantial” it wasn’t feasible to ask either company to revise their proposals.

NASA said little at the announcement about the technical merits of SpaceX’s Starship lunar lander, beyond that it met or exceeded various requirements. “SpaceX also, I’m sure, will be very happy to talk about their strategy,” Lueders said. But SpaceX wasn’t represented at the briefing and the company, which eschews press releases and routinely ignores media inquiries, said nothing beyond a single tweet stating it was “humbled” to win the contract.

A week later, SpaceX Chief Executive Elon Musk discussed the HLS award during a NASA briefing about the launch of the Crew-2 commercial crew mission. “It’s definitely going to be really helpful funding the Starship program,” he said. Asked later in the briefing if a 2024 Starship lunar landing with astronauts was feasible, he agreed.

“Yeah, I think so,” he said, then paused. “I think it will happen. I think 2024 seems likely. We’re going to aim for sooner than that. This is actually doable.”

Neither Blue Origin nor Dynetics are giving up on their lunar lander ambitions. On April 26, the companies filed separate protests with the Government Accountability Office, seeking to overturn the HLS Option A award.

Both companies alleged in their protests that NASA improperly evaluated the technical merits of their proposals and, in the words of Blue Origin’s protest, “unreasonably favored” SpaceX’s proposal. Blue Origin, for example, claimed NASA improperly concluded there were problems with its lander’s communications system, while Dynetics argued NASA overlooked the steps the company was taking to reduce the mass of its overweight lander.

The two companies also took issue with the rationale NASA used to select a single company. Blue Origin revealed in its protest that it bid $5.99 billion for the HLS Option A award. While twice as high as SpaceX’s bid, it argued that the combination of the two would have cost NASA about the same as what it spent on the commercial crew program, which supported Boeing and SpaceX.

Blue Origin complained that NASA didn’t give it a chance to revise its bid. Brent Sherwood, senior vice president of advanced development programs at Blue Origin, said in the protest that had NASA informed the company that budget issues would preclude the agency from making two awards, “Blue Origin would have welcomed the opportunity to offer specific adjustments in a revised proposal.”

Dynetics took a somewhat different approach. It argued that NASA overlooked several alternatives when it decided to make a single award, from going back to the companies for revised proposals to canceling the solicitation entirely. Another option it highlighted was for NASA to use the available funding for multiple awards of “sustainable” lander studies, a separate contract line item in the solicitation, rather than a single Option A award.

“This whole mechanism was set up to be very flexible, and they didn’t really use the flexibility they had,” a source familiar with Dynetics’ protest said.

Those protests are now in the hands of the GAO, which has until Aug. 4 to sustain or deny them. NASA announced April 30 it was suspending work on the HLS award it gave to SpaceX “until GAO resolves all outstanding litigation related to this procurement.”

To many, the protests are not surprising, given they’re common for any large government procurement. “I expected them to come. They’re a normal part of life in Washington,” said Rep. Don Beyer (D-Va.), chair of the House space subcommittee. “The authorities will sort through it and we will move on.”

Others in Congress are taking a different approach to giving companies a second chance at HLS. The Senate Commerce Committee approved May 12 a NASA authorization bill as an amendment to legislation for the National Science Foundation called the Endless Frontier Act.

The amendment, introduced by Sen. Maria Cantwell (D-Wash.), chair of the committee, is similar to a NASA authorization bill that the Senate approved at the end of the last Congress. This version includes a new “competitiveness within the Human Landing System program” provision that directs NASA to have no fewer than two companies under contract to develop lunar landers within 30 days of the bill’s enactment, and authorizes $10.032 billion for the HLS program — slightly above the combination of the SpaceX and Blue Origin bids.

The committee didn’t discuss the amendment, which passed on a voice vote, and it’s uncertain the amendment will make its way to a final version of the bill. However, Cantwell previously stated she was disappointed NASA did not pick two companies for HLS. “I think there needs to be redundancy, and it has to be clear in this process that it can’t be redundancy later. It has to be redundancy now,” she told Bill Nelson, the nominee for NASA administrator, during his April 21 confirmation hearing.

Nelson, at that hearing, said he supported the agency’s approach to the HLS procurement, including its plans to accelerate the acquisition of lander services that will be open to competition. “Those competitions will be there,” he promised Cantwell.

NASA is proposing to acquire lander missions after the single Option A mission through a program called Lunar Exploration Transportation Services (LETS). NASA foresees LETS being a full and open competition, with multiple companies winning contracts to transport astronauts to the surface of the moon and back, similar to its space station commercial cargo and crew contracts.

The actual LETS competition is “still a few steps away,” cautioned Lisa Watson-Morgan, NASA HLS program manager, in an April 29 statement. The first of those steps was a request for information (RFI) asking industry for input on how to structure the LETS program.

NASA will follow with a broad agency announcement as soon as June to fund risk reduction work for those lunar landers. At a May 3 industry day, Watson-Morgan said NASA would make several awards, but each would likely be no more than $15 million, a tiny fraction of the development cost of a lunar lander. “We do not have a tremendous amount of dollars,” she said.

That could be too little and too late for some companies that don’t have wealthy founders or other access to capital. “Putting out an RFI for something that’s a couple years from now, well, there’s not going to be anybody left,” said one industry source. “Other than billionaires who can choose to keep things around, you’re not going to have others left in the game that are going to give you real competition.”

Even a company like Blue Origin that’s funded by billionaire Jeff Bezos will be at a disadvantage to SpaceX in any LETS competition thanks to SpaceX’s HLS award. That assumes, though, that SpaceX will successfully develop Starship on a schedule like what it proposes.

“I tend to be somewhat optimistic with respect to schedules,” Musk said, laughing, during the Crew-2 press conference shortly before he predicted a 2024 landing. “Also, we need to be, like, not making craters.”

He laughed again. “We’ve got some work to do, but we’re making rapid progress.”

This article originally appeared in the May 2021 issue of SpaceNews magazine.

Chronosphere raises $200M at a $1B+ valuation for cloud-native monitoring, adds granular, distributed tracing to its dashboard
Made of Air, a maker of ‘carbon negative’ thermoplastics, locks in $5.8M
Opal is helping companies ensure employees have access to the right apps
Solar farms keep the neighbourhood cool, inspecting solar panels in broad daylight
David vs Goliath: Small-Town Mayor from California Engaged in Legal Battle Against Gigantic Oil Industry