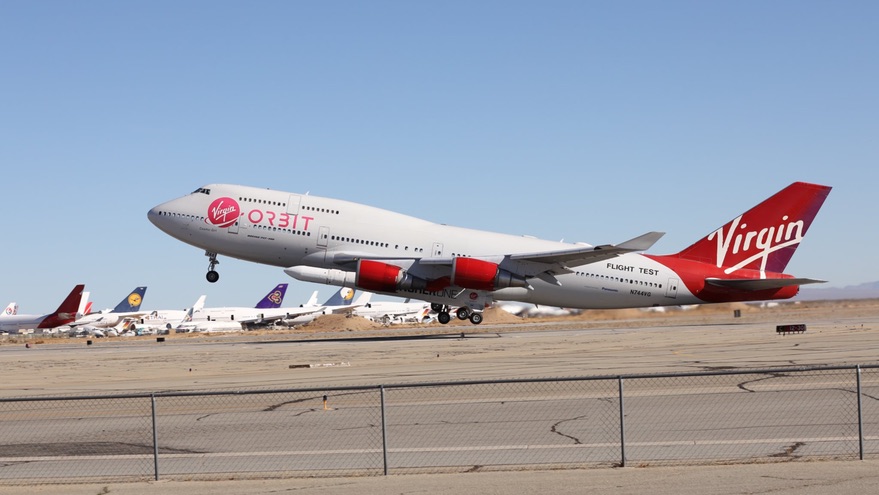 The company’s Boeing 747 aircraft, called Cosmic Girl, took off from the Mojave Air and Space Port in California at 1:38 p.m. Eastern with the LauncherOne rocket attached. The plane flew out over the Pacific just off the Southern California coast and released the rocket at about 2:39 p.m. Eastern.

The rocket ignited its NewtonThree first stage engine for three minutes, followed by stage separation and ignition of the NewtonFour engine in the rocket’s second stage for nearly six minutes. After a 46-minute coast, the rocket reignited the NewtonFour for a five-second burn, followed by payload deployment in an approximately 500-kilometer orbit, although Virgin Orbit took more than an hour to confirm those final steps.

The launch was the capstone of a development program that dates back to July 2012, when Virgin Galactic announced its intent to develop a small launch vehicle to complement its SpaceShipTwo suborbital vehicle. LauncherOne was originally planned to use the same WhiteKnightTwo carrier aircraft as SpaceShipTwo, but the company later decided to acquire a Boeing 747 for use as a carrier aircraft. Virgin Galactic spun out the LauncherOne project into a separate company, Virgin Orbit, in 2017.

The customer for the Launch Demo 2 mission was NASA under a contract awarded in 2015 as part of its Venture Class Launch Services program to support emerging small launch vehicle developers. The mission, called ELaNa 20 by NASA, carried 10 cubesats from eight universities and one NASA center. The spacecraft are designed to perform a range of science and technology demonstration missions.

Despite flying payloads, Virgin Orbit emphasized before the launch that the primary purpose of the flight was to test the vehicle. “It’s important to note that this is a test launch,” Dan Hart, president and chief executive of Virgin Orbit, said in a prelaunch call with reporters. “Any early launches of a launch system carry a certain amount of risk.”

“We will be thrilled to get the data and see the performance of the first stage and the second stage as it goes through their paces. We’re also mindful that there’s risk on whether we will get to the final orbit,” he added. “We are working vigorously and looking at all the details in making sure we have the best shot possible to get to orbit.”

Virgin Orbit’s first LauncherOne flight, in May 2020, failed seconds after ignition of the rocket’s NewtonThree engine. An investigation determined a liquid oxygen feed line ruptured, causing the engine to shut down.

Hart said in the prelaunch call that the company brought in “some of the best industry experts,” including former chief engineers of the Atlas and Delta launch vehicles, for an independent investigation. The Federal Aviation Administration, NASA and U.S. Air Force monitored the investigation, with support from The Aerospace Corporation.

After identifying the cause, Virgin Orbit performed a new structural analysis of that portion of the vehicle and modified components to address the problem, followed by testing on a vibration table and static-fire tests of the engine. The company also performed a similar examination of NewtonFour, the engine in the second stage that did not get a chance to fire in the previous launch attempt. “There were some minor mods that we made there as well,” Hart said.

In the prelaunch briefing, Virgin Orbit didn’t disclose plans for their next launch, but Hart stated that the company was assembling the next LauncherOne rocket, which he described as being a “few weeks away from being ready.” Several other vehicles in earlier stages of assembly.

Hart said the company saw a diversified market for LauncherOne, with growing interest from U.S. national security customers. “The market has shifted a little bit, where the moves that the government has made open up new opportunities there, and we’re very focused on that,” he said. That’s in addition to demand from NASA and other nations’ space agencies and from developers of constellations of dozens of smallsats.

“We are really positioned to ramp up into a steady cadence of launch,” Hart said.