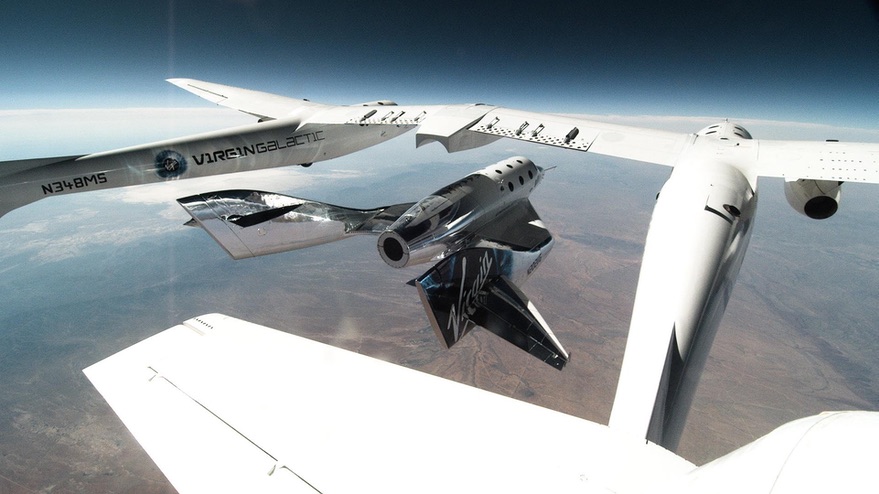 WASHINGTON — Virgin Galactic says it is delaying the next test flight of its SpaceShipTwo suborbital vehicle by more than two months to address technical issues, part of a revamped flight test program that will postpone flights of space tourists to 2022.

In an earnings call Feb. 25 timed to the release of its fourth quarter and full year 2020 financial results, company executives blamed an aborted test flight of SpaceShipTwo Dec. 12 on electromagnetic interference (EMI) that caused a flight computer to reboot just as the vehicle ignited its hybrid rocket engine. The vehicle glided to a safe landing at Spaceport America in New Mexico.

Mike Moses, president of Virgin Galactic, said a new flight control computer system is the likely source of increased levels of EMI. The company took steps to shield components from that interference to avoid a similar reboot and prepared to make a powered test flight as soon as Feb. 13. But in the final days of preparations, technicians noted continued EMI issues with vehicle systems.

“We saw some of our sensor readings — pressures and temperatures, those kinds of things — show some unusual fluctuations, which let us know EMI was still present and maybe in systems we didn’t initially anticipate,” he said. Now, the company is pursuing a modification to the flight control computer that is the source of the EMI.

That modification will be tested in the coming weeks both in the lab and on the vehicle itself before resuming flight tests. The company now expects that powered test flight to take place in May.

Michael Colglazier, chief executive of Virgin Galactic, said the company is sticking to the flight test program it announced last fall. The May flight will be followed by two more: one with two pilots and a “full cabin” of company employees to test the passenger cabin of the vehicle, followed by one with company founder Richard Branson on board. Colglazier said the company isn’t yet announcing specific dates for those flights, but expects both to take place this summer.

That will be followed by a flight for the Italian Air Force, confirming an agreement signed in October 2019. That flight will carry a set of research payloads and three Italian payload specialists, and generate revenue for the company. Colglazier said that flight would likely take place in late summer or early fall and generate revenue for the company, “and will conclude our product test program.”

At the same time as the company puts the current SpaceShipTwo, called VSS Unity, through its final test flights, Virgin Galactic will begin testing of its next suborbital vehicle, which the company announced will be called SpaceShip III. That class of vehicles features a “modular design” that will result in a higher flight rate and better maintainability, he said.

The first SpaceShip III vehicle will be rolled out March 30 and begin flight tests in the summer. Colglazier said that flight test program will include four glide flights and four powered test flights, with the powered flights to space producing revenue, although he did not explain in what way. Some SpaceShipTwo test flights have generated limited revenue by flying payloads through NASA’s Flight Opportunities program.

After those tests, he said there will be a “multi-month period” to make changes to the vehicle before a final glide flight and powered flight. At the same time, Virgin Galactic will “implement enhancements and accelerate some long-term maintenance updates” to the WhiteKnightTwo carrier aircraft, VMS Eve, used by both Unity and SpaceShip III. Unity will also undergo “some additional enhancements” at the same time.

That means that, starting in the fall, Virgin Galactic will stand down from either test or commercial flights for about four months, delaying the start of commercial flights of Unity. “At the conclusion of this period, we expect that VSS Unity will begin flying private astronauts and SpaceShip III will be in a position to complete its flight testing, which we expect to be in early ’22,” Colglazier said.

This latest delay appeared to alarm some analysts on the earnings call, but Colgalzier attempted to downplay the schedule slip. “I don’t think this is a big slip at all. I think we’re pushing our flight eight to nine weeks,” he said. That eight to nine weeks refers to delay from the previously scheduled Feb. 13 flight, but that flight is a repeat of a flight that was aborted in December.

Moreover, Virgin Galactic has experienced years of delays in development and testing of SpaceShipTwo: more than a decade, going back to original pronouncements by Branson when he announced the creation of Virgin Galactic in 2004 and its intent to leverage technology developed by Scaled Composites’ SpaceShipOne, the suborbital spaceplane that won the $10 million Ansari X Prize that year.

Analysts were also worried about the company’s burn rate, particularly as Colglazier announced additional projects, such as development of a fourth-generation “Delta-class” version of the spaceplane and a new carrier aircraft.

Colglazier declined to say when the company anticipated achieving break-even, but he noted the company was losing about $60 million per quarter but had $666 million of cash on hand as of the end of 2020. “We are well-capitalized,” he said.

However, Jon Campagna, Virgin Galactic’s outgoing chief financial officer, said the company would be “opportunistic about raising capital to further our strategic objectives,” similar to a secondary stock offering the company performed in 2020 that raised $441 million. Virgin Galactic announced Feb. 25 that Campagna was leaving the company at the end of the month, and that it had hired Doug Ahrens as its new chief financial officer, effective March 1.

Fast-switching structural colour could be used in low power video displays
Kendall: If China can’t beat the U.S. in the air it will try in space
Climate Week: Getting it done and making it real
Toast’s three co-founders are all billionaires after company’s IPO
Twitter Super Follows has generated only around $6K+ in its first two weeks