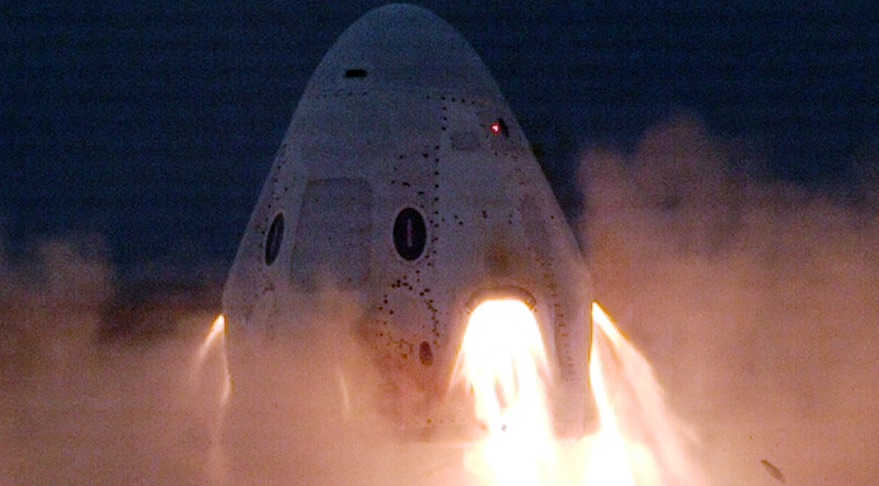 WASHINGTON — SpaceX successfully tested Nov. 13 the thrusters used as part of the abort system for its Crew Dragon spacecraft, nearly seven months after a similar test resulted in the loss of another spacecraft.

The test of the Crew Dragon’s SuperDraco thrusters took place shortly after 3 p.m. Eastern at Cape Canaveral, Florida. SpaceX, in a single tweet, said a “full duration” static-fire test of the launch escape system was completed and that both the company and NASA are reviewing data.

NASA, in a separate statement, said that the eight SuperDraco engines fired for about nine seconds. Immediately before those engines fired, two of 16 smaller Draco thrusters fired twice, for one second each time. After the SuperDraco engines shut down, the thrusters’ protective flaps closed and two Draco thrusters fired to simulate the procedure by which the capsule would reorient itself for reentry.

The static-fire test was a prelude to an in-flight abort test, where the Dragon capsule will escape from a Falcon 9 rocket about 90 seconds after liftoff from the Kennedy Space Center in Florida. That test will demonstrate the ability of the launch escape system to operate during conditions of maximum dynamic pressure during ascent. The company did a pad abort test of the system in 2015.

SpaceX was preparing for a similar static-fire test April 20 with another Crew Dragon spacecraft, which previously flew the Demo-1 uncrewed mission to the International Space Station in March, when an “anomaly” took place that destroyed the spacecraft. In July, NASA and SpaceX announced that the failure was linked to a leaking component in the SuperDraco propulsion system that allowed nitrogen tetroxide oxidizer into helium tubes that, when pressurized, hurled that propellant into a titanium valve, igniting it.

That investigation was still being wrapped up when Kathy Lueders, NASA commercial crew program manager, presented an update on the program an at Oct. 30 meeting of the NASA Advisory Council’s human exploration and operations committee. Since the accident, she said, teams have been doing testing of changes to the propulsion system, “making sure that the systems that are in place are robust for the same type of failure.”

The vehicle used for the new static-fire test was originally built for Demo-2, a crewed test flight to the ISS. That same spacecraft will be used for the in-flight abort test, with another Crew Dragon spacecraft being moved up for the Demo-2 mission some time in 2020. Lueders said it was a “pretty phenomenal turnaround” by SpaceX that slipped the test schedule by only a little more than half a year.

At the time of that briefing, Lueders said SpaceX was planning the in-flight abort test for early December. Neither NASA nor SpaceX confirmed that date or offered another after the static-fire test. “SpaceX and NASA will now review the data from today’s test, perform detailed hardware inspections, and establish a target launch date for the In-Flight Abort Test,” the agency said in its statement.

Besides a potential in-flight abort test, SpaceX has two orbital Falcon 9 launches planned for December, one of a Dragon cargo spacecraft to the ISS Dec. 4 and the other of a commercial geostationary communications satellite later in the month. Also on tap for December is the uncrewed Orbital Flight Test of Boeing’s CST-100 Starliner commercial crew spacecraft, currently scheduled for no earlier than Dec. 17.