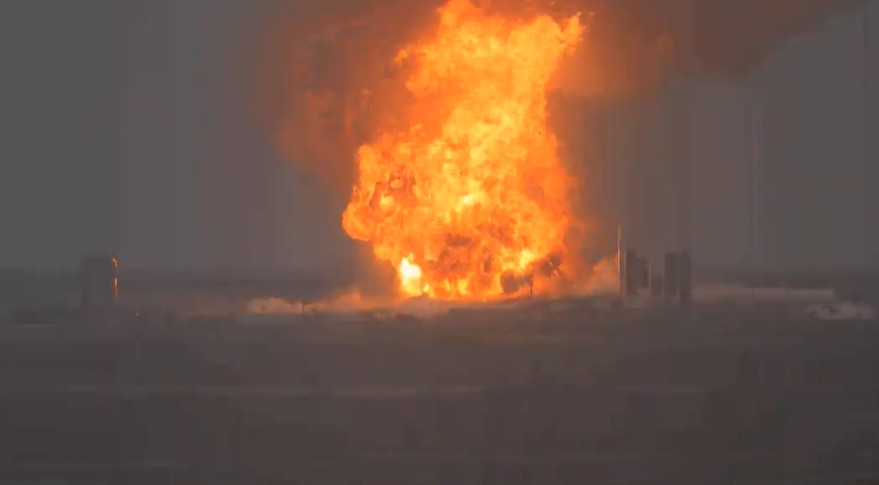 WASHINGTON — A SpaceX Starship prototype was destroyed in an explosion May 29 shortly after what appeared to be a successful static-fire test.

The Starship SN4 vehicle had just completed a static-fire test at SpaceX’s test site at Boca Chica, Texas, when it was enveloped in a fireball that appeared to emanate from the base of the vehicle at 2:49 p.m. Eastern. The vehicle was destroyed in the test, but there were no reports of injuries. The area around the launch site is evacuated before such tests.

SpaceX appeared to be moving toward the first free flight of a Starship prototype using this vehicle. The company received a launch license from the Federal Aviation Administration’s Office of Commercial Space Transportation May 28, the same day the company carried another static-fire test without incident. The FAA has also issued restrictions for the airspace above the test site for June 1 and 2 consistent with a “hop” test.

SN4 is the fourth Starship prototype that has been destroyed in testing in a little more than six months. The company’s Starship Mark 1 vehicle, unveiled at a media event in September 2019, was destroyed in November during a cryogenic pressurization test. A second, SN1, was lost in a similar test Feb. 28. A third prototype, SN3, crumpled in an April 3 test, apparently because of a misconfigured test setup.

The company appeared to have more success with SN4, completing a pressurization test April 27, followed by several static-fire tests using a single Raptor engine. Those tests, and the FAA license, suggested a flight test, at least to a very low altitude, was imminent.

SpaceX has already been working on additional Starship prototypes, with observers at the Boca Chica test site seeing work on the SN5 and SN6 vehicles as well as initial hardware for an SN7 vehicle.