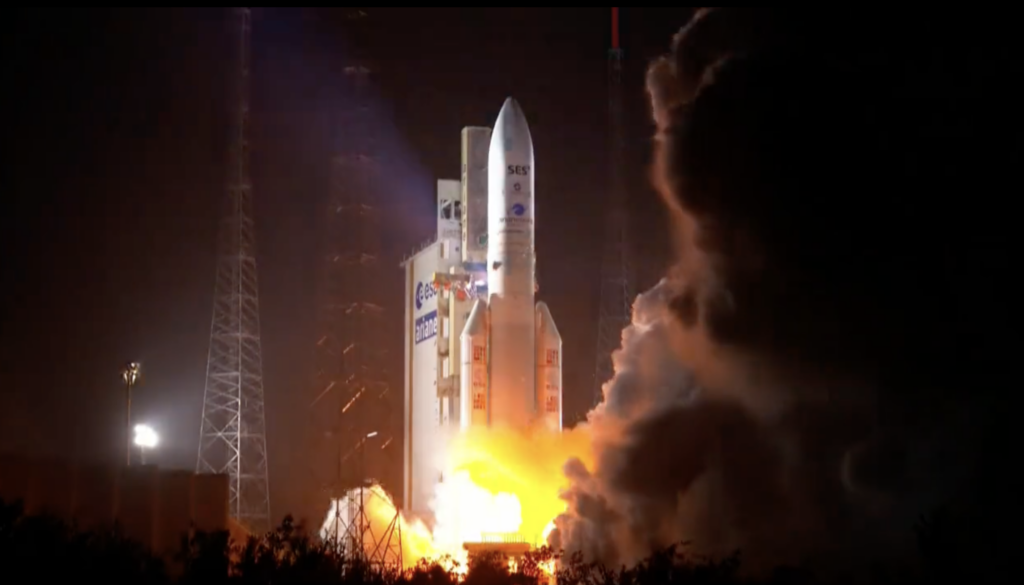 TAMPA, Fla. — Arianespace has successfully launched the heaviest satellite SES has ever ordered, marking a cornerstone for a multi-orbit network that is seeing surging demand from commercial aviation customers.

Weighing roughly 6,400 kilograms, the all-electric SES-17 satellite lifted off from French Guiana Oct. 23 at 10:10 a.m. Eastern on an Ariane 5 rocket, which also carried the Syracuse 4A communications satellite for France’s military.

Built by Europe’s Thales Alenia Space, SES-17 is one of the first in a growing trend of fully software-defined satellites, fitted with nearly 200 spot beams that are reprogrammable in-orbit to respond to changing mission needs.

SES said the digital transparent processor (DTP) onboard SES-17 will be the most powerful in orbit. The satellite is expected to reach its 67.1 degrees West orbital slot in mid-2022, covering the Americas, the Atlantic Ocean and the Caribbean

The operator expects SES-17 will be “the anchor for our growth for the next several years,” SES CEO Steve Collar told an Oct. 20 media briefing.

Designed in concert with a virtualized ground network developed in partnership with cloud giant Microsoft, Collar said customers will be able to roam as needed from SES-17 to O3b mPower, the upgraded broadband constellation it aims to start deploying in medium Earth orbit (MEO) early next year for lower latency services.

Serving the aviation market will be SES-17’s primary mission, Collar added, and it has signed up in-flight connectivity provider Thales InFlyt Experience as anchor customer.

As airlines transition to a free-to-consumer business model over the next three to five years, Thales InFlyt Experience vice president Craig Olson sees “upward of potentially 10 times the amount of demand that we have seen, even in recent times” for in-flight connectivity.

Even with this increase in demand, Olson said SES-17 “in and of itself will be able to serve upward of 50% of the entirety of the traffic that would flow in the Americas.”

He added that the in-flight connectivity (IFC) market is fiercely competitive, and there are many rivals also after this opportunity.

Collar expects penetration per aircraft will rise from the midteens to 70-80% over the three to five year period as airlines move away from charging passengers directly for Wi-Fi to attract business.

Spirit Airlines, which focuses on the North American market, will effectively be the launch airline for SES-17 services through Thales InFlyt Experience.

Olson declined to discuss other airline partners. He pointed to Spirit and other airlines’ expectations of returning to profitability before the end of 2022 — earlier than the market expected amid the pandemic — as boding well for future demand.

Upward of 50% of air traffic over the next five to 10 years will also be in or originate within the Americas, according to Olson.

With their promise of adapting to changing capacity needs, software-defined satellites like SES-17 could soon become the norm for those in geostationary orbit as they become more economically viable.

About 14% of the satellites launched to GEO had “some sort of flexibility” in their design, according to Northern Sky Research consultant Brad Grady, compared with the 73% he expects to see in 2030.