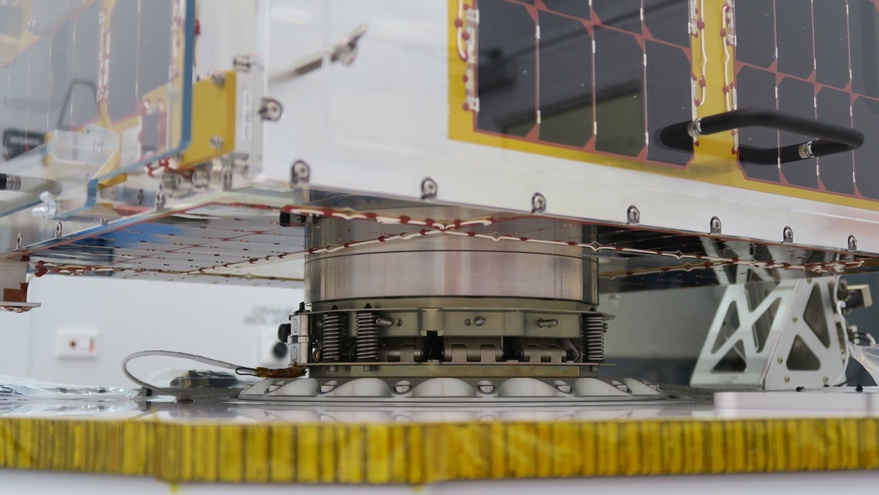 LAS VEGAS — Rocket Lab announced Nov. 15 that it is acquiring Planetary Systems Corporation (PSC), a manufacturer of satellite separation systems, in the second such deal by Rocket Lab in as many months.

Rocket Lab said it will purchase Maryland-based PSC for $42 million in cash and 1.72 million shares of stock. The deal includes an earnout bonus of up to 956,000 additional shares based on PSC’s financial performance in 2022 and 2023. That puts the total value of the deal, based on the closing price of Rocket Lab’s stock Nov. 15, at $81.4 million.

PSC makes systems to allow the deployment of satellites from launch vehicles. That includes its Lightband line of satellite separation systems and its Canisterized Satellite Dispenser for deploying small satellites. Those systems, Rocket Lab said, have a 100% success rate over more than 100 missions.

“[PSC founder] Walt Holemans and his team have built an extraordinary business based on best-in-class products that are reliable,” Peter Beck, chief executive of Rocket Lab, said in a Nov. 15 earnings call about his company’s third quarter financial results.

“Adding PSC to the Rocket Lab team continues the execution of our strategy of expanding product portfolio with best-in-class product offerings,” he said, adding that he believed “there are meaningful synergies that can be achieved post-acquisition in shortening lead time, scaling production and driving cost to provide our customers with an even better service offering than they’ve had before.”

The PSC deal is the second acquisition in as many months for Rocket Lab. The company announced Oct. 12 it had purchased Advanced Solutions, Inc. (ASI), a Colorado-based engineering company that develops flight software, simulation systems and guidance, navigation and control (GNC) systems. Rocket Lab paid $40 million for ASI.

In an interview at the time of the ASI deal, Beck said Rocket Lab was looking into up to a half-dozen additional acquisitions, taking advantage of its cash and publicly traded stock from a merger with a special purpose acquisition company (SPAC) that closed in August. “There are some really fantastic companies out there that, when combined with Rocket Lab, can really scale,” he said then.

“The kind of acquisitions we’re looking to make here are ones that technologies that we use and we trust and we know super well, and that are best-in-class,” Beck said in the earnings call. That will create what he called “a cabinet of capabilities that we can deploy, not just in our own systems but on others as well.”

Rocket Lab reported $5.3 million in revenue in its third quarter, slightly above projections of $4–5 million because of higher performance by its space systems unit. The company reported an adjusted earnings before interest, taxes, depreciation and amortization (EBITDA) of –$17.5 million, within its projected range of a loss of $17–20 million.

The company said it is planning two Electron launches in the fourth quarter, both for BlackSky through a contract arranged by Spaceflight. The first of those two launches is now scheduled for Nov. 17 after delays caused by a sensor problem and poor weather.

Rocket Lab executive didn’t give projections for launches in 2022, but said they expected a higher cadence than 2021, which was affected by both an Electron launch failure and pandemic lockdowns in New Zealand that postponed launches. “We have a pretty healthy manifest going into the first half of 2022,” Adam Spice, Rocket Lab’s chief financial officer, said on the earnings call.

He added that the company is still waiting for NASA to complete certification of an autonomous flight termination system the company needs to launch from Wallops Island, Virginia. Delays in NASA’s certification of that system has, in turn, delayed the use of Launch Complex 2 there for Electron missions. “The current expectation is that it could be done as early as the end of the year,” Spice said of that certification, “which would allow us to commence flight operations out of LC-2 and Wallops in the first half of 2022.”