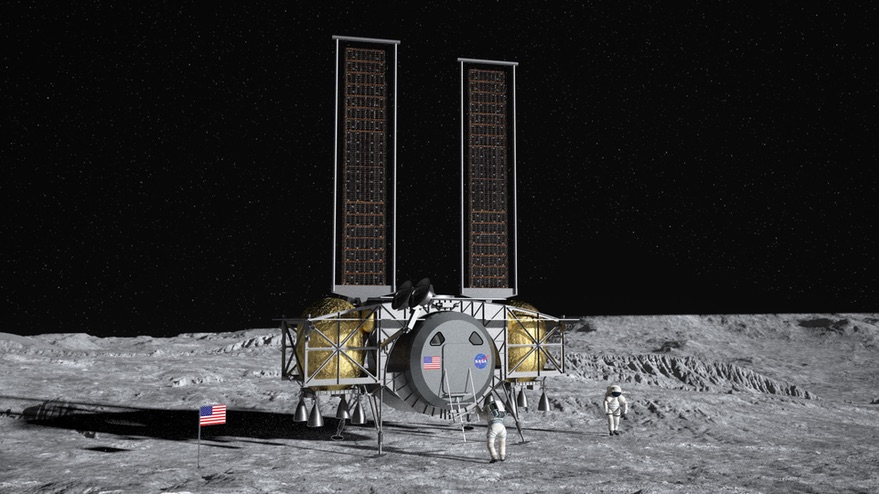 WASHINGTON — NASA officials say the agency is still planning to make selections as part of its Human Landing System (HLS) program by the end of next month as it takes into account the reduced funding for the program.

The “base period” awards made in April 2020 to teams led by Blue Origin, Dynetics and SpaceX are set to end April 30. That deadline includes a two-month extension to the contracts NASA made in January to give the agency more time to evaluate the proposals those companies submitted for follow-on “Option A” awards to fund development and flight demonstrations of their proposed lunar landers.

At a March 26 virtual meeting of the Space Transportation Association, Jody Singer, director of NASA’s Marshall Space Flight Center, offered few updates about the HLS program, citing the ongoing “blackout period” as those Option A proposals are evaluated. Marshall is the lead center for the HLS program.

“The contracts have been extended to April 30, but downselects are pending,” she said. Other agency officials have said NASA plans to select up to two of the three companies for Option A awards, with the preference for two in order to maintain competition in the program.

In a March 17 interview, NASA Acting Administrator Steve Jurczyk said the agency expected to make awards by the end of April, although hinted it might slip slightly beyond that. “Our target is still the end of April. That might go into May a little bit,” he said.

Jurczyk said the two-month delay was requested by the HLS program to give it more time to evaluate the Option A proposals. “They just needed more time to do the work,” he said. “For something this large and complex it often takes a little bit more time.”

The delay, he argued, was not linked to the budget for the HLS program. NASA received $850 million for HLS in fiscal year 2021, about one quarter of its original request. “It really was the complexity of the evaluation. The budget is a separate discussion,” he said.

The budget may not affect the evaluation of the proposals, but will affect the progress the HLS program can make. The reduced funding for HLS compared to the request all but ruled out a 2024 human lunar landing, the goal set by the Trump administration two years ago.

The Biden administration has endorsed the Artemis program but has been silent on when humans would return to the moon. That endorsement came a day after 11 Democratic senators asked the White House to provide “robust funding” for HLS. The White House is expected to release as soon as this week an outline of its fiscal year 2022 budget proposal, highlighting priorities for discretionary spending at agencies such as NASA, although a full budget proposal may not be released until May.

Jurczyk, in that earlier interview, said NASA was looking for ways to cut costs for programs like the Space Launch System in order to free up funding for other exploration efforts, including HLS. “We are not counting on very large budget increases, so if we want to have a reasonable cadence of Artemis missions and have the funding to develop the Human Landing System and surface systems, we need to try to get those SLS per-launch costs down,” he said.