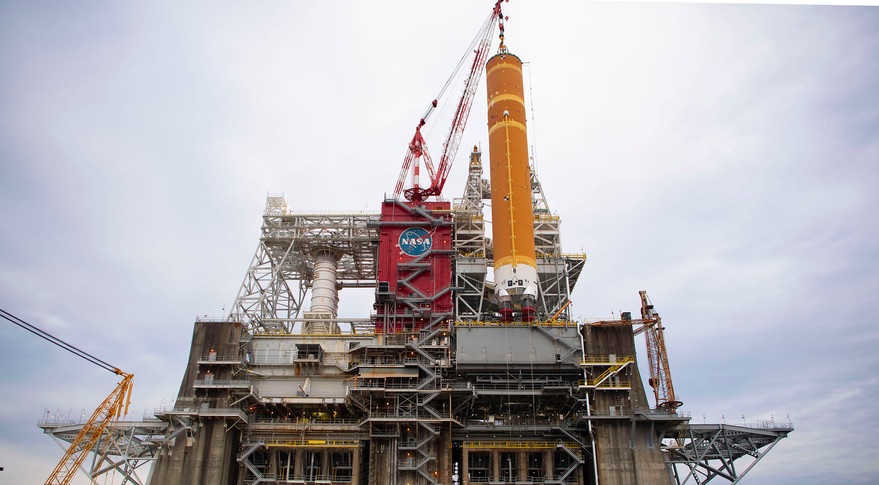 WASHINGTON — The latest in a series of delays in a test campaign for the core stage of the Space Launch System now leaves “very little margin” in the schedule for its launch next November, NASA managers said Dec. 10.

NASA had planned to conduct a test known as a “wet dress rehearsal” of the SLS core stage at the Stennis Space Center Dec. 7. In that test, the core stage is loaded with liquid hydrogen and liquid oxygen propellants and goes through a countdown that stops just a half a minute before ignition of the stage’s four RS-25 engines. The wet dress rehearsal is the final milestone before a full-duration static-fire test of the engines that wraps up the overall Green Run test campaign.

In the early phases of the wet dress rehearsal, engineers successfully loaded a small amount of liquid hydrogen into the stage and saw no signs of leaks or other problems. However, when starting to load liquid oxygen, they found that the propellant was not as cold as required.

“It’s really an integrated issue between the facility and the core stage,” said Julie Bassler, SLS stages manager at NASA’s Marshall Space Flight Center, in a call with reporters. Models of how the liquid oxygen temperature would change as it was transferred through the test stand and into the tank didn’t match what engineers saw, with temperatures about 2.2 degrees Celsius warmer than required for the test.

The difference appears minor, but is intended to prevent the formation of gas bubbles in a long feed line in the core stage, said John Honeycutt, SLS program manager at NASA Marshall. Those bubbles could then collapse, releasing energy as the liquid oxygen above it falls.

Honeycutt emphasized that the issue was not a flaw with the core stage itself. “There’s not anything wrong with the rocket,” he said. “This is an operational activity associated with how we load the liquid oxygen, and I have a high level of confidence that the team is going to be able to fix it. It’s going to have to be on the ground side to do that.”

NASA is coming up with new procedures for loading the liquid oxygen into the core stage, and is tentatively planning to reschedule the wet dress rehearsal for the week of Dec. 14. That would then allow them to proceed with the hotfire test as soon as the last week of December.

If that test schedule holds, the core stage would be shipped to the Kennedy Space Center in February, where it be mated to its two solid rocket boosters, upper stage and Orion spacecraft for the Artemis 1 mission. That schedule would still allow the Artemis 1 launch to take place in November 2021.

However, Honeycutt acknowledged that there’s little margin for any additional delays. “We’re getting to a point where we’ve got very little margin left in the schedule relative to our commitment to our delivery date,” he said. The overall margin in the Green Run test has been eroded by various issues, from a closure of the center in the spring because of the pandemic to a series of shorter closures because of tropical storms and hurricanes, as well as technical issues with the test campaign itself. “The margin that we had built into the schedule for the Green Run is getting pretty slim.”

He said he has been in discussions with the Kennedy Space Center about coordinating activities there, such as stacking the solid rocket booster segments. Once stacked, the boosters have to be flown within a year. He said it’s likely that booster stacking work can proceed after the wet dress rehearsal is complete.

Honeycutt added he was confident that, once the liquid oxygen loading issue was resolved, the remainder of the Green Run test campaign will go quickly. That confidence was bolstered by the lack of hydrogen leaks, a problem during the shuttle program, found during the initial wet dress rehearsal effort. “We’re likely to see some small things we’ll have to go work,” he said. “We’ve learned enough to know that, in all likelihood, we’re not going to have a big issue that causes us to stand down for any significant amount of time.”

Officials, though, will still be nervous about the hotfire test itself. “Once the thing starts firing, I guess I’m going to see if I can hold my breath for 480 seconds,” said Maury Vander, chief of test operations at Stennis. “It should be a heck of a ride.”