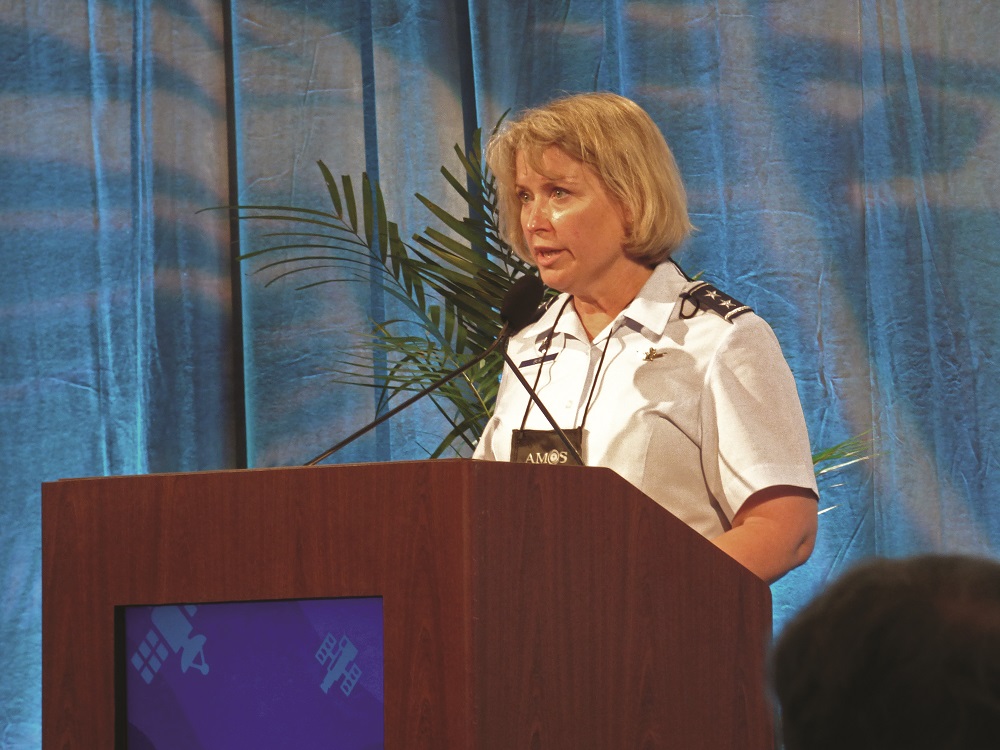 The reality is far different. Defunct aircraft don’t linger in airspace for years or decades, unlike satellites. Aircraft also have the ability to maneuver, which debris and even some satellites lack. And air traffic controllers have clear authority on a national level, and coordinate internationally, to direct air traffic.

The difference, she said, is that organizations like the Space Force’s 18th Space Control Squadron track objects and predict potential collisions but have little authority to prevent a collision. That’s obviously the case when the two objects are debris. “Those are bad days,” she said. “We get to watch two dead objects possibly collide and then we’re going to report what happened.”

Burt said she doesn’t have much more authority if one or both of the satellites are operational. “If that object is anything other than a U.S.-flagged Department of Defense asset, I am making them aware there is a collision, and it’s their choice what they do,” she said. “We have no authority or governance to tell them what to do.”

THE NEED FOR BETTER DATA

Without a space traffic control authority directing satellites to maneuver, it’s up to satellite operators to decide whether and how to move their spacecraft to avoid potential collisions. Operators are obviously motivated to avoid collisions not just because of the debris they produce but also the loss of revenue from a damaged or destroyed spacecraft.

When the threatened collision is between an active satellite and a piece of debris, the situation is straightforward: the satellite operator decides if the risk of collision is high enough to warrant a maneuver, weighing that risk versus the cost of propellant use that shortens the satellite’s lifetime and any disruption to services maneuvering would cause.

While that approach is straightforward, it’s not consistent. A study by commercial space situational awareness (SSA) company COMSPOC Corp., presented at AMOS, found no consensus among major satellite operators regarding the conditions they use to determine whether to perform a collision avoidance maneuver.

COMSPOC worked with the Space Data Association, a group of satellite operators that share SSA data, to see what metrics companies use to determine if a close approach is too close for comfort. Geostationary satellite operators, for example, used thresholds for potential miss distances ranging from 1,000 to 15,000 meters, and probability of collision thresholds from 1 in 10,000 to 1 in 1 billion.

“The criteria and the thresholds they were using are all over the map,” said Dan Oltrogge, director of integrated operations and research at COMSPOC. “Maybe it’s unrealistic to expect that they wouldn’t be different because each operator has varying levels of sophistication and varying levels of resources and SSA data they have access to. But, it was striking for us just how different these things are.”

The problem is exacerbated by the SSA data that operators use. “Typical data is not meeting their needs,” he said. “It’s not accurate enough to use it in the manner that it’s being used.”

The solution is what Oltrogge called “data fusion,” combining freely available SSA data from the U.S. government with commercial sources and data from other satellite operators. Improved modeling is also key, he said, such as using more accurate dimensions of a satellite rather than approximating it by a sphere.

“If you can bring that into a comprehensive data fusion system where it’s blended with government SSA observations and commercial SSA observations, that’s when you can really get accurate and actionable SSA products,” he said.

What happens, though, when two operational satellites, owned by different organizations, are in danger of colliding? Only one needs to move to avoid a collision, but which one should have to make the effort to maneuver?

There are no rules, or even guidelines, about which satellite has the right of way in such scenarios. “For right of way, the regulatory framework is please don’t crash your satellite, and really please don’t crash it into somebody else,” Ruth Stilwell, executive director of Aerospace Policy Solutions, said during a panel discussion at AMOS.

Such close approaches are becoming more common in low Earth orbit as the number of satellites increases. SpaceX’s Starlink constellation, with nearly 1,700 satellites in orbit today, has contributed to many of those, such as one in September 2019 when the European Space Agency said it moved an Earth observation satellite, Aeolus, to avoid a close approach with a Starlink satellite after complaining of a lack of coordination with SpaceX.

After that incident “we went to work on coordinating,” said David Goldstein, principal guidance, navigation and control engineer at SpaceX. That includes an agreement with NASA announced in March where SpaceX agreed it would move its Starlink satellites in the event of any close approaches with NASA satellites.

That hasn’t eliminated all such problems. In April, OneWeb said it had to move one of its satellites just days after its launch from Russia in late March when Space Force SSA data predicted a close approach to a Starlink satellite. The two satellite operators coordinated, but OneWeb later claimed in the media that SpaceX was unable or unwilling to move its Starlink satellite, requiring OneWeb to maneuver. SpaceX said in FCC filings that it concluded the risk of a collision was below its threshold for performing a maneuver, but that OneWeb elected to move its satellite anyway.

Relations between the two companies have improved since then, Goldstein said. “We have a great working relationship with OneWeb after that conjunction in March. Just fantastic coordination at the operational level.”

“Bilateral agreements are necessary and problematic,” Stilwell said of agreements like the one between NASA and SpaceX. The problematic part, she explained, is that a bilateral agreement “doesn’t create a standard throughout the community, so we need more visibility into willingness and desire to reach that standard so we can self-organize.”

With no near-term prospect of an overarching space traffic control authority, she argued the best approach to reducing collision risks between satellites is a self-organized network of satellite operators that agree upon standards for who should maneuver and in what circumstances.

That approach requires operators to share more data. “That includes a reasonable expectation of what the other actors will do as well as knowledge about their health, ability and capability,” she said. “We’re not looking for your business model, your competitive information, your mission purpose, but instead the safety data we need to extract so that we can all operate more safely.”

Technological approaches, like the blockchain, might overcome any wariness about sharing such data. “Putting all these things into automated processes helps overcome that trust issue, because it takes the human out of that decision-making process,” she said. “It’s not easy, but it’s a path we can start to go down.”

AN FAA FOR SPACE

Those approaches are not meant to fully replace government organizations to manage, or at least assess, space traffic. Many in the industry continue to look to the U.S. Commerce Department, through its Office of Space Commerce within NOAA, to take over civil STM responsibilities as described in Space Policy Directive 3 in 2018.

Recent progress has been slow, though, with the Office of Space Commerce lacking a full-time director since the start of the Biden administration. Those frustrations boiled over at a House Science Committee hearing Sept. 23, where Rep. Brian Babin (R-Texas) questioned NOAA Administrator Richard Spinrad about the lack of progress.

“We are taking very specific actions,” Spinrad responded, including development of an open-architecture data repository that will combine SSA data from government and commercial sources. An interagency demonstration of that system will take place in several weeks, after which he said his agency would show it to Congress.

While the National Academy of Public Administration, in a study more than a year ago, endorsed giving the Commerce Department civil STM responsibilities, Spinrad added the department was still studying how to best organize it. “It requires careful consideration of the operational responsibilities and regulatory responsibilities,” he said. “We’re looking at alternatives, and we’ll have that analysis of alternatives ready very shortly.”

That would ultimately turn the Commerce Department, she added, into the “FAA for space” by giving it the same responsibilities and authorities that the FAA has for air traffic control. “We would have a civil organization for the United States, but which could also grow internationally, that would allow for the creation of how we would do space traffic management,” she said.

“In this case, the word ‘management’ applies because they would have the governance and authorities,” she added. At the current rate of progress, though, Burt and others may still be assessing, rather than managing, space traffic for years to come.

This article originally appeared in the October 2021 issue of SpaceNews magazine.

ESA ministers approve strategy to work on terrestrial and space safety issues
China’s Baidu wants to launch its driverless robotaxi service in 100 cities by 2030
It’s a snap: the friction-based physics behind a common gesture
Interest in SPAC mergers declining
Everything You Need to Know About Buying Binoculars for Birdwatching