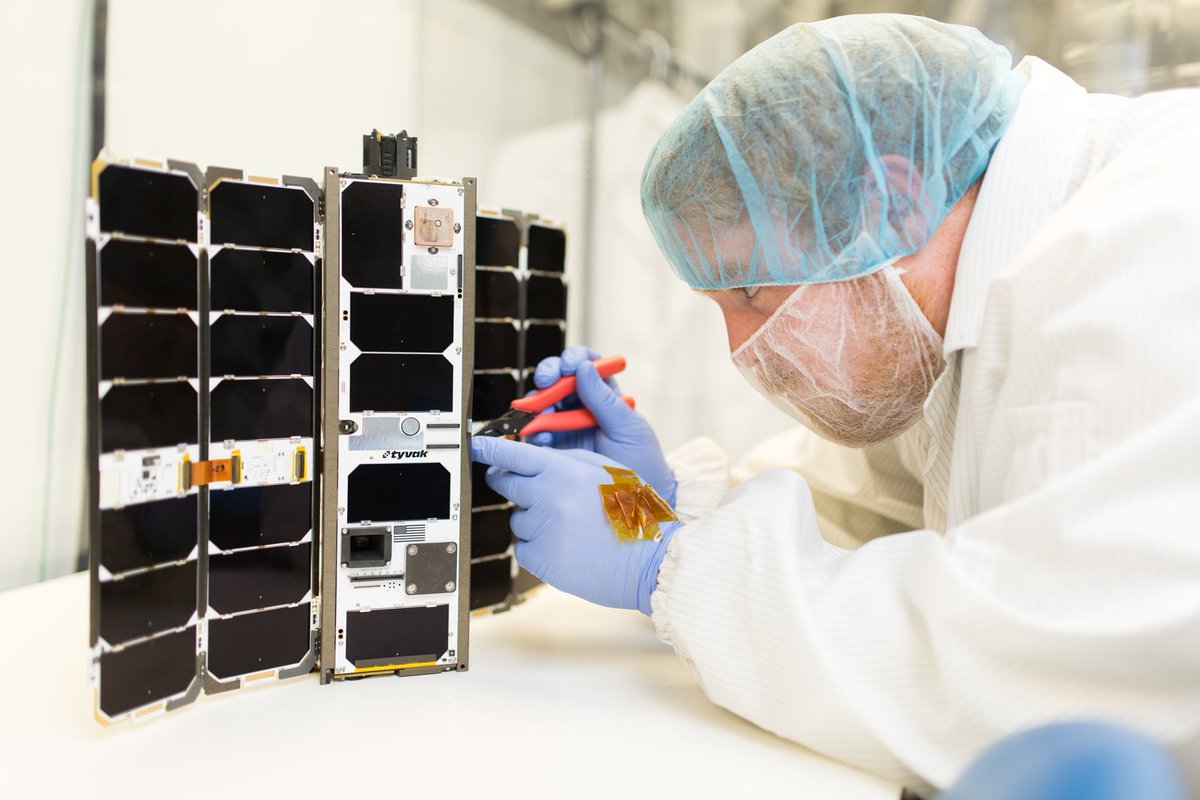 Anders Johnson, Echostar’s president, said during a Nov. 7 earnings call that EchoStar has signed contracts for the construction and launch of a first batch of satellites “at a cost of less than $10 million.”

“We will be standing up a network and conducting tests across the network probably by late 2020, and certainly by the first quarter [of] 2021,” Johnson said.

Though Johnson didn’t identify the spacecraft vendor by name, EchoStar spokeswoman Sharyn Nerenberg told SpaceNews Nov. 13 that Tyvak is building two nanosatellites for EchoStar, with an option for a third.

Johnson said EchoStar paid $26 million to acquire Helios Wire, a Canadian startup that had launched the first of 28 planned smallsats to provide data connectivity for Internet of Things applications from low Earth orbit.

With Helios Wire newly under its control, EchoStar still hasn’t decided on a constellation size, Johnson said. EchoStar’s first priority, he said, is to secure S-band spectrum that Helios Wire had access to through a spectrum filing with the International Telecommunication Union.

Helios Wire’s ITU filing for worldwide S-band mobile satellite services was made through its Australian subsidiary Sirion Global, which EchoStar has since rebranded as EchoStar Global Australia.

EchoStar’s S-band reach — using its Echostar-21 satellite and a partly operational payload on Eutelsat-10A — has so far been regional, mainly focused on Europe.

“What Sirion brings to the table is the ability to fill in the gaps to provide what could be a global solution in the band,” Johnson said.

Johnson said that the ITU filing faces an April 2021 utilization deadline EchoStar is preparing to meet through the use of its Tyvak-ordered satellites.

“Our initial focus will be to bring their filings into use with this first flight of nanosats, and then assess our strategy going forward depending on the opportunity,” Johnson said.

Once that regulatory process is complete — by launching at least one of the S-band Tyvak satellites, operating it for 90 days and filing the requisite paperwork — EchoStar will decide on a longer-term strategy, he said.

“We are in discussions with a number of potential customers about putting together a network which would present global coverage, and depending upon the pace of those discussions and the levels of commitment, that will regulate our willingness to move forward with a plan to more fully populate the network,” he said.

Johnson and Nerenberg did not explain why EchoStar is launching its own satellites to meet ITU requirements instead of using Helios Wire’s Pathfinder 2 satellite that SpaceX launched late last year as part of Spaceflight’s SSO-A rideshare mission.

In a filing with the U.S. Securities and Exchange Commission, EchoStar said it intends to evaluate S-band technologies that could lower the cost of IoT satellite communications, plus other services such as public protection and disaster relief.

Anders said EchoStar has yet to determine how its new non-geosynchronous orbit initiative will integrate with with geostationary S-band efforts, which are run through a division called EchoStar Mobile. But EchoStar is already working on customer devices that would work with S-band satellites regardless of orbit, he said.

“Many of the devices that we’re contemplating developing or indeed developing will look indifferently at a GEO asset in the band or an NGSO asset in the band, and that’s the whole point is that we have the opportunity here to create a networking capability with a lot more bandwidth than available by the existing global networks that currently exist,” he said.

EchoStar reported a loss of $21.1 million on revenues of $472.3 million for the months of July, August and September. The company said its North American Ka-band capacity is extensively used, limiting room for growth in its lucrative satellite broadband business.

EchoStar said the launch of Jupiter-3 in 2021 will provide fresh Ka-band capacity in North and South America. Maxar Technologies is building the satellite. EchoStar has not yet announced a launch provider.

EchoStar invested $100 million last year for a 20% stake in a joint venture with Yahsat called Broadband Connectivity Solutions, which Kaul said should close this year.

Yahsat’s Al Yah 3 satellite will provide Hughes additional capacity in areas with “hot beams” that fill up quickly with subscribers, as well as in areas beyond Hughes’ current coverage, Kaul said.

EchoStar reported 1.437 million broadband subscribers as of Sept. 30, of which around 192,000 were in Central and South America.