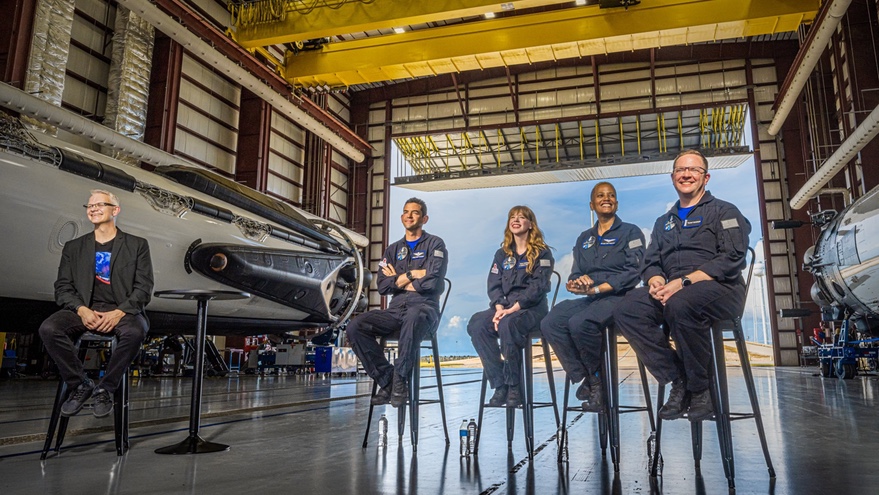 KIHEI, Hawaii — SpaceX’s first fully commercial Crew Dragon mission is being closely watched by both NASA and other companies in the commercial human spaceflight sector, who see it as a pathfinder for future missions but not necessity a model for them.

SpaceX is scheduled to launch the Inspiration4 mission on a Falcon 9 from the Kennedy Space Center during a five-hour window that opens at 8:02 p.m. Eastern Sept. 15. The rocket will place a Crew Dragon spacecraft into orbit with four people on board for a three-day mission.

During a Sept. 14 briefing, Benji Reed, senior director of human spaceflight programs at SpaceX, said preparations for the mission were going well and launch weather was favorable. He added, though, that SpaceX will also have to take into account recovery weather three to four days later before making a decision to proceed with the launch.

Inspiration4 will be the fourth time that SpaceX has launched humans, but the first that is not part of NASA’s commercial crew program. Billionaire Jared Isaacman is funding the mission, which he says is intended to be a fundraiser for St. Jude’s Childrens Research Hospital. He has not disclosed how much he is paying for the mission, although independent estimates suggest it may be as much as $200 million.

While NASA is not involved in the mission, agency leadership sees it as a vindication of its overall approach to commercialize low Earth orbit. “It’s another opening up of space,” NASA Administrator Bill Nelson said when asked about Inspiration4 during an appearance at the Humans to Mars Summit by Explore Mars Sept. 14.

“NASA is not involved in it because this is a totally commercial operation,” he said. (NASA is providing a small amount of resources, such as satellite communications, for the mission, for which SpaceX is reimbursing NASA an estimated $1 million.) “It’s another example of where we’d like to go in Earth orbit eventually.”

NASA’s long-term goal for the commercial crew program is to be one of several customers for transporting people to and from low Earth orbit, reducing the agency’s cost. SpaceX has announced contracts with Axiom Space for a series of missions to and from the International Space Station as well as with Space Adventures for a Crew Dragon mission that, like Inspiration4, goes into orbit but does not dock with the ISS.

“We have a growing backlog of commercial astronaut missions that we’re looking forward to performing,” Reed said at the Inspiration4 briefing. He did not discuss details about that backlog beyond the first Axiom Space mission, Ax-1, scheduled for early 2022.

“We’re gearing up to fly three, four, five, six times a year, at least,” he said later of the potential Crew Dragon flight rate. “There’s nothing that really limits our capability to launch. It’s about having rockets and Dragons ready to go.”

Companies that are planning to fly future commercial Crew Dragon missions say they’re watching the upcoming Inspiration4 flight with interest, even if the one-off mission is different from what they’re planning. “We are all following the Inspiration4 mission as closely as any fan of the growth of human space exploration,” Axiom Space spokesperson Beau Holder told SpaceNews Sept. 14. “It brings new awareness and interest to commercial spaceflight and that is a positive thing for not only our own missions, but the efforts of everyone across the industry.”

However, he suggested the preparations for that mission may not help much with Ax-1, training for which by its four-person crew is already underway. “As Axiom’s private missions are planned to visit ISS and with profiles more closely approximating previous government ones, a closer analogue for lessons learned would be the NASA crew missions.”

“We are excited for the upcoming Inspiration4 launch and wish Jared and his crew the best,” Space Adventures spokesperson Stacey Tearne said Sept. 14. “With each flight, more people become aware that opportunities exist for non-professionals to launch to space, no matter the profile.”

Space Adventures, best known for sending space tourists to the ISS using spare seats on Soyuz missions in the early 2000s, is preparing for its first dedicated mission on a Soyuz in December. Japanese billionaire Yusaku Maezawa and his assistant, Yozo Hirano, will go to the station on the Soyuz MS-20 mission in December, commanded by Russian cosmonaut Alexander Misurkin. They will spend 12 days at the station before returning to Earth.

The company hasn’t provided an update on its plans for a Crew Dragon mission it announced in February 2020. That mission would spend several days in space at an orbital altitude about twice as high as the ISS. That would be higher than even Inspiration4, which will fly at about 575 kilometers, the highest crewed mission since the final shuttle servicing mission of the Hubble Space Telescope in 2009.

Reed said SpaceX is using Inspiration4 and other missions to adjust its overall training process and look for ways to shorten it. The long-term goal, he said, in an “airline-like” model with very little training, which he said is necessary to achieve SpaceX’s ultimate goals of sending millions of people into space.

“As we look for ways to evolve toward that airline-like model, we’ll look for how we can cut back on the amount of training that is necessary to ensure safety,” he said.

Perseverance collects first Mars samples
Natural gas has only done this twice in the last decade, and it could mean more pain ahead, charts suggest
The network effect is anti-competitive
COVID research prizes, CRISPR-like enzymes and a face-mask trial
Breeding the sweetest biofuels in the business