On twitter, the show has also reignited an important discussion on nuclear power and its associated hazards. It is necessary to acknowledge that while some risks will always be there, nuclear power is actually safer than ever, and importantly, it could help curb our insatiable appetite for fossil fuels.

To learn more about this funky world of radioactive physics, we’re going to answer some questions about how our nuclear landscape has changed since 1986 (I’d say spoiler alert, but that’s not really applicable to historical events that happened decades ago).

How much nuclear energy do we use today?

As of July 2019, 416 nuclear reactors are operating in 34 countries, and they’re producing about 10.3% of the world’s electricity. That’s a marked drop from their peak share of 17.5% of worldwide electricity in 1996. Excluding China, the world’s nuclear production has actually been slowly, but steadily declining, perhaps due to increased contributions from wind, solar, and other renewable energy sectors. So, nuclear power still contributes a significant portion of power to more developed countries, but it is definitely not growing at the rate it was in the 80s, partially because countries are not investing in building more reactors. With pushes towards fossil-free energy, perhaps nuclear power will become more popular, but the global energy landscape is growing increasingly complex.

Are Chernobyl-like reactors still in use today, and are reactor cores still made of graphite?

The type of reactor used at the Chernobyl plant is called an RBMK-1000 reactor (it stands for Reaktor Bolshoy Moshchnosti Kanalnyy/High Power Channel-type Reactor). While human error, policy failures, and a lack of knowledge all played a role in the disaster, design flaws in the RBMK reactor are also to blame. One of the main issues with these types of reactors is they have what’s referred to as a “positive void coefficient”. This means that when the coolant is lost, the rate of fission would increase. During the accident, an overproduction of steam led to more fission, a huge temperature and pressure increase, which eventually led to an explosion.
After 1986, all remaining RBMK-1000 reactors underwent design updates to fix these flaws, finding 58 individual issues with the system. All RBMK-1000 reactors have graphite cores, which contain mazes of cavities that hold the radioactive uranium fuel rods. The majority of changes made focus on the reactor’s graphite core. They added more absorbers so that reactions would remain stable at low power, they increased the number of control rods in the core, and increased the fuel enrichment of uranium required at power plants. These reactors aren’t built anymore, but 10 are still operating in Russia.
In the HBO series, one of the first harbingers of disaster post-explosion were small chunks of graphite shown strewn along the ground while firefighters worked to extinguish a blazing inferno.  If the material that’s supposed to separate people from highly radioactive uranium fuel is no longer there, that’s a pretty big problem.
So, why graphite? Graphite is a cheap material, and it allowed the Russians to use lower-grade uranium as fuel. The control rods, which are supposed to slow down the rate of fission inside the core, were made of boron tipped with graphite. The boron slowed down the reaction as planned, but when the graphite interacted with the fuel as the rods are removed, it actually increased the rate of fission. So when the workers tried to slow down the reaction before the disaster, they inadvertently sped it up.
Instead of using graphite cores, reactors nowadays are designed using water as both a coolant and a moderator (a moderator helps slow down neutrons in order to make the fission process more effective). In these reactors, either light or heavy water, which are distinguished by their relative proportions of deuterium and hydrogen, are cycled through the core structure. While nothing is 100% safe, these types of reactors have faired better than the RBMK-1000.

Do people still live in Chernobyl? Is it safe? 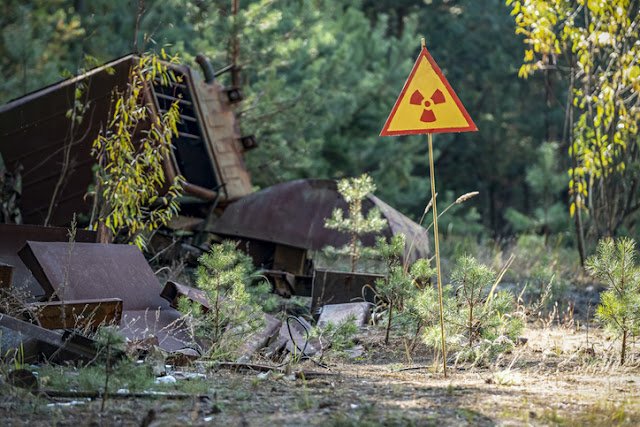 While more than 1,000 square miles around Chernobyl is officially designated as uninhabitable, and while it’s technically illegal to live within the exclusion zone, about 100 people are estimated to be living there today. Its current residents moved back during the weeks and months after the disaster because in spite of the radiation risks, it’s still home.
While some argue it’s an ecologic paradise, the soil is still heavily contaminated with radiation. From the soil, radioactive ions enter the food chain, spreading to plants and animals, predator and prey. While animals have been found with mutations, studies show that their population numbers are thriving. In a way, the benefits of a human-less environment far outweighs the dangers of nuclear contamination. So Chernobyl still isn’t a safe place to live for humans or animals, but then again, any location has its drawbacks.

Do we still use iodine pills to protect against radiation poisoning?

Apart from those who died from acute radiation poisoning at the power plant, most deaths after the Chernobyl disaster were the result of radiation-induced thyroid cancer. People who ingested iodine pills, however, were less likely to be impacted by this radiation. To produce hormones, your thyroid needs to absorb iodine, but in a normal environment, this iodine isn’t radioactive. The explosion at Chernobyl released the largest ever amount of a radioactive isotope called iodine-131 into the air. Once this radioactive iodine enters the human system, it’s absorbed through the thyroid, dispersing radiation throughout the body. The idea for iodine pills is that if enough nonradioactive iodine-127 is ingested, then this will prevent the radioactive iodine from being absorbed.

Because nuclear disasters are rare (thankfully), there is not a lot of data showing how ingesting iodine pills reduces exposure to radiation. We do know that while it may protect the thyroid against iodine-131, it doesn’t protect other organs, and it doesn’t protect against other radioactive isotopes. It’s not a catch-all “anti-radiation drug”. After the 2011 Fukushima disaster, iodine tablets were distributed to residents within a 10-mile radius of the reactor, but the effectiveness of this strategy is yet to be seen. Still, the US Nuclear Regulatory Commission is prepared to distribute iodine pills in the event of a nuclear disaster.

Do you have any questions about Chernobyl or nuclear physics? Ask in the comments below!

–Lissie Connors
Lissie Connors (@LissieOfficial) does social media and writes about science for Physics Central. Uranium is one of her favorite elements.

What happens when several thousand distinguished physicists, researchers, and students descend on the nation’s gambling capital for a conference? The answer is “a bad week for the casino”—but you’d never guess why.
Lexie and Xavier, from Orlando, FL want to know:
“What’s going on in this video? Our science teacher claims that the pain comes from a small electrical shock, but we believe that this is due to the absorption of light. Please help us resolve this dispute!”
Even though it’s been a warm couple of months already, it’s officially summer. A delicious, science-filled way to beat the heat? Making homemade ice cream.

(We’ve since updated this article to include the science behind vegan ice cream. To learn more about ice cream science, check out The Science of Ice Cream, Redux)

Over at [email protected] there’s an easy recipe for homemade ice cream. But what kind of milk should you use to make ice cream? And do you really need to chill the ice cream base before making it? Why do ice cream recipes always call for salt on ice?