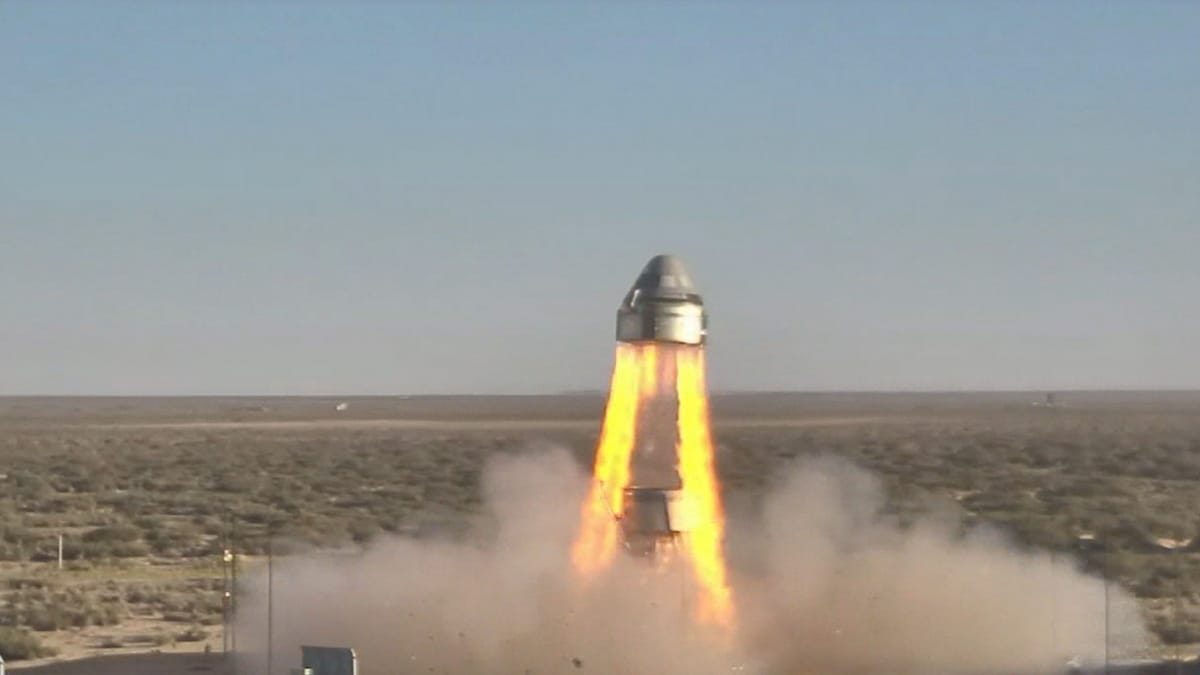 Boeing on Monday morning declared successful its test of the emergency abort system for the spacecraft it’s developing to fly astronauts to the International Space Station, even though only two of the three main parachutes deployed.

The test, at the White Sands Missile Range in New Mexico, was a long-anticipated milestone for a company that has been under fire for two fatal plane crashes that killed 346 people.

The test of the system was intended to demonstrate that the Starliner spacecraft could carry astronauts to safety in case something were to go wrong with the rocket.

Sitting on a test stand, the capsule fired its abort engines at 9:15am Eastern, sending the capsule hurtling through the air to more than 4,000 feet. The capsule was to hit 650 mph in five seconds. While one of its main parachutes appeared to malfunction, two deployed and the spacecraft landed safely in the desert about a little over a minute later.

Boeing officials said they have built in redundancy to the spacecraft, and having two of three parachutes deploy was good enough. “The test team and spacecraft performed flawlessly,” John Mulholland, Boeing’s Starliner program manager said in a statement. “Emergency scenario testing is very complex, and today our team validated that the spacecraft will keep our crew safe in the unlikely event of an abort.”

Boeing spokesman Todd Blecher said the company will review the data from the test “to determine how all of the systems performed, including the parachute deployment sequence.” He characterized the parachute problem as “a deployment anomaly, not a parachute failure.”

Chris Ferguson, a former NASA astronaut who now works at Boeing as its director of crew and mission systems, said the test went “pretty much the way I had envisioned.” Mike Fincke, a NASA astronaut slated to fly on the first mission with crews, said it shows Boeing is “committed to safety, and we are really looking forward to flying.”

The test came just days after Dennis Muilenburg, Boeing’s CEO, was grilled by members of Congress over the problems the company has had with its 737 Max airplanes, which resulted in two crashes, killing 346 people.

The scandal has engulfed the company and tarnished its reputation – one member of Congress during the hearings last week accused Boeing of building “flying coffins” – and so it needed the test Monday to go perfectly.

While not perfect, having two parachutes working is “acceptable” to meeting the test objectives, Boeing spokesperson Jessica Landa said during the broadcast. Initially, Boeing did not intend to live-stream the event, but NASA Administrator Jim Bridenstine insisted, writing on Twitter that he wanted “transparency for the taxpayer.”

Boeing and Elon Musk’s SpaceX are under contract from NASA to build spacecraft to ferry astronauts to the space station. The first flights were supposed to take place in 2017, but both companies have suffered problems and delays.

NASA has been unable to fly astronauts anywhere since the space shuttle was retired in 2011, and relies on Russia to launch its rockets to space. The delays have forced NASA to negotiate buying additional seats on Russian rockets at a cost of more than $80 million (roughly Rs. 565 crores) each.

Last year, Boeing, which is being paid $4.8 billion (roughly Rs. 34,000 crores) by NASA under what is known as the “commercial crew program,” suffered a major setback during a test of its abort engines when four of eight valves failed to close properly, allowing propellant to leak. The investigation and efforts to fix the problem resulted in a one-year delay, according to the Government Accountability Office. But the system had since been tested successfully, the company said.

The company hopes it will never have to use the abort system. But last year, a Russian Soyuz rocket carrying NASA astronaut Nick Hague and his Russian counterpart Alexey Ovchinin, suffered a failure when one of the side boosters did not separate properly and slammed into the rocket. That triggered the abort system, which gave Hague and Ovchinin a wild ride to the edge of space, but ultimately they landed safely.

Boeing’s next major milestone is a test flight of the Starliner spacecraft, without anyone on board, to the space station. In that test, the spacecraft would dock autonomously to the station while travelling 17,500 mph in orbit. The flight is scheduled for December 17.

NASA hopes that Boeing and SpaceX, which completed its test flight to the station without crews earlier this year, will be able to fly astronauts to space sometime next year.

Space Force backs development of commercial orbital debris removal systems
Facebook revamps its business tool lineup following threats to its ad targeting business
Bioscience Firm Colossal Says It Will Bring Back Woolly Mammoths, Other Species From Extinction Using CRISPR
Louisiana, Other Gulf States May Expect Up to 20 Inches of Rainfall Due to Tropical Depression Nicholas
What we can learn from edtech startups’ expansion efforts in Europe