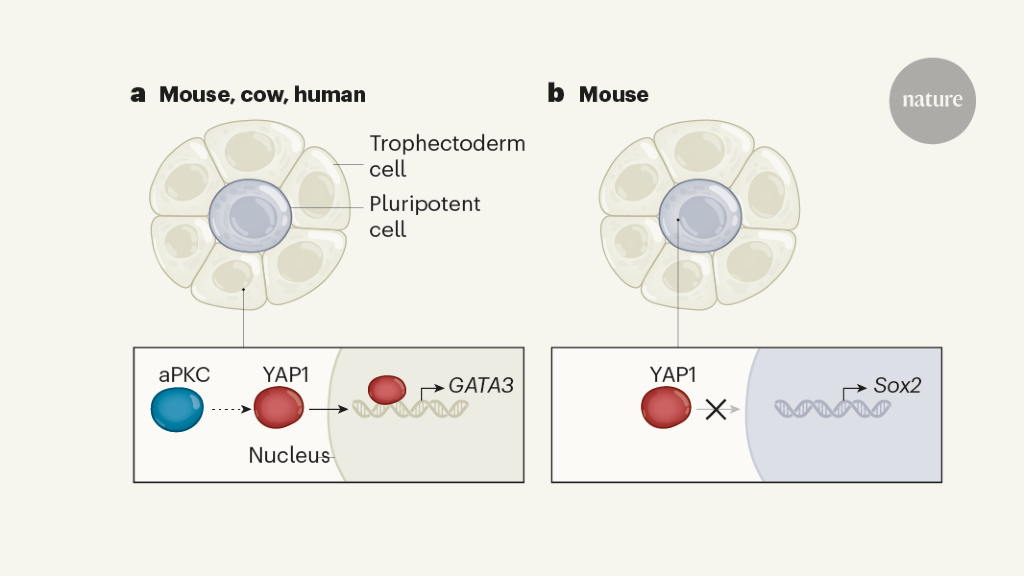 The placenta is a defining feature of being a mammal, and its formation is one of the first steps in mammalian development. The embryo begins to make its placenta without direct guidance from its mother — rather, it follows a set of molecularly encoded, do-it-yourself assembly instructions. Whether these instructions are universal or unique to each species of mammal is a long-standing mystery. Writing in Nature, Gerri et al.1 report a remarkable similarity in how mouse, cow and human embryos make their placentas. 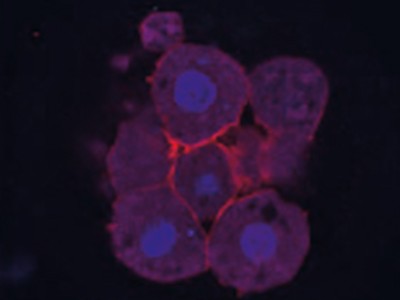 Historically, the mouse embryo has served as the model for elucidating the molecular mechanisms that guide cell-fate outcomes (decisions) during mammalian development. Now-classic studies established that the ball-shaped mouse embryo develops an external ‘rind’ of cells fated to become placenta about three days after fertilization. These cells, called the trophectoderm, encircle a group of inner cells that are considered pluripotent — they possess the capacity to produce all cell types of the body (reviewed in ref. 2).

Early mouse, cow and human embryos are structurally quite similar, raising the possibility that molecular mechanisms guiding the first cell-fate decision in development are evolutionarily conserved across mammalian species. But, curiously, the CDX2 protein, which is thought to be a master regulator of trophectoderm in mouse, does not seem to be present in cow or human embryos at the time of trophectoderm formation8,9, suggesting that other genes must regulate the first cell-fate decision in these species. However, the mechanism(s) for species other than mouse have not yet been described.

This is where Gerri and colleagues add a new page to the mammalian embryo instruction book. First, the authors analysed gene expression in human and cow embryos, and demonstrated that YAP1 localization and GATA3 gene expression are conserved between species as the trophectoderm emerges. Next, they disrupted cell polarization in each species by inhibiting atypical protein kinase C (aPKC), a key polarization protein. This prevented nuclear localization of YAP1, and disrupted GATA3 expression. These observations point to a conserved gene-regulatory module that governs the first cell-fate decision in mouse, cow and human embryos (Fig. 1a). 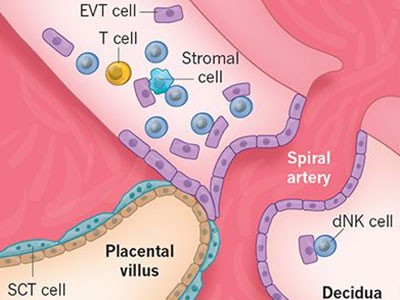 In spite of the striking conservation in how cell polarity and HIPPO signalling regulate GATA3 expression in mouse, cow and human embryos, Gerri and colleagues also report a notable difference. In mice, YAP1 inhibits expression of the pluripotency gene Sox2 in the trophectoderm, so restricting Sox2 expression to the embryo’s core7 (Fig. 1b). By contrast, in cow and human embryos, the SOX2 gene is initially expressed in both trophectoderm and pluripotent cells. Thus, YAP1 does not affect the initial patterning of SOX2 gene expression in cows or humans, as it does in mice8,10. Gerri et al. find that SOX2 expression does eventually become restricted to pluripotent cells in cow and human embryos, but it is not yet known whether this later process depends on YAP1. If so, the role of the signalling pathway would be conserved between species, although its timing would not.

Discoveries in mouse and human embryos contribute directly to our understanding of stem-cell biology. Cultured stem cells were first derived from both pluripotent and trophectoderm cells of the mouse embryo, paving the way for the establishment of stem-cell lines from human embryos2,11. Human stem cells have since been used in visionary efforts to study development and disease12. The knowledge gleaned from embryos thus guides our understanding of how to optimize protocols to manipulate the identity and function of stem cells, as well as bringing us closer to understanding the universal assembly instructions for mammalian embryogenesis.