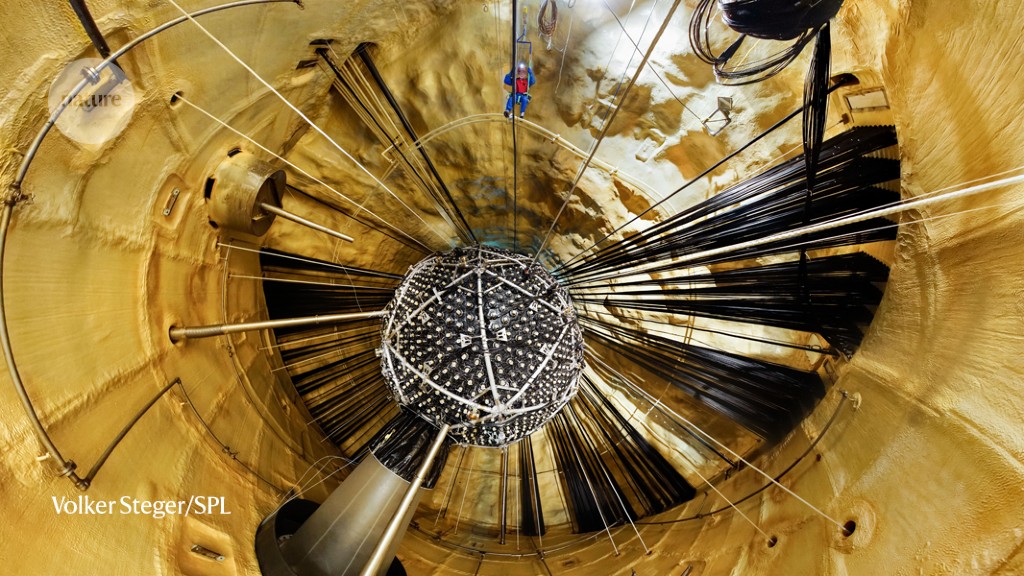 Italian physicist Ettore Majorana notoriously disappeared in 1938 without leaving a trace. His favourite elementary particles, neutrinos, might be capable of a similar vanishing act. Several new or upgraded experiments around the world are racing to show that an extremely rare kind of nuclear decay that normally produces two neutrinos might occasionally yield none.

These experiments have received less funding or attention than efforts to detect dark matter, but their impact across physics could be just as significant. The phenomenon of disappearing particles would suggest that neutrinos and antineutrinos, their antimatter counterparts, are one and the same — a possibility that Majorana first theorized1 in the 1930s.

Such ‘Majorana neutrinos’ could be the key to understanding why the Universe seems to contain very little antimatter (see ‘Questions that could be answered if neutrinos are Majorana particles’). Moreover, they would prove that unlike all other known particles of matter, such as electrons or quarks, neutrinos don’t get their mass from the Higgs boson.

Physicists have looked for the disappearance of neutrinos for decades, but the search is now ramping up dramatically, meaning that they “have a really good shot” at detecting it with the next generation of devices, says Michelle Dolinski, an experimental physicist at Drexel University in Philadelphia, Pennsylvania.

Experiments now online or being built in Japan, South Korea, Italy, Canada and the United States are an order of magnitude more sensitive than the previous generation, and planned future detectors would improve on that by another two orders of magnitude (see ‘Experiments around the world’). In 2015, an advisory committee to the US Department of Energy identified such a project as a priority and a commitment to fund an experiment to detect Majorana neutrinos — estimated to cost up to/around US$250 million — is thought to be imminent.

Neutrinos or antineutrinos are created whenever a proton in an unstable atomic nucleus decays into a neutron, or vice versa. This process, called β-decay, also shoots out either an electron or its antiparticle — collectively known as β-particles.

Nobel-prizewinning physicist Maria Goeppert-Mayer predicted2 in 1935 that certain atomic nuclei can decay by switching two of their neutrons into protons (or vice versa) at once, emitting two β-particles. This ‘double β-decay’ should also produce two neutrinos or antineutrinos. Goeppert-Mayer’s calculation was found to be correct, but this type of decay is extremely rare: one case3, the transmutation of tellurium-128 to xenon-128, has the longest known half-life of any nuclear reaction, at more than 1024 years, or one million billion billion years.

Four years after Goeppert-Mayer’s paper, physicist Wendell Furry pointed out4 that if Majorana was right and neutrinos were their own antiparticles, the two neutrinos emitted by a doubly decaying nucleus should occasionally annihilate each other, so the nucleus would emit electrons only.

Experiments testing the existence of Majorana neutrinos attempt to detect this neutrinoless double β-decay. In concept, this is disarmingly simple: take a chunk of material that might undergo the process and watch it for as long as you can, to see whether it emits two electrons carrying a specific amount of energy.

But neutrinoless radioactivity, if it exists, would be by far the slowest form of nuclear decay known: at least two orders of magnitude rarer than ordinary double β-decay. The best result so far — from the Germanium Detector Array (GERDA) at the underground Gran Sasso National Laboratories in central Italy — has found5 that one candidate for the process, germanium-76, must have a half-life of more than 1.8 × 1026 years. That’s around 10 quadrillion times the age of the Universe.

When experiments on rare radioactive decays increase their power or simply accumulate lots of data, one of two things usually happens: either they finally observe the reaction they were looking for, or they raise the threshold for how long its half-life has to be. The potential to set limits on the half-life therefore gives a measure of an experiment’s sensitivity.

Experiments that are now starting up or in the planning stages aim to be roughly 100 times more effective than GERDA — taking the half-life limit to 1028 years or more.

Experiments around the world

Many teams — using a variety of methods — are racing to find evidence of neutrinoless decay and prove the existence of Majorana particles.

One common strategy for increasing sensitivity is to lower the background noise, such as radioactive impurities in or around the detectors that could give false signals that look like electron pairs with the Majorana-neutrino signature. Some teams have gone to extraordinary lengths to eliminate these. “If you pick up a little bit of dirt, it may be one part per million of radioactivity; our materials are typically one part per trillion,” says Dolinski, who is a spokesperson for the Enriched Xenon Observatory (EXO-200), a recently concluded Majorana-neutrino experiment at the underground Waste Isolation Pilot Plant near Carlsbad, New Mexico.

Another experiment at Gran Sasso — the Cryogenic Underground Observatory for Rare Events (CUORE, Italian for ‘heart’) — keeps the core of its detector at a temperature of 0.01 kelvin to help it distinguish between various signals; it has been described as the ‘coldest cubic metre in the Universe’. CUORE also shields its tellurium target using 4 tonnes of ancient Roman lead that was recovered from a shipwreck and has particularly low radioactivity.

Of all existing experiments, GERDA has been most successful at reducing background noise: during its decade or so operating run, it saw essentially zero events that mimicked the Majorana-neutrino signature.

Crucially, the germanium detector is immersed in a tank of around 85-kelvin liquid argon, which has a triple role, says spokesperson Riccardo Brugnera, a physicist at the University of Padua in Italy. It keeps the germanium cold; it shields it from outside radiation; and it acts as a detector to weed out radiation signals that might still streak through to the core.

GERDA was dismantled last year, as its team joined forces with a US-led collaboration called MAJORANA to build a larger detector: LEGEND-200, which will have a target made of 200 kilograms of germanium-76. Now under construction at Gran Sasso, it is due to start taking data in November. Scaling up the size of the target increases the odds of seeing a decay. “You also need a large mass, otherwise you’ll have to wait for centuries,” says Brugnera.

Other experiments reached similar sensitivities to GERDA’s by banking on the sheer size of the target. At underground laboratories in Japan and Canada, physicists have repurposed massive detectors originally built to catch neutrinos. Japan’s KamlandZen800 has around 750 kg of xenon-136, while Canada’s SNO+ will have 1,300 kg of tellurium-130. Both experiments spot streaks of light produced by energetic particles as they cross a tank containing hundreds of tonnes of mineral oil.

In the run for funding

Yet another approach was pioneered by Dolinski’s EXO-200, which uses 200 kilograms of liquid xenon-136. The xenon acts both as the candidate isotope for neutrinoless decay and as the medium that reveals the electrons. Similar xenon-based detectors tuned to catch particles from space have conducted the most extensive searches for dark matter.

With a cost of less than $15 million, EXO-200 “was built under the radar, ignoring much bureaucracy”, says Giorgio Gratta, a physicist at Stanford University in California who helped to conceive it in the early 2000s. Gratta is hoping that the expected US Department of Energy funding will go to a much more ambitious version called nEXO, which will have 5 tonnes of xenon and could cost on the order of $250 million.

Among nEXO’s competitors for the windfall are the LEGEND-200 team, which has a proposal to scale up to a ‘LEGEND-1000’ experiment, with 1 tonne of germanium-76.

Physicists say it’s crucial to a have variety of large detectors in the race. The first hint of a neutrinoless decay will show up as a small bump in the data, and other experiments will need to repeat the findings. “The first thing that would need to happen is that you have to confirm it with a different isotope,” says CUORE spokesperson Carlo Bucci, a physicist at Gran Sasso.

Nevertheless, there is no guarantee that any of these experiments will show that neutrinos are Majorana particles any time soon. Leading theoretical models predict that they should, but the models are in part based on guesswork about the masses of neutrinos. Still, most physicists think that it’s a matter of when, not if. And then, at least one of the disappearing acts relating to Ettore Majorana will be solved.

Questions that could be answered if neutrinos are Majorana particles

If neutrinos are simultaneously matter and antimatter it could help to answer a number of major questions in fundamental physics.

1. Where did all the antimatter go? If neutrinos are Majorana particles, it could help to explain why the Universe contains overwhelmingly more matter than antimatter. The Big Bang should have created equal amounts of each. But matter must have had a slightly better chance of surviving reactions between subatomic particles in the hot primordial soup, leading to the current imbalance. The big question is why. Ordinary double β-decay produces two electrons and two antineutrinos, so it doesn’t change the balance of particles and antiparticles. But a neutrinoless double β-decay would produce only two electrons, yielding a net increase in the Universe’s number of particles.

2. Where do neutrinos get their mass — and how much do they have? In the standard model of particle physics formulated in the 1970s, quarks and electrons got their masses from the Higgs boson, and neutrinos had zero mass. Then, in the 1990s, physicists discovered that neutrinos do have mass — although exactly how much is unknown. If neutrinos are Majorana particles, they get their masses from a mechanism other than the Higgs. Moreover, measuring the frequency of neutrinoless decay would indirectly measure antineutrino (and therefore neutrino) masses, because the more massive the particles are, the more likely they are to annihilate each other.

3. Why do neutrinos always spin the same way? Unlike particles such as the electron, neutrinos always spin in one direction: their axis is always observed to align with their direction of motion, and their spinning is always ‘left handed’, or anticlockwise. Antineutrinos have only been observed in a right-handed spin. When physicists formulated the standard model, they embedded this asymmetry. But if neutrinos are Majorana particles, that means antineutrinos could simply be neutrinos spinning in the opposite direction.

An exceptional view of phase transitions in non-equilibrium systems