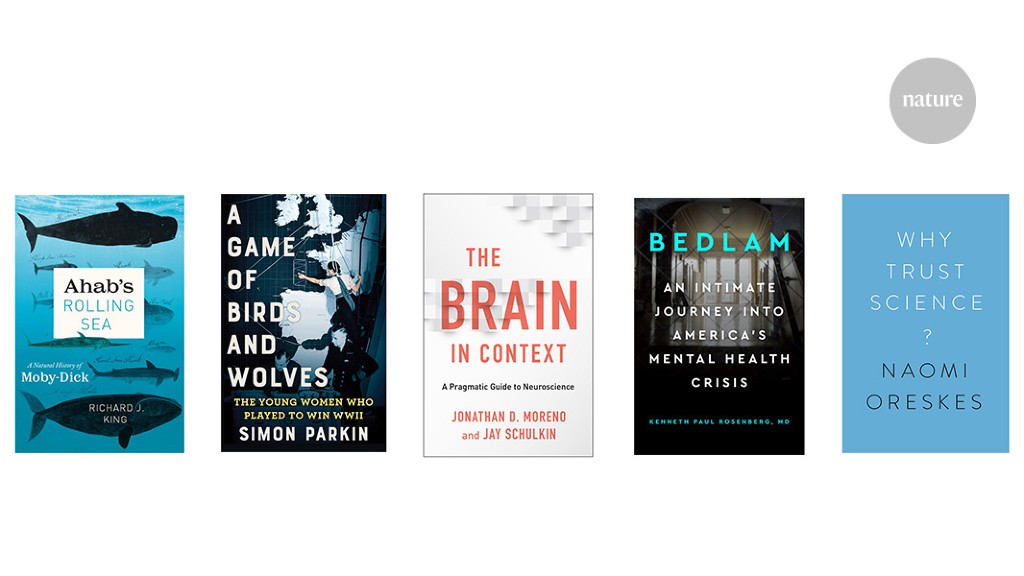 Herman Melville’s sprawling masterpiece Moby-Dick (1851) is a fictional feat studded with empirical evidence, reveals maritime historian Richard King in this invigorating study. King traces references to ethology, meteorology, marine microbiota and the oceans to Melville’s sailing experience in the Pacific and wranglings with the works of scientists William Scoresby, Louis Agassiz and others. Moby-Dick, King boldly avers, is a “proto-Darwinian fable” — and its beleaguered narrator, Ishmael, an early environmentalist.

A Game of Birds and Wolves

Did gaming win the Second World War? In this stirring history, Simon Parkin recounts how eight mathematically minded members of the UK Women’s Royal Naval Service, with retired captain Gilbert Roberts, aimed to crack the tactics of Germany’s notorious U-boats through war games. Playing large-scale Battleship on the floor of a Liverpool office, the team’s ‘Operation Raspberry’ was decisive in winning the Battle of the Atlantic. Parkin’s account redresses a balance: none in this doughty sisterhood has ever been publicly honoured.

As some sectors of society reject expertise on issues such as vaccination, science historian Naomi Oreskes explores what makes science trustworthy. This concise volume — comprising her 2016 Tanner Lectures on Human Values at Princeton University in New Jersey, along with commentary by experts — is a bracing exploration of philosophy of science and a demonstration of her vigorous engagement with the topic. We trust science, she reminds us, because consensus is a crucial indicator of truth — and “objectivity is maximised” through diversity.

Psychiatrist Kenneth Rosenberg has been at the front lines of mental illness since the 1980s, when US psychiatric-hospital closures forced many people with serious mental conditions onto the streets or into prisons: some jails now ‘warehouse’ thousands. He meshes research with an analysis of systemic failures and personal stories, including those of psychiatrist Elyn Saks and his own sister, both diagnosed with schizophrenia. His ultimately hopeful study highlights key steps for patients, from details on integrated care to US legal advice.

The Brain in Context

That fatty mass in the skull is not all there is to the brain — neural tissue lurks all over the body. So bioethicist Jonathan Moreno and neuroscientist Jay Schulkin begin their guide to neurology. To “see the brain in its wholeness”, they examine the historical interplay of experiment and theory through lenses from comparative structure to evolution and imaging. The result is fascinating, whether on ‘brains in a dish’ or BrainGate technology to help people with paralysis control their limbs; but factual logjams impede the flow at times.