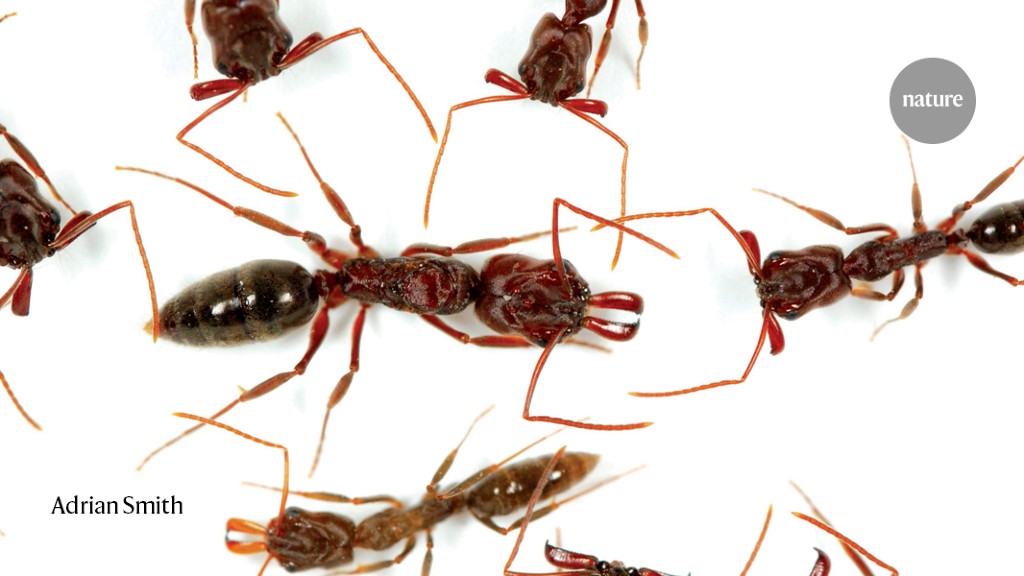 Nine months ago, in my research laboratory at the North Carolina Museum of Natural Science, in Raleigh, I filmed myself being bitten by an ant. It wasn’t a bite from an ordinary, everyday ant. It was my main study organism, a trap-jaw ant of the genus Odontomachus, with jaws that snap shut faster than almost any other recorded animal movement. It’s so fast that visualizing it requires filming at a minimum of 60,000 frames per second. When I show high-speed videos of these ants, and talk about them, inevitably I’m met with the question: “Would it hurt if they snapped against you?” That’s a question that was answered almost immediately for me when I started working with them eight years ago: no. They’d snap their tiny jaws at my hands and bounce off, nearly unnoticed, while I scavenged through excavated nest soil in the field or cleaned their nest boxes in the lab.

But that question inspired me to expand my approach to communicating science. Until then, I had focused on imparting the ends of my scientific pursuits — the research results — but had overlooked opportunities to get across the fundamental, and often more exciting, aspects of my research: the initial experiences and observations. I realized that I had more research stories to tell, beyond just the final results. So, I switched on my high-speed camera and stuck my finger in front of a trap-jaw ant.

The four-and-a-half-minute video shows, in super-slow motion and in close-up, macro detail, a trap-jaw ant snapping against the tip of my finger. The force of the strike deflects off my unharmed finger back to the ant, sending her flying off the platform she was standing on. It’s a shot that no one had filmed before, to my knowledge, contextualizing the snap of these ants on a human scale.

The remainder of the video is me in the lab adding a “how” and “why” narrative to the footage. It’s not a video presenting a scientific result: it’s a video about what it’s like to experience and observe these ants as a researcher. I uploaded it to my lab’s YouTube channel and, to my surprise, a production company making a show for the US television channel Animal Planet saw it and asked to license the story. The full video will be shown on the channel’s How Do Animals Do That? programme. The licensing fee that came to my lab funded a summer resident assistant’s stipend for a graduate student.

Before all this happened, I assumed that the value of a researcher’s science-communication output depended on published research findings — not on personal experiences. Its value was not monetary; rather, it was assessed by the impact of its results, the level of press exposure, or the extent to which it generated excitement and appreciation for science. Most of my output had been videos summarizing articles that I and a few colleagues had published in scientific journals. I’d attach these to an institutional press release — and if mass-media outlets picked up the release and associated media, I’d have an opportunity to communicate my work to a broad audience.

Tip of the iceberg

These products worked, and I did find a lot of value in communicating research in this way (I wrote a column about this process last year). But it was a struggle to release more than two or three videos a year, because they were dependent on research projects progressing through peer review and on to publication. I was communicating the peer-reviewed tip of a scientific iceberg. The rest of my work, some of the most interesting parts, remained untold and hidden from view.

At its core, my job as a research scientist is to try to see and interpret the world in a way that has not been attempted before. As a behavioural ecologist, I begin most of my research projects by trying to make and document an original observation about the life of an organism. But many of my observations end up never being documented in my peer-reviewed manuscripts. They might, for example, raise questions well beyond my area of expertise; or it could be (especially with observations that I was lucky to make) that trying to replicate them in a scientific study is just too time-consuming or costly. But I am starting to realize that none of those reasons prevents me from turning those observations into interesting stories that can drive public interest in science, and that have value beyond the rather narrow world of academic behavioural ecology.

Take my recent research experience with ant stingers. We know little about the mechanics of an ant sting. For instance, no one has ever filmed how venom is delivered out of the stinger. So, I spent a week perfecting camera techniques to gather slow-motion video of these microscopic bits of ant anatomy in action. What I recorded were the first detailed videos of venom being pumped from the stinger. From this footage, I could assess what was and wasn’t measurable, and what expertise I’d need from a collaborator to move this project forwards. Beyond that, however, this bit of observational science was a fascinating story that I had to share.

I put together, edited and uploaded a three-and-a-half-minute video showing the footage and explaining why I thought it was original and interesting. When it debuted, I also published a short Twitter thread summarizing the video and providing some excerpts. The thread went viral, trending on the site’s news feed and gathering more than two million impressions on the platform. That week, I spoke about the footage on two local news broadcasts; and several mass-media news outlets, including Science, published articles embedding video of the stinger footage that I had just captured. On YouTube, the footage garnered more than 250,000 views, and messages appeared in my inbox from people who had seen the footage and wanted to work with me.

I’m not sure if these initial ant-stinger observations will eventually produce a peer-reviewed, published piece of science. I hope they do, but it wouldn’t be unusual if this project failed to progress to that stage. What I do know is that expanding my science-communication efforts to pass on more than just the end products of my scholarly work has added a lot of value to what I produce as a scientist.