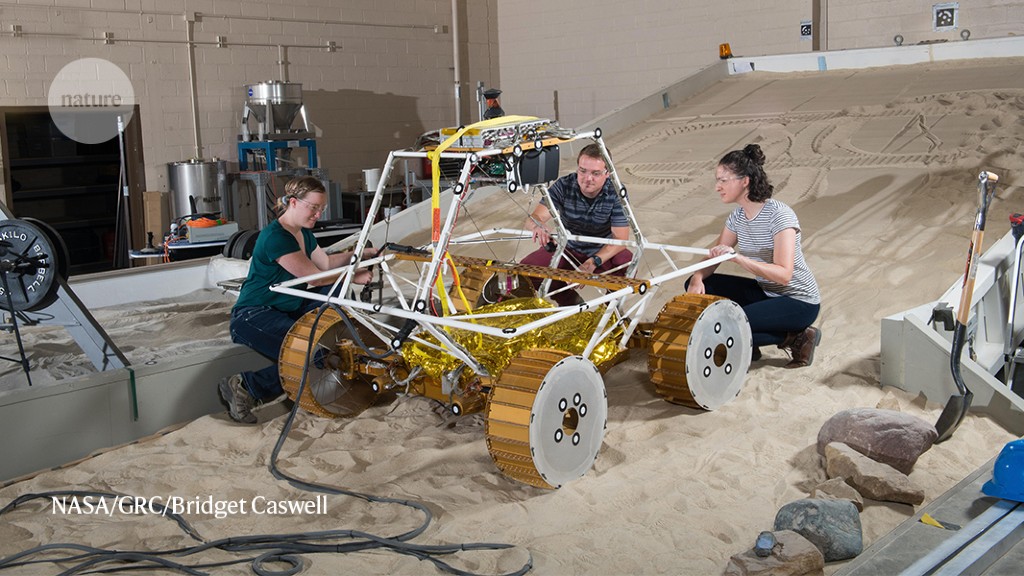 Will NASA’s Moon rover find enough of the ice it seeks?

NASA plans to land its next lunar rover beside a crater, named Nobile, near the Moon’s south pole. But some scientists question whether the mission, set to launch in 2023, will efficiently find the lunar ice that it’s looking for.

The mission, known as the Volatiles Investigating Polar Exploration Rover (VIPER), will be the first to visit the Moon’s south pole, which holds great scientific promise: it receives little sunlight, so it has reserves of ice containing information about the origin and evolution of the Solar System.

The agency acknowledges that VIPER (pictured, a test version on Earth) does not yet have a detailed map of where the ice is around Nobile. “This is exactly why we’re going,” says Anthony Colaprete, VIPER’s project scientist at NASA’s Ames Research Center in Moffett Field, California.

But some scientists say VIPER would be better off if NASA first launched a different planned spacecraft: a small, US$55-million satellite called Lunar Trailblazer. Lunar Trailblazer’s mission is to map water on the Moon. Researchers say the VIPER team could use these maps to help the rover to prospect efficiently for ice during its fast-paced, 100-day mission. It’s an “opportunity missed”, says Clive Neal, a geoscientist at the University of Notre Dame in Indiana.

Research on economic issues relating to developing countries is led predominantly by people based in the global north, according to an analysis of nearly 25,000 papers. The findings show that although many studies focus on countries or regions in the global south, researchers based there have been vastly under-represented in the literature for decades.

“Once you begin to quantify it in a systematic way, the gravity of the problem really just comes home,” says co-author Grieve Chelwa, an economist now at the New School in New York City.

In a subset of 15,117 articles explicitly focused on a country or region in the global south, the team found that 62% were authored by researchers based in the global north. ‘Southern’ researchers were also under-represented in article citations and among presenters at international development conferences (V. Amarante et al. Appl. Econ. Lett. https://doi.org/gxgq; 2021).

The authors defined ‘southern’ researchers as those working at a university or organization based in any country of Latin America, Asia or Africa, including the Middle East, whereas ‘northern’ researchers were defined as those based anywhere else.

Limited access to research funding and opportunities in some countries, and migration of researchers from the global south to the global north, might partially explain the dominance of the north in development studies, says Chelwa. But he and other development researchers suspect that exclusion and exploitation of global-south-based researchers could also contribute.

Chelwa adds that, in future, he would like to see more “equal partnerships” between researchers in the global north and south, and increased representation of academics from the global south on journal editorial boards.

The United Kingdom has a new science minister — its ninth since 2010, following a reshuffle of Prime Minister Boris Johnson’s cabinet. George Freeman, a former investor in life-sciences companies, takes the role as the coronavirus pandemic puts renewed focus on research.

Freeman has been a Conservative Member of Parliament since 2010, and has previously served as a government life-sciences adviser and as transport minister. He takes over his latest role — a junior ministerial job — from Amanda Solloway, who was appointed in early 2020.

His background, as a minister and a biotechnology venture capitalist, makes Freeman a relatively popular choice for some researchers.

The reshuffle comes less than two months before the government’s spending review, in the run-up to which ministers must vie for funding for their departments. Scientists will be watching closely to see how Freeman plans to achieve the United Kingdom’s bold target of increasing public and private research and development investment to 2.4% of gross domestic product by 2027.

The country’s relationship with Europe is also likely to influence the science minister’s agenda.

The global research community must not abandon Afghanistan

Lenghu on the Tibetan Plateau as an astronomical observing site