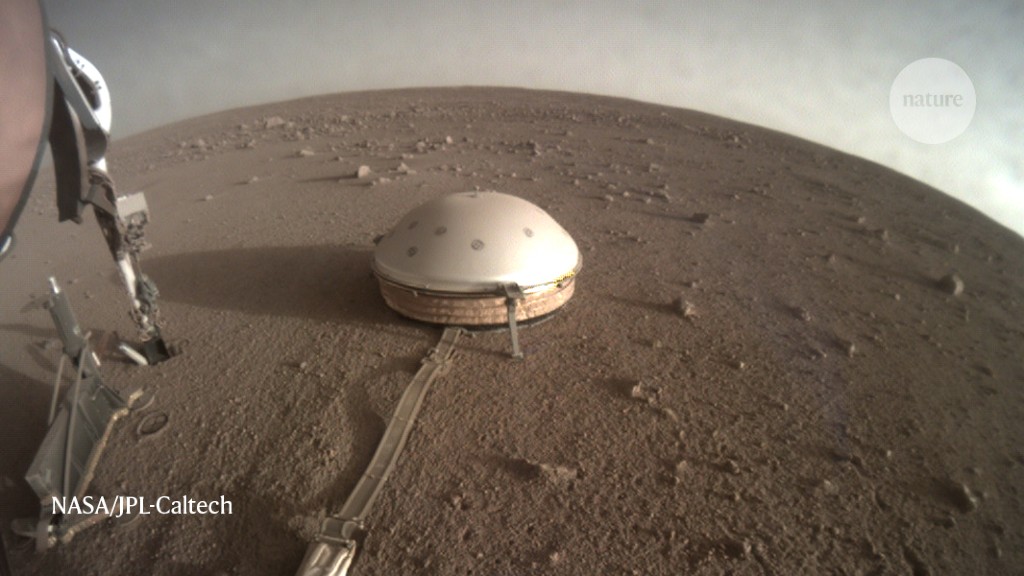 The marsquakes are coming fast and furious. From its landing site near the Martian equator, NASA’s InSight mission is detecting about two quakes per day — and the rate is going up.

“We have a lot,” said Bruce Banerdt, a geophysicist at the Jet Propulsion Laboratory in Pasadena, California, and InSight’s principal investigator. He reported the findings on 12 December at a meeting of the American Geophysical Union in San Francisco.

Since arriving on Mars just over a year ago, InSight has detected 322 marsquakes. They are the first quakes ever detected on Mars, and the first on any body other than Earth and the Moon. Scientists aim to use them to probe the Martian interior, including deciphering the planet’s guts into layers of crust, mantle, and core.

Most of the marsquakes are tiny, far smaller than anything that would be felt on Earth. But a couple have been big enough — up to nearly magnitude 4 — for scientists to be able to trace them back to their source.

Two of the biggest marsquakes came from a geologically active area known as Cerberus Fossae, which lies about 1,600 kilometres east of InSight. The quakes there may have been caused by the buildup of stress along geological faults within the Martian crust, and then released in a marsquake.

Other early findings from the mission include mysterious magnetic pulses that appear around midnight each night beneath the lander. But one of InSight’s main goals — to hammer a heat probe 5 metres into the Martian ground — remains frustratingly out of reach. The probe, dubbed ‘the mole’, encountered more friction in the soil than scientists had expected. In October it even unexpectedly backed out of its hole.

The biggest discoveries so far have come from the ever-expanding catalog of marsquakes. InSight’s highly sensitive seismometer measures hunts for quakes at night, after the winds that shake the ground during the day die down.

The marsquakes come in two types. The most common shakes the ground at high frequencies. Less common is a type of quake that is detectable at lower frequencies. The high-frequency ones may be coming from quakes that rupture the shallow Martian crust, whereas the low-frequency ones may be traveling from deeper within the planet, in its mantle, said Domenico Giardini, a seismologist at ETH Zurich in Switzerland.

Two of the biggest marsquakes hit in May and in July. Both were the low-frequency type. Team members were able to trace the seismic energy back to where it came from, in Cerberus Fossae. This area is home to recent geologic activity, including faults that appear to have moved in the past 10 million years.

Before InSight launched, researchers had predicted it might be able to detect quakes coming from Cerberus Fossae. The faults there could build up stress at their ends, said Alice Jacob, a planetary scientist at the Institut de Physique du Globe in Paris. An analysis she led suggests that this could be the source of the marsquakes picked up by InSight.

The rate of quakes has been increasing over time, Banerdt said — from a few sporadically reported after landing to the current pace of two a day. Mission scientists aren’t sure why.

Equally mysterious are the magnetic pulsations that show up every night. InSight measured them with its magnetometer, and they may be related to something happening in the space environment around Mars. One idea is that they are created when charged particles from the solar wind slam into Mars’ magnetic field.

InSight’s greatest drama to date has come with its mole. It initially began burrowing into the ground as planned but hit disaster in October, when it suddenly squirted out of its hole.

Mission engineers designed the mole to work in a different type of soil than what it encountered. It was designed for cohesionless soil, in which particles flow with little to no friction between them—as in a vat of sugar. But InSight’s landing place turned out to have cohesive soil, in which the particles stick together more like in a vat of flour, says Tilman Spohn, a space scientist at the German Aerospace Center in Cologne, Germany.

When the mole began burrowing, the soil around it became compacted into a pit. The mole could not gain enough friction against the pit’s walls to keep moving into the ground. Spohn says that he and his colleagues had seen this happen in laboratory experiments involving cohesive soils, but that they expected InSight’s landing place to have cohesionless soils because that’s what other Martian landing sites have been like.

InSight seems to have been unlucky enough to land in a place where the soil is compacted into a harder material called a duricrust, says Matthew Golombek, a planetary scientist at the Jet Propulsion Laboratory. The duricrust is both harder and possibly thicker than expected.

Mission engineers have been trying to get past the problem by pinning the mole to the side of the pit with the lander’s arm to give it more friction to keep going. And it is starting to bury itself into the ground again, slowly and carefully.

“By Christmastime, maybe our present will be that we’re back to square one,” says Spohn. “Which at this point in time would be a very, very welcome situation.”