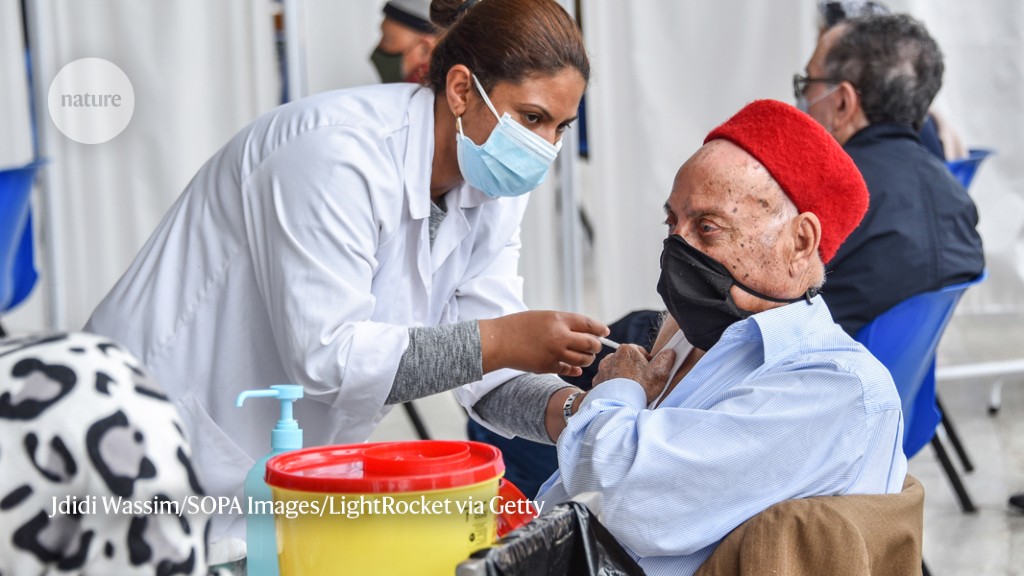 The China National Space Administration (CNSA) has revealed the first images from Mars taken by its Zhurong rover, which arrived on the planet’s surface this month. Scientists say that the shots — which show its solar panels unfurled and the ramp from its lander deployed — hint that it arrived at an ideal site from which it can explore.

“The first images show, first and foremost, a terrain that will be easy to drive over,” says Alfred McEwen, a planetary scientist at the University of Arizona in Tucson. He and other space scientists are thrilled to see that the site appears to be flat and largely free of obstructions, such as craters, rocks and boulders. From there, the craft will potentially travel long distances to features of interest seen in satellite imagery.

“We are very excited. But we are still waiting for more images with high resolution to come,” says Yuyan Zhao, a planetary geochemist at the Institute of Geochemistry, Chinese Academy of Sciences, in Guiyang.

A black-and-white image, taken from a forward-facing obstacle-avoidance camera with a wide-angle lens, shows a ramp descending from the landing platform, which Zhurong has now rolled off. A second image, in colour, showing the view from a navigation camera pointing towards the rear of the rover, reveals a deployed antenna and solar panels in the shape of butterfly wings.

The photographs are “clearly world-class quality and very exciting scientifically”, says Joseph Michalski, a planetary scientist at the University of Hong Kong. Researchers “will need a little time to dig into the details”, he adds. “But the images are enticing and encouraging.”

The flat landscape that can be seen is especially promising, scientists say, because it means Zhurong could reach features of geological interest that are several kilometres away. One land form of particular interest is a cone-shaped feature seen in aerial images, possibly a mud volcano, to the northeast.

Zhurong’s mission is expected to last three months, but the rover could survive for longer and tally up a considerable distance, as other solar-powered rovers have.

Scientists zero in on marker of COVID-vaccine efficacy

After people have been vaccinated against COVID‑19, the levels of infection-blocking, or ‘neutralizing’, antibodies in their blood are a strong indicator of how much protection they’ve gained against the disease, according to a modelling study (D. S. Khoury et al. Nature Med. https://doi.org/gj3h47; 2021).

The research is the best attempt yet to define features of the immune response that can act as a proxy for protection against COVID-19, known as a correlate of protection, says Daniel Altmann, an immunologist at Imperial College London (pictured, SARS-CoV-2 particles infecting a cell).

If researchers have a well-defined correlate of protection, they can predict from early trial data how effective a vaccine will be, says James Triccas, a medical microbiologist at the University of Sydney in Australia and a co-author of the study. This “alleviates the need to do larger, more expensive and time-consuming phase III trials”.

Triccas and his colleagues examined antibody data from trials of seven widely used vaccines. The team found a strong link between neutralizing-antibody levels recorded in participants in early-stage trials and vaccine-efficacy results from late-stage trials.

At the end of 2020, the United Kingdom faced a limited supply of COVID-19 vaccines, so it delayed second doses to maximize the number of people who would be at least partially protected from hospitalization and death.

Now, a study suggests that delaying the second dose of the Pfizer–BioNTech mRNA vaccine could boost antibody responses after the second inoculation more than threefold in those older than 80 (H. Parry et al. Preprint at medRxiv https://doi.org/gdhc; 2021).

Published as a preprint, it is the first direct study of how such a delay affects coronavirus antibody levels, and could inform vaccine scheduling decisions in other countries, the authors say.

Gayatri Amirthalingam, an epidemiologist at Public Health England in London, and her colleagues studied 175 vaccine recipients older than 80 who received their second dose of the Pfizer vaccine either 3 weeks or 11–12 weeks after the first dose. Peak antibody levels were 3.5 times higher in those who waited 12 weeks for their booster shot than in people who waited only 3 weeks.

“This study further supports a growing body of evidence that the approach taken in the UK for delaying that second dose has really paid off,” says Amirthalingam.