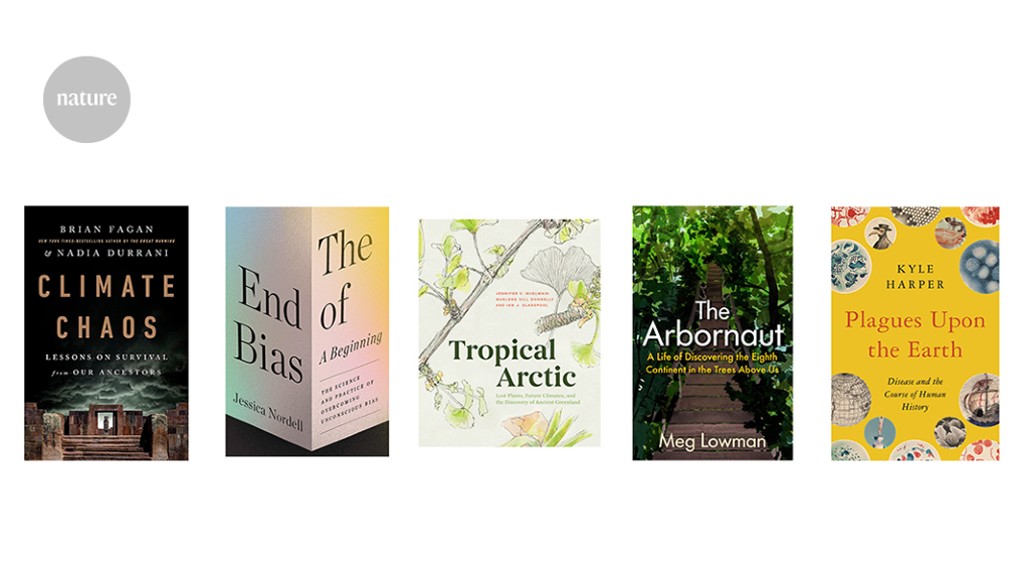 Earlier civilizations’ responses to natural climate shifts are often assumed to be irrelevant to the current crisis. Not so, argue archaeologists Brian Fagan and Nadia Durrani in their rich survey of the past 30,000 years. A global drought from 2200 to 1900 bc first destabilized Egypt, then strengthened it, after pharaohs in supposed divine control of the Nile were replaced by provincial leaders who invested in dams and irrigation. Egypt’s “organized oasis” flourished for two millennia, becoming ancient Rome’s granary.

Ice-covered Greenland was named misleadingly by tenth-century Norse settlers hoping to attract others. But at the time of the dinosaurs, the label would have been accurate, judging from the fossilized plants intricately reconstructed and pictured in this fascinating study by palaeobotanists Jennifer McElwain and Ian Glasspool, with scientific illustrator Marlene Donnelly. They warn that current greenhouse-gas emissions are becoming comparable in impact to the volcanic emissions that triggered the collapse of Triassic Greenland’s flora.

Plagues upon the Earth

Classicist Kyle Harper’s absorbing global history of disease from prehistoric times to today emerged from a study of ancient Roman plagues. Their details left him asking why the empire suffered giant epidemics; why these particular diseases; and why then? He explores how human history has shaped disease ecology and the evolution of pathogens, and vice versa — both predictably and unpredictably. The COVID-19 pandemic is part of this “deep pattern”, he concludes: “expect the unexpected”.

The End of Bias

When she was trying to break into journalism, Jessica Nordell had no response from editors — until she used a man’s name on her pitches. Her first book (shortlisted for the 2021 Royal Society Science Book Prize) skilfully and sensitively explores ways to eradicate bias in society and oneself. Interviewing cognitive scientists and social psychologists, mostly in the United States, she covers a huge range of methods, such as doctors’ diagnostic check lists for gender equality, and a police unit practising mindfulness to diminish its use of force.

Of the roughly 400,000 species of flowering plants, how many are weeds? The answer depends on who, where and when you ask. “One person’s weed is another’s wildflower, food or medicine,” notes plant ecologist John Cardina; think of cannabis. His penetrating analysis disentangles botany from history by offering eight interwoven stories, each focused on one weed, some familiar, others less so: dandelion, Florida beggarweed, velvetleaf, nutsedge, marestail, pigweed, ragweed and foxtail.

The author declares no competing interests.

Why I swapped the piano for pipettes

How pirouettes and pliés prepared me for a research career

Collaborations with artists go beyond communicating the science

Why I swapped the piano for pipettes

The lesson of talk over tea and cakes? Local research matters