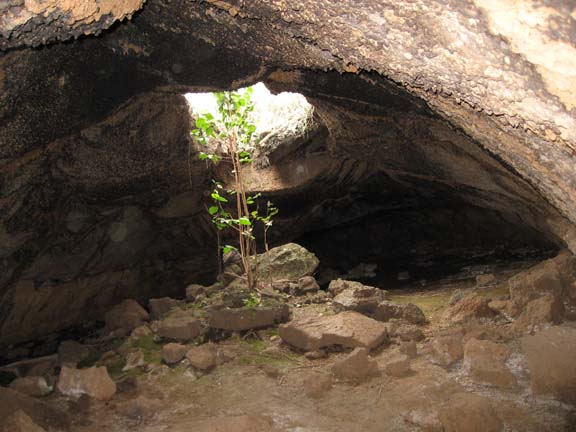 For over ten millennia, the people of the arid landscape of what is now western New Mexico have been famous for having unique architecture, complex societies, and political and economic systems.

In the El Malpais, known as the badlands, a geosciences research team of international scientists led by researchers from the University of South Florida (USF) made an interesting discovery. The team explored El Malpais National Monument‘s ice-laden lava tube and other scientists from a Romanian research institute, the National Park Service, and the University of Minnesota.

They published their discovery and analysis in the journal Scientific Reports.

Surviving the arid badlands with ice

According to Bogdan Onac, a USF professor of geosciences, the Ancestral Puebloans survived the many devastating droughts in the area by melting the ice in the deep caves that needed water.

The practice dates back to 150 AD up to 950 AD, when these water gatherers used small fires to melt these ice and collect them for drinking and possibly religious practices. The research team found charred materials inside the cave, which indicated the use of these fires.

The scientists believe the droughts influenced the Ancestral Puebloans in their strategies in subsistence, settlement, agriculture, demography, and migration.

According to the research team, their discovery showed how five drought events impacted the societies in those times and how they coped.

The research team studied one lava tube on a lava flow swatch stretching forty miles. A lot of these lava tubes have considerable ice deposits. According to the scientists, their study first showed human harvesting of water in these tubes in this region.

There were five periods of drought stretching for 800 years when the Ancestral Puebloans used the cave.

When there was no drought, seasonal ice melted near the entrances and formed temporary accessible shallow water pools. As the ice disappeared or retreated during dry and warm periods, Ancestral Puebloans regularly went to the cave’s rear to melt its ice block with small fires.

Ash and charcoal deposits were found on the site. There were also pottery, particularly Cibola Gray Ware. The researchers think the Ancestral Puebloans managed the smoke in the cave by taking advantage of the natural circulation of air in the enclosure and only maintaining small fires.

The original study did not intend to focus on the surprising discovery. According to Onac, their original purpose was to reconstruct the cave’s paleoclimate with the steadily and slowly melting ice deposits.

He added that this particular lava tube was special due to the large amounts of charcoal floor deposits on the cave’s deeper portions. They eventually thought of connecting the soot and charcoal they found with the Ancient Puebloans’ use of the ice.

Onac adds that the melting ice in the cave due to the current climate crisis threatens the fragile archaeological and paleoenvironmental evidence they discovered.

The melting in the lava tube and other similar sites in New Mexico previously used by the Ancestral Puebloans due to climate change will erase the ancient data.