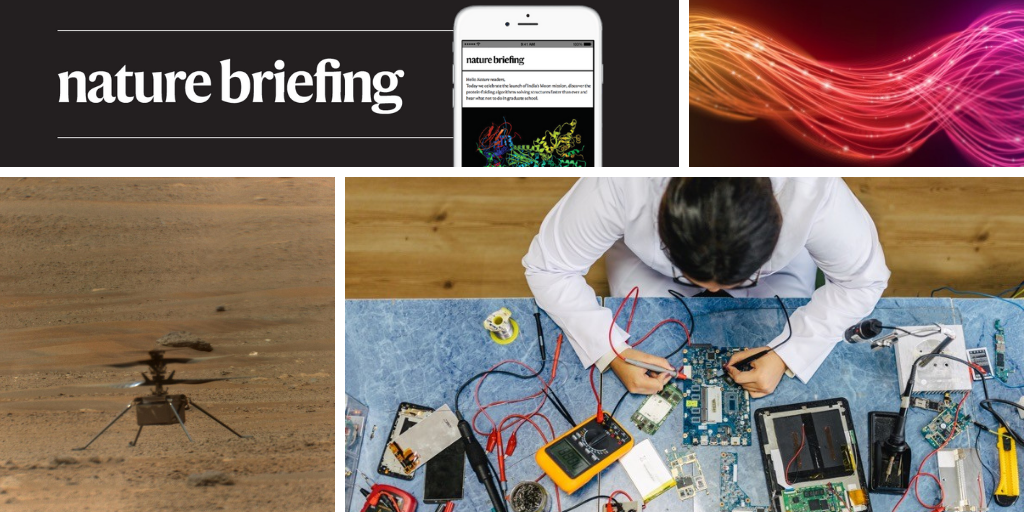 Why dust chases the Mars helicopter

When whizzing through the Martian air, NASA’s pint-sized Mars helicopter sometimes stirs up a dust cloud that envelops and travels along with the tiny chopper. The unexpected phenomenon has scientists salivating over what it will teach us about the dynamics of Mars’s thin atmosphere, where tornado-like dust devils often form when the Sun heats the air and afternoon winds begin to blow. Ingenuity’s only goal is to show that flight on Mars is possible. So “anything we can learn from it scientifically is icing on the cake”, says physicist Brian Jackson.

The CureVac vaccine has proved to be only 47% effective in preventing COVID-19 in late-stage trials. CureVac, a German biotechnology company, pointed to the challenges of protecting against an “unprecedented broad diversity of variants” — 13 variants were detected among the people involved in the study, and only one person was infected with the original strain. The interim results have not yet been peer reviewed.

Three astronauts have moved into China’s space station, following the launch of the country’s first crewed spaceflight in nearly five years. They will be the first humans to visit the station. The crew will bring the station’s core module, Tianhe, into service. “We need to set up our new home in space,” said mission commander Nie Haisheng.

What tinkering taught me

Chemical engineer James Crawford regularly uses a variety of analytical equipment and reactor systems in his laboratory — and when something breaks, it’s often up to him to fix it. He explains how tinkering with tools has helped him more than he had expected.

Webcast: How to learn to code

Time to take the plunge into learning to code? An introductory webcast from Nature Careers will get you started. Nature technology editor Jeffrey Perkel and others share tips, advice and resources for learning computer programming for research in this recorded live webcast from 4 June.

Register for the next live webcast or watch past ones at nature.com/webcasts.

Why humans are so thirsty

Quirks of our evolution might explain why humans need to drink more water than most mammals. While our ancestors were evolving in Africa two to three million years ago, the climate became more arid. Their bodies became taller and slimmer, with a greater surface area. Combined with a reduction of body hair and increase in sweat glands, this made them better at dissipating heat. But it also increased the amount of water that our ancestors needed. “Throughout history people have drastically engineered their environments to ensure access to water” as a result, writes human biologist Asher Rosinger.

“The future lies in standing on the shoulders of crowds.”

Forget ‘standing on the shoulders of giants’ — today’s science is all about collaboration, argues a Nature editorial.

Feeling a bit worn down? Watch a satellite be satisfyingly immolated in a plasma wind tunnel (on purpose) to make sure it will fully burn up on reentry.

Help ensure that this newsletter lands in your inbox in peak condition. Please send your feedback, whether positive or critical, to briefing@nature.com.

With contributions by John Pickrell