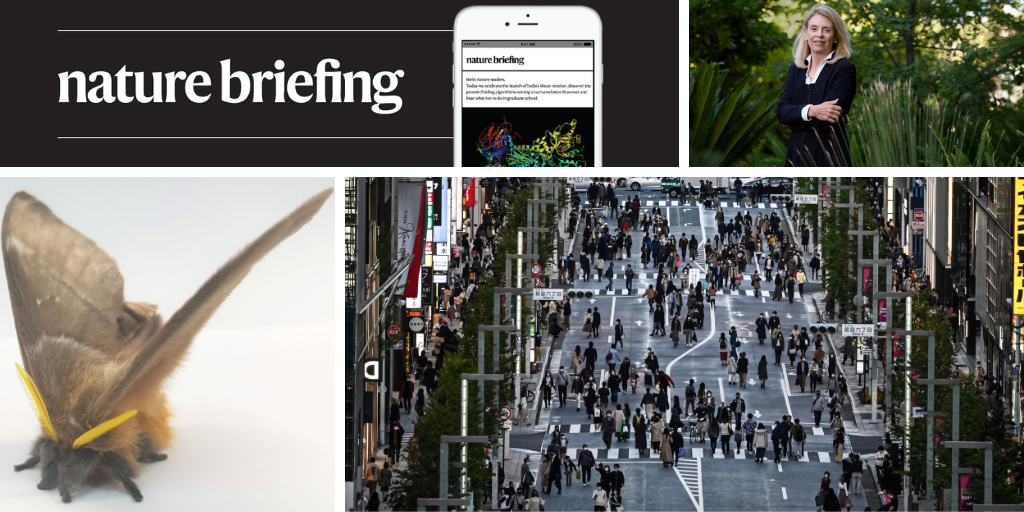 Scales on the wings of moths form acoustic camouflage that hides the insects from the sonar of bats. Researchers examined the Chinese tusar moth (Antheraea pernyi) and Dactyloceras lucina, a large African moth. These species have no ears to hear approaching predators. Instead, they defend themselves using a dense array of tiny, thin scales that each resonate at a particular frequency. Together, the scales absorb at least three octaves of sound — the first known natural acoustic metamaterial. The intricate arrangement and structure of the scales could inspire ultrathin sound-absorbing materials: think sound-absorbing wallpaper instead of panels, say researchers.

“Between 1997 and 2001, ten prescription drugs were withdrawn from the US market, and eight of those were more dangerous for women than for men,” notes gender and science researcher Londa Schiebinger. Today, the European Commission published its second report on Gendered Innovations, produced by a 25-person expert group that Schiebinger chaired. The report provides guidance for how researchers can incorporate sex and gender analyses across the gamut of research topics funded by its Horizon Europe programme. “This kind of analysis is not about women — it’s about getting the research right, and it benefits everyone,” says Schiebinger.

Next week, the European Space Agency star-mapping satellite Gaia will update its map of the Universe, built from 1.6 million quasars and more than 1 billion stars. The Gaia data offer a fixed reference frame against which astronomers can fine-tune their observations to account for the position of Earth and all its celestial neighbours. The Gaia reference frame has already helped the New Horizons probe to snag images of a Kuiper Belt object, Arrokoth, while both were almost 7 billion kilometres away.

Japan has been unique among densely populated countries in having relatively few COVID-19 cases without severe lockdowns or widespread testing. Many credit its ‘cluster busting’ strategy, which focuses on tracking the source of clusters but otherwise doing little general testing. But as infections spread more widely and Japan’s third wave looks set to dwarf the first two, the ‘Japan model’ might have reached its limits. “The current epidemic cannot be put under control through cluster-busting,” says a member of a health-ministry advisory panel. “It is necessary to take powerful steps to prevent infections.”

Positive early findings from the trial of a COVID vaccine developed by pharmaceutical giant AstraZeneca and the University of Oxford, UK, have been beset with questions. Scientist and writer Hilda Bastian, who specializes in assessing clinical epidemiology, notes the key issues in Wired. The data were combined from two trials, one in the United Kingdom and one in Brazil, that used different protocols. A striking improvement in efficacy of the vaccine was noticed because of a mistake: some trial participants were inadvertently given a lower first dose. In that group, the vaccine was 90% effective, compared with 62% in people who got two full doses. And the half-dose group contained no one over the age of 55 — one of the demographics that is most at risk of severe COVID. Scientists worry that the uncertainty, and the way the preliminary results were communicated, could dampen public trust and hinder the successful rollout of COVID vaccines overall.

AstraZeneca executive Menelas Pangalos said the company is planning a global trial to compare the two dosing regimens. “I think the best way of reflecting the results is in a peer-reviewed scientific journal, not in a newspaper,” Pangalos told The New York Times.

We must stare COVID’s horrors in the face

Haunting photos and videos from inside hospitals can make COVID-19’s true toll visible, argues science journalist Roxanne Khamsi. But for many reasons, such images have remained hidden: journalists rightly shy away from uncertain sources and hospitals want to shield the privacy of staff and patients (and avoid malpractice lawsuits, especially in the United States). The result is that many people still don’t take COVID-19 seriously. “It’s time to pull back the curtain on the suffering caused by Covid-19,” writes Khamsi. “If many Americans still see the pandemic as a faraway problem, that’s because many Americans aren’t seeing the pandemic at all.”

Virologist and global-health researcher Angela Rasmussen is among the female pandemic scientists who have faced frustration, exhaustion and harassment as experts in the public eye. (Forbes)

Oday Abushalbaq is a PhD candidate in molecular neuroscience in the United States and co-leads a molecular-neuroscience team in Abu Dis, east of Jerusalem. “So, I am a student and mentor at the same time,” says Abushalbaq. Leading a team from 9,000 kilometres away while completing PhD training would not be possible without three key habits, he says: communication through regular e-mails and virtual meetings, setting a weekly schedule and leaning on his own mentors.

After human–robot interaction researcher Anna Henschel swapped universities mid-PhD, she realized that having mentors beyond her supervisor was invaluable. “Try to imagine different mentors in the positions of role model (a person in your outer circle who inspires you), career guide (someone who infrequently supports your career progression) and personal adviser (someone who provides psychosocial support)”, she recommends. She also offers tips on how to find mentors, even during the COVID-19 pandemic.

The people of the Swinomish tribe in Washington State have a deep knowledge of how climate change is affecting their coast — after all, the People of the Salmon have fished there for 10,000 years. They have responded with a climate strategy that takes the long view, restoring salmon habitat, rebuilding oyster reefs and managing wetlands while taking social and cultural beliefs into account. “It’s a different worldview,” says resource management scientist Jamie Donatuto, the tribe’s environmental-health officer. “The salmon and the crabs and the clams are relatives. They’re living relatives. They’re not just resources.”

Scientists can feel as if they’re in a communications arms race with COVID misinformation, but must remain honest about the complexities and trade-offs behind public-health advice, argues statistician David Spiegelhalter. (The Guardian)