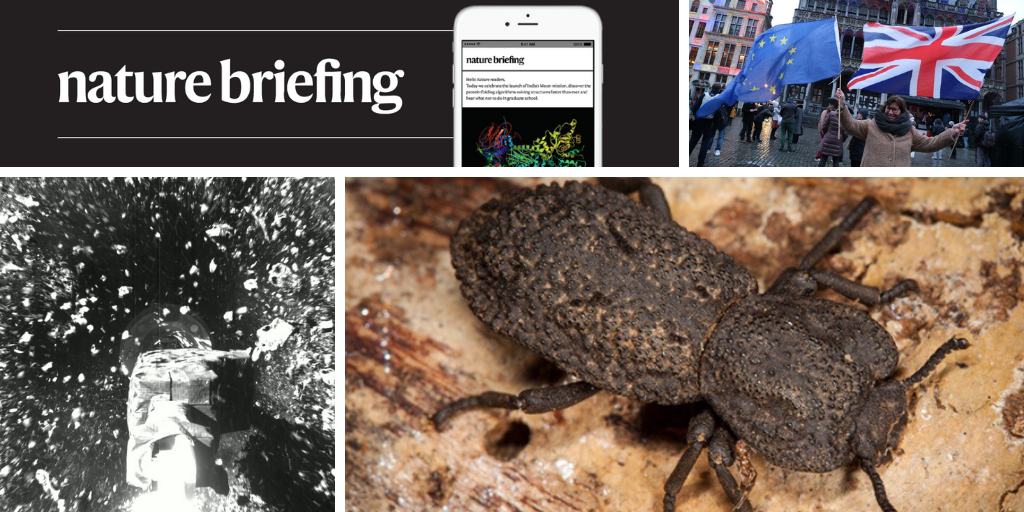 Material scientists have discovered what makes the diabolical ironclad beetle (Phloeodes diabolicus) almost uncrushable. Scans showed that sections of the beetle’s exoskeleton lock together like a 3D jigsaw puzzle. The interlocking parts are able to shed layers, like an onion, as pressure approaches breaking point, rather than being ripped off. The beetle could inspire new types of material: 3D-printed structures with similar layers were twice as resistant to being pulled apart as was a type of joint commonly used by engineers.

Scientists in the United Kingdom are on tenterhooks as government negotiators struggle to agree on the country’s future relationship with the European Union — which begins, ready or not, on 1 January 2021.

• At the top of UK scientists’ wish list is some kind of membership in the EU’s flagship funding programme, Horizon Europe.

• Equal standards for regulations, data and clinical trials are important to keep research from being disrupted.

• Scientists are working to ensure that joint facilities, such as those for weather and nuclear research, keep running smoothly, and that the flow of laboratory equipment and consumables remains strong.

• Much progress has been made on changing the immigration system, and policymakers have created special measures for scientists. The challenge will be attracting scientists to the United Kingdom, which might suffer from the appearance of parochialism and has one of the most expensive immigration systems in the world.

US pharmaceutical company Purdue Pharma, which makes OxyContin, has agreed to a criminal and civil settlement with the US justice department for more than US$8 billion. The company will plead guilty to three criminal charges, including conspiracy to defraud the United States by falsifying an effective drug diversion programme and violating federal anti-kickback laws by paying doctors via a speakers programme. The settlement doesn’t satisfy some people who wanted to see more accountability from Purdue and the Sackler family, which became hugely wealthy from the now-bankrupt company, for their role in the opioid crisis .

Herd immunity without a vaccine is a terrible idea

The term ‘herd immunity’ used to be typically discussed as a desirable result of wide-scale vaccination programmes. During the pandemic, it has become a shorthand for allowing the coronavirus to run its course. It’s a shift that horrifies many public-health researchers. “We have never successfully been able to do it before, and it will lead to unacceptable and unnecessary untold human death and suffering,” says Kristian Andersen, an immunologist at the Scripps Research Institute in La Jolla, California. Nature digs deep into the misunderstandings that fuel the arguments in favour of the approach and sets out the relevant facts.

As children in Brazil, life scientists Luciana Leite and Luisa Diele-Viegas were told that biology was not a wise move for intelligent women, and they should pursue medicine or engineering instead. “In countries with stark gender and social inequality, girls are under even greater pressure to choose careers that can ensure their quality of life,” they write. Now they are using their own negative experiences to research the impact of societal and family expectations on women’s career choices.

Quantum tunnelling — when an atom shimmies its way through a barrier in a way forbidden by classical physics — can happen faster than light. Measurements of rubidium atoms fired at a barrier made of laser light back up long-standing theoretical predictions that tunnelling offers a short cut through space. With a sufficiently thick barrier, the trip could even happen faster than light travelling the same distance through empty space. But don’t start saving for your superluminal smartphone just yet: there’s no way to send a signal this way, says a separate study. Particles make it through the barrier so rarely that it’s never faster than light to send a message this way.

Magician and sceptic James Randi, who spent a lifetime fooling people and revealing how people are fooled, has died at the age of 92. In 1976, along with astronomer Carl Sagan and science-fiction writer Isaac Asimov, Randi founded what is now the Committee for Skeptical Inquiry, which promotes the scientific investigation of claims of the paranormal. For many years, Randi offered a US$1-million prize to anyone who could verify such a claim under rigorous scientific protocols (there were no winners).

Image of the week

In this video, OSIRIS-REx rehearses the approach it’ll take to Bennu’s surface. Here, the craft’s imager captures the sampling arm descending to within 40 metres of the asteroid over about a 14-minute period. Credit: NASA/Goddard/University of Arizona

This series of images from 20 October shows the SamCam imager’s field of view as the NASA OSIRIS-REx spacecraft touches down on asteroid Bennu’s surface, over 321 million kilometres away from Earth.

Sociologist Tressie McMillan Cottom has noticed a change since she was awarded a MacArthur ‘genius grant’. (Personal blog | 3 min read)