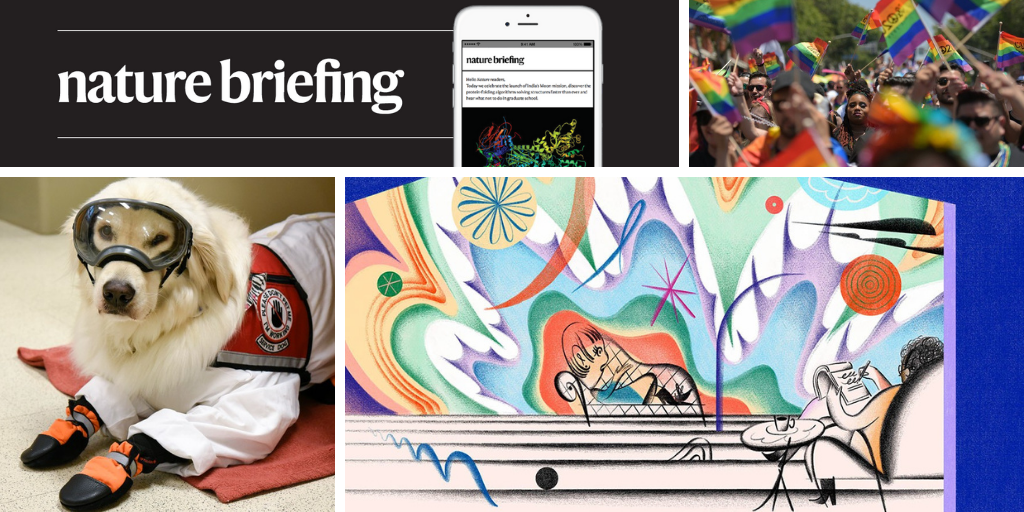 Regulators will soon grapple with how to safely administer powerful drugs such as ecstasy and psilocybin to treat depression and post-traumatic stress disorder. There are risks, but many researchers are excited after several trials showed dramatic results. Now, study designers must grapple with questions such as how to blind trials and how to control for the effects of the test environment and the therapist guides.

Scientists who are lesbian, gay, bisexual, transgender or queer (LGBTQ) are more likely to experience harassment and career obstacles than their non-LGBTQ colleagues. A survey of more than 25,000 US-based researchers, including more than 1,000 who identify as LGBTQ, found that LGBTQ scientists also experience some health and well-being problems more often than their non-LGBTQ peers. “The idea that ‘scientists only care about the science’ is nothing but a fairy tale we tell each other to avoid confronting the dark realities of academia,” says science journalist Alfredo Carpineti, who co-founded the UK organization Pride in STEM.

Researchers will soon reveal the results of an experiment with the power to overturn physics. Muon g-2, at the Fermi National Accelerator Laboratory in Illinois, is a more precise version of an experiment that in 2001 found that the muon, a heavier cousin of the electron, is slightly more magnetic than theory predicts. It’s a sign that entirely new particles could be impacting its properties. To avoid subconsciously steering the latest results, Muon g-2 runs on a clock ticking at a frequency known by only two trusted employees. Once the analysis is complete, the pair will reveal the key to converting the clock into real time, which will determine whether the tantalizing anomaly still stands.

COVID vaccine distribution in the United States has been hobbled by a web of mismatched technology systems, inconsistent vaccine supplies, under-resourced states and a lack of coordination about getting shots to people once they arrive at local clinics. US President Joe Biden’s administration has a goal of delivering 100 million doses in 100 days. To keep that promise, experts say the federal government will need to supply states with better resources and technology. “National coordination will be a game-changer,” says Hana Schank, from the think-tank New America.

When art student Aaron Ansuini tried to get in touch with his art-history professor, he instead found an obituary. Leading art historian François-Marc Gagnon had died in 2019, but his online lectures lived on — without his students, or even the instructor administering the class, being aware of it. The case at Concordia University in Montreal, Canada, raises questions about how such situations should be communicated and about a lecturer’s control over future use of their work. In any case, Gagnon’s son says that his father would have been thrilled that, through online learning, he still had an audience. “He loved and appreciated that he could reach more people faster and forever,” says functional zoologist Yakir Gagnon.

Despite rising numbers of support dogs, many universities remain unprepared for their presence on campus and in laboratories. Scientists who use animal helpers are working to open the doors for researchers and their canine companions.

Evolution seems to have shaped the immune system of bats so that they have a unique ability to balance defence and tolerance of disease. This has resulted in the only flying mammal becoming an ideal reservoir host for viruses. In a technical (but very readable) overview, five researchers who study emerging infectious disease explore the exceptional abilities of bats and their ramifications for human health.

Image of the week

This is the first-ever atomic-resolution video of salt crystals forming in real time. After “more than half-a-century of teaching and researching in the field of solid-state materials chemistry…I never thought I would ever see” such a video, says Geoffrey Ozin. “This functionally simple but remarkable example of human ingenuity has set the stage for a revolution in how we study the embryonic steps in the nucleation and growth of organic, inorganic, polymeric, and biologic crystals.” (Advanced Science News | 4 min read)

Nobel-prizewinning biochemist Robert Lefkowitz shares his ten rules for being an effective mentor (and having fun doing it). (Inside Higher Ed | 13 min read)