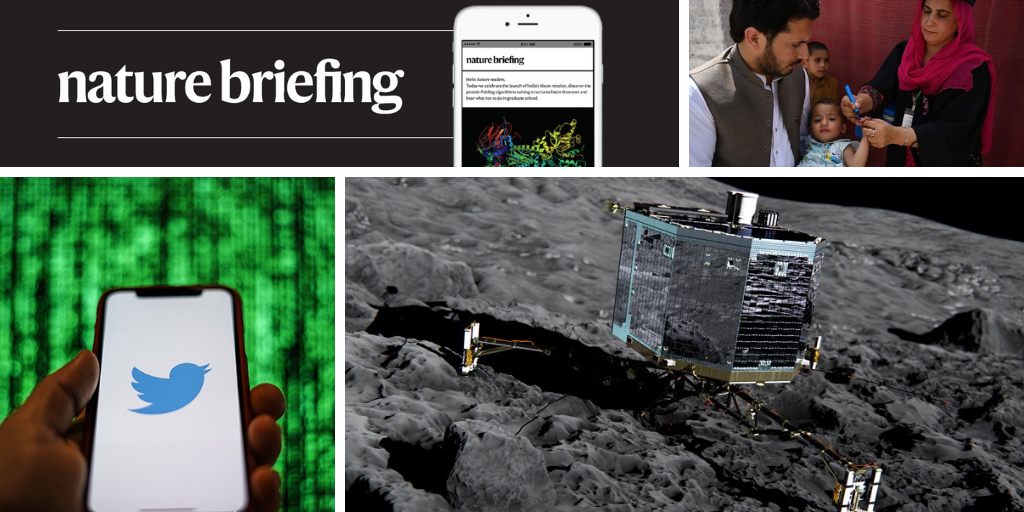 The unfortunate crash landing of the European Space Agency (ESA)’s robotic probe, Philae, on a comet in 2014 has yielded a fresh insight about the surface of comets: they’re very soft. In Philae’s final moments, it touched down on comet 67P/Churyumov–Gerasimenko and bounced twice before ending up on its side, cutting its mission short. After locating the site of the second touchdown in images taken by the mothership Rosetta, researchers found an imprint of the craft, which they used to measure the strength of the ice beneath the comet’s surface. “It’s softer than the lightest snow, the froth on your cappuccino or even the bubbles in your bubble bath,” says ESA scientist Laurence O’Rourke.

Social-media platforms such as Twitter were used to sow discord in the United States in the run up to the 2016 presidential election. With the 2020 election now in progress, researchers are more worried than ever that bots will interfere. Data scientist Emilio Ferrera says that fake accounts have become more sophisticated and harder to detect. In a Nature Q&A, Ferrera speaks about how he and his team monitor bot activity, and their findings about interference in the current election.

Wild polio has almost been eradicated. But a version of the virus that arose naturally from the weakened polio virus used for vaccination is increasing. Now, a vaccine against this vaccine-derived polio strain is expected to receive emergency approval before the end of the year. If it does, it will be the first time the World Health Organization (WHO) has steered an unlicensed vaccine through its emergency listing process. “It’s going to be a very good exercise for us to look [at] how this works,” says WHO adviser Alejandro Cravioto. “Probably some of the COVID-19 vaccines will have to be authorized for use in the same way.”

The amount wasted each year on inefficient or unnecessary artificial light in the United States, according to estimates. (BBC News | 4 min read)

Data gathered worldwide are increasingly suggesting that schools are not hotspots for coronavirus infections. Despite fears, COVID-19 infections did not surge when schools and day-care centres reopened after pandemic lockdowns eased. And when outbreaks do occur, they mostly result in only a small number of people becoming ill. “There’s no such thing as zero transmission or zero risk,” says paediatrician Fiona Russell. But she adds that the risk of infection at school is low, especially when community transmission is low.

Cardiologist Eric Topol says the antiviral drug remdesivir should not have been approved to treat COVID-19 without consulting a group of experts who review experimental treatments. (Science | 13 min read)

Read more about these studies in Nature’s continuously updated selection of the must-read papers and preprints.

Small fox-like animals called raccoon dogs (Nyctereutes procyonoides) can be infected with SARS-CoV-2 and can spread it among themselves, a study has shown. The findings suggest that SARS-CoV-2 could spread undetected in fur farms in China, where more than 14 million raccoon dogs live in captivity.

Professional basketball players in the United States have helped to provide details of SARS-CoV-2’s life cycle. When US basketball games resumed in July after a four-month hiatus, staff and athletes were regularly monitored using a highly sensitive test that can assess a person’s viral levels. Researchers found that two COVID tests given within two days can indicate whether a person’s viral level is rising or falling — information that can influence treatment decisions.

A large-scale trial has shown that ‘pooled’ testing for SARS-CoV-2 — where samples from multiple people are combined into one batch that is then analysed for the virus — can be highly efficient, even more so than theory predicted.

Get more of Nature’s continuously updated selection of the must-read papers and preprints on COVID-19.

The magician James Randi devoted much of his career to debunking extraordinary claims. He used showmanship to challenge credulity with skepticism and rationality. In a Nature obituary, science writer Philip Ball recalls his maxim, increasingly apt in a world where the descendants of medieval mountebanks ply their wares online: “Don’t be too sure of yourself. No matter how smart or well educated you are, you can be deceived.”