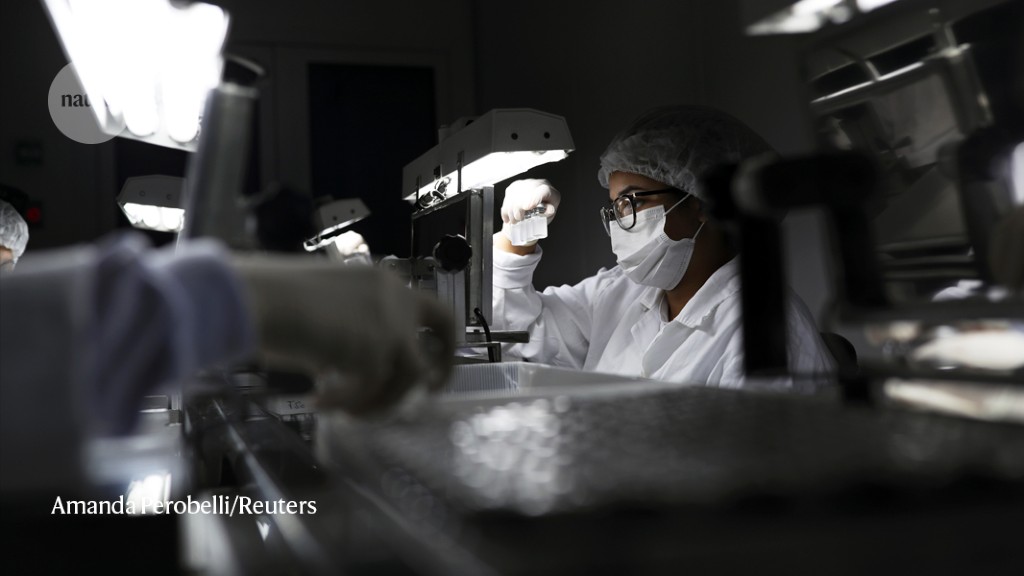 COVID vaccines might be less potent against new viral variants

Emerging, fast-spreading variants of the coronavirus might reduce the protective effects of two leading vaccines.

Michel Nussenzweig at the Rockefeller University in New York City and his colleagues analysed blood from 20 volunteers who received 2 doses of either the Moderna or the Pfizer–BioNTech vaccines (Z. Wang et al. Preprint at bioRxiv https://doi.org/frdn; 2021). Both vaccines carry RNA instructions that prompt human cells to make the spike protein that the virus uses to infect cells. This causes the body to generate antibodies that recognize the spike protein.

Between 3 and 14 weeks after the second jab, study participants developed several types of antibody, including some that block SARS-CoV-2 from infecting cells. Some of these neutralizing antibodies were as effective against viruses carrying certain mutations in the spike protein as they were against widespread forms. But some were only one-third as effective at blocking the mutated variants.

Some of the mutations that the team tested have been seen in coronavirus variants that were first identified in the United Kingdom, Brazil and South Africa. The findings, which haven’t been peer reviewed, suggest that vaccine-resistant variants might emerge.

Long-awaited results on the effectiveness of a leading Chinese COVID-19 vaccine were tinged with disappointment. But researchers say the vaccine could still help to reduce deaths from the disease.

Scientists in Brazil reported on 12 January that CoronaVac, developed by Beijing-based Sinovac, was 50.4% effective at preventing severe and mild COVID‑19 in late-stage trials. That’s significantly lower than the 90% efficacies of several leading vaccines.

The CoronaVac figures were also much lower than those from early trials of the same vaccine in Turkey and Indonesia, and below the efficacy first reported by the Brazil trial team. Researchers at the Butantan Institute in São Paulo had announced on 7 January that the vaccine was 78% effective at preventing the disease — but later revealed that the figure was based on the narrow criterion of people needing medical attention.

Nevertheless, if the latest results check out — they have not been peer reviewed — the two-dose vaccine could be immediately beneficial in countries where outbreaks are raging, such as Brazil, say researchers. “When you’ve got communities that are absolutely desperate, and have no other choice, then this is a really great thing to have,” says Hilda Bastian, who studies evidence-based medicine at Bond University in Gold Coast, Australia.

Francis Collins to stay on at NIH Under Biden

Geneticist Francis Collins will continue in his role as the head of the US National Institutes of Health (NIH), President Joe Biden announced on 15 January.

Former president Barack Obama appointed Collins to lead the biomedical-research agency in 2009, and his successor, Donald Trump, extended Collins’s term as director in 2012.

With an annual budget of just over US$40 billion, the NIH has prioritized funding for research on the coronavirus in the past year, as well as efforts to find treatments and vaccines for COVID-19.

“I will do my best to continue to lead this great agency, especially when NIH’s role in fighting this pandemic is so critical,” Collins said on Twitter after Biden’s announcement.

Collins is best known for leading the Human Genome Project, the massive public effort to sequence the human genome that was declared complete in 2003. Trained as a physician, he focused his early research on disease-causing genes, and co-discovered the gene for cystic fibrosis. He was director of the NIH’s National Human Genome Research Institute between 1993 and 2008.