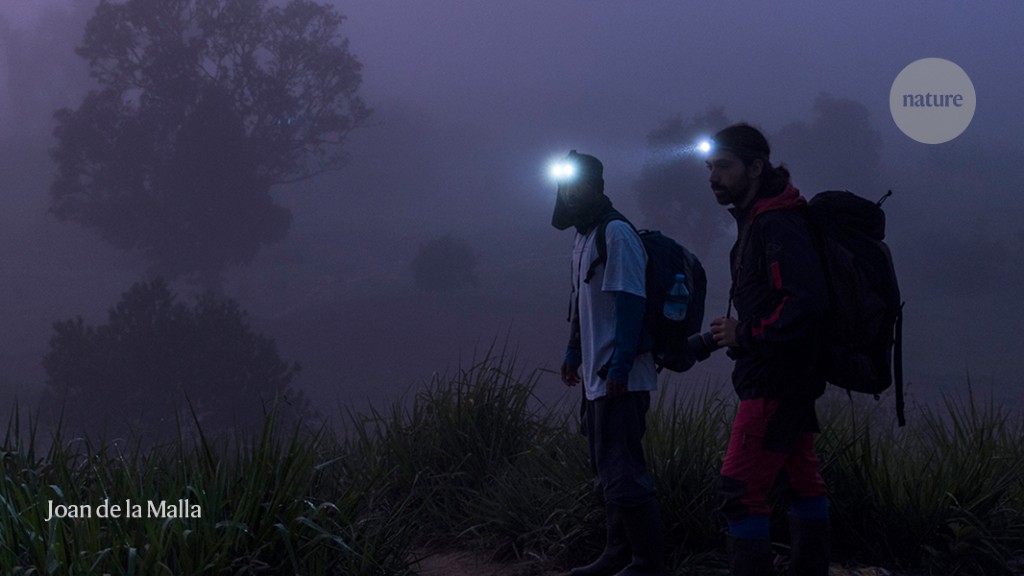 I became fascinated by bats in 2011, after I started working with them in Central Amazonia. But this photo was taken near Ranomafana National Park in eastern Madagascar, during an expedition organized by the University of Helsinki. My colleague, Adrià López-Baucells, and I led the bat research. I am in the white T-shirt.

We had spent the night in a village capturing bats using mist nets, a type of net with pockets. We were about to head to the forest to retrieve ultrasonic recorders that collect bioacoustic data. That is why we have headlamps — at night in the forest, you soon realize that a high-quality headlamp is your most precious piece of equipment.

Among the more than 1,400 bat species worldwide, we can find frugivores, carnivores, insectivores, some that feed on fish, and others that have large tongues to feed on nectar. Bats are enormously important for conservation. In the Amazon, for instance, they are the main seed dispersers of secondary-forest trees, in effect planting forest habitats for the huge diversity of species found there.

Roughly 1% of Madagascar’s forests are converted to crops every year. Our team aimed to uncover how this affects bat communities. We learnt that multiple Madagascan bat species hunt insects that swarm over rice paddies. We also discovered that they eat insects classified as agricultural pests and human-disease vectors, such as Anopheles mosquitoes, which spread malaria. The balance is fragile, because many bat species are not able to survive without the forest, where they roost.

I am now researching bat ecology in the Portuguese archipelago of Madeira, where I am from. I want to know whether bats here are also helping humans by suppressing agricultural insect pests and disease vectors — a subject that has gained new relevance during the coronavirus pandemic.