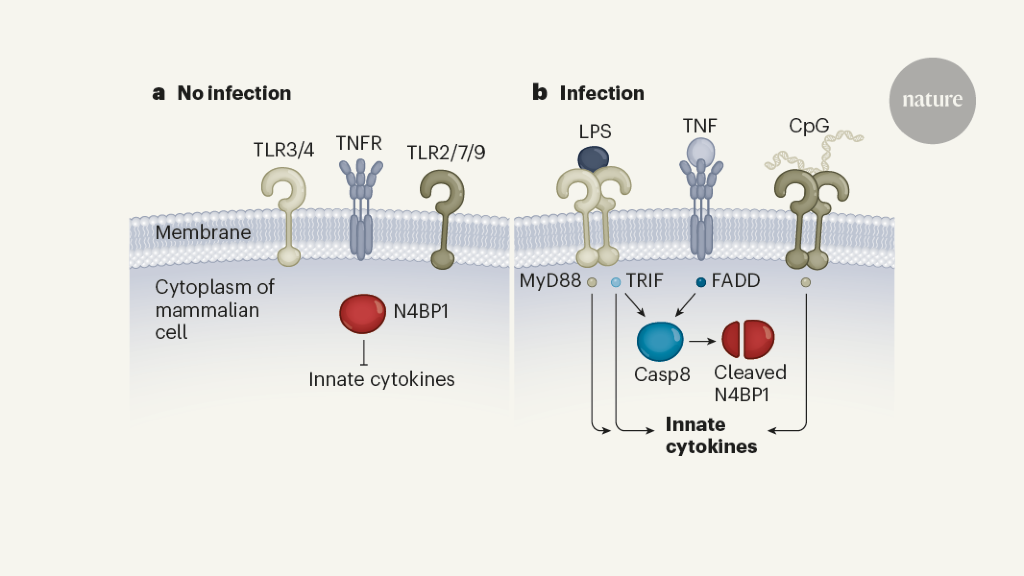 Activation of the protein caspase-8 can have consequences that include triggering a type of cell death called apoptosis, preventing another type of cell death termed necroptosis, and promoting gene expression that leads to inflammation. How the activity of this single protein regulates these distinct functions is unclear. Writing in Nature, Gitlin et al.1 shed light on how caspase-8 drives pro-inflammatory responses in mammalian cells (Fig. 1).

Caspase-8 is a protease, an enzyme that cleaves its target proteins. It is a central regulator of the various possible outcomes of cell-signalling pathways leading from receptors of the Toll-like receptor (TLR) or the tumour-necrosis factor receptor (TNFR) superfamilies2. Such signalling cascades ultimately activate the transcription-factor proteins NF-κB and AP-1, which modulate the expression of hundreds to thousands of genes that mediate inflammatory and antimicrobial responses during the innate immune response — the earliest response to infection.

Among the best studied of these genes are those encoding cytokine proteins that promote inflammation, which include tumour-necrosis factor (TNF), IL-6, IL-1 and IL-12, as well as members of a subfamily of cytokines called chemokines. These factors collectively marshal immune defences against infection, but can be associated with severe disease if their expression is not properly controlled3. Indeed, anti-TNF therapies are used extensively in the treatment of inflammatory diseases, but such treatments can also blunt defence against infections. 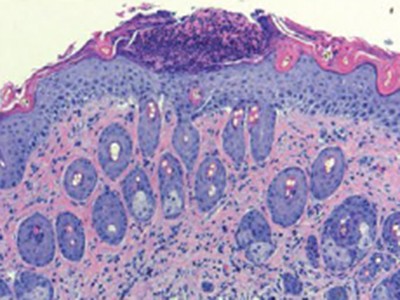 One potential outcome of caspase-8 activation after TLR or TNFR signalling is apoptosis. However, NF-κB, in addition to inducing the expression of mediators of inflammation, induces expression of genes that encode ‘survival factors’, which prevent cells from undergoing apoptosis4,5. In most healthy cells, therefore, these TLR or TNFR signalling pathways induce inflammation but do not cause cell death. However, if this receptor-mediated signalling is accompanied by a blockade of NF-κB, which occurs during infection by certain microorganisms, this triggers apoptosis that depends on caspase-8 and the enzyme RIPK1. This pathway provides a back-up host-defence mechanism to block the spread of pathogens that disrupt immune-system signalling6–8.

Caspase-8 is also involved in the apoptosis of T cells of the immune system, which requires the activity of the proteins Fas and its ligand FasL. A deficiency in Fas or FasL results in a condition called autoimmune lymphoproliferative syndrome (ALPS), in which there is overproduction of immune cells9. Surprisingly, people with mutations that inactivate either caspase-8 or the protein FADD (which activates caspase-8 in response to signalling from TNFR) have an ALPS-like condition that is accompanied by immunodeficiency and higher-than-normal susceptibility to infections. This suggests that caspase-8 has additional functions in this context beyond regulating apoptosis10,11.

Consistent with this idea, loss of caspase-8 inactivation in human T cells is associated with defects in the NF-κB-mediated gene expression that results from T-cell receptor stimulation10,11. However, because caspase-8 also has a key role in preventing necroptosis, which is an inflammatory form of caspase-independent cell death12,13, it was initially unclear whether defects in gene expression in the setting of caspase-8 deficiency might be due to aberrant necroptosis14. 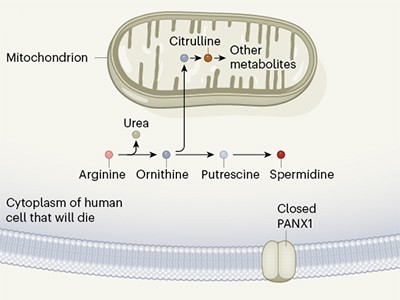 A direct cell-intrinsic function of caspase-8 in regulating the expression of genes involved in innate immunity was subsequently revealed by the finding that deleting genes encoding the necroptosis-activating proteins RIPK3 or MLKL, in the setting of caspase-8 or FADD deficiency, reduced the activation of key inflammatory cytokine genes15,16. Caspase-8 deficiency has also been linked to reduced activation of the enzyme IKK, which is part of the pathway leading to NF-κB8,17. Nevertheless, how the single enzymatic activity of caspase-8 might promote apoptosis, yet also enable inflammatory gene expression, has remained mysterious. Now, Gitlin and colleagues have identified a direct target of caspase-8 whose inactivation by cleavage promotes the induction of a subset of the TLR-dependent inflammatory cytokines, providing a mechanistically satisfying explanation for how caspase-8 facilitates inflammatory gene expression.

To identify caspase-8 cleavage targets in cells stimulated by TLR signalling, Gitlin et al. took advantage of the fact that caspases generate cleaved proteins that contain the amino-acid residue aspartate at their amino termini. Using an antibody that can recognize such aspartate residues, and mass spectrometry to identify the proteins, Gitlin and colleagues analysed extracts from mouse cells stimulated by exposure to lipopolysaccharide molecules. The authors compared the results for cells that did or did not receive a caspase inhibitor, and through this and other experiments identified the protein N4BP1 as a caspase-8 target that is cleaved in response to TLR or TNFR stimulation (Fig. 1).

N4BP1 was previously identified as a binding partner for the immune-signalling enzymes Nedd4 and Itch, and as a factor that restricts viral replication18,19. Gitlin et al. observed that N4BP1 was cleaved in a caspase-8-dependent manner in wild-type cells, or those lacking MLKL, following stimulation through the receptors TLR3, TLR4, TNFR or Fas. This cleavage occurred within one hour of stimulation. Among the TLRs tested, only TLR4 and TLR3 induced this rapid cleavage, which occurred after caspase-8 was activated by the TLR-associated protein TRIF.

The authors then confirmed that a deficiency in N4BP1 did not affect inflammatory cytokine expression in cells stimulated by lipopolysaccharides because such stimuli normally induce caspase-8-dependent inactivation of N4BP1. Crucially, Gitlin and colleagues report that the deletion of the gene encoding N4BP1 in cells also lacking caspase-8 reversed the defect in lipopolysaccharide-induced expression of several key cytokines, including TNF and IL-6. This observation provides direct evidence that caspase-8-dependent control of gene expression occurs, at least in part, through inactivation of N4BP1, and demonstrates that caspase-8 activity removes a brake on inflammatory gene expression. 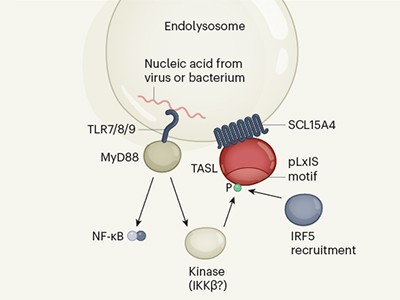 During infection, cells might encounter both pathogen-specific molecules (PAMPs) and other immune mediators, such as TNF, that can synergize with both TRIF- and MyD88-dependent TLRs to enhance inflammatory responses. Interestingly, Gitlin et al. observed that TNF stimulation enhanced gene expression downstream of MyD88-dependent TLRs, and that this enhancement required the cleavage of N4BP1 by caspase-8 that is induced by TNF. The authors’ study therefore highlights N4BP1’s role as a broad negative regulator of TLR- and TNF-induced gene expression.

Mice engineered by the authors to lack N4BP1 survived embryonic development as usual and were fertile and essentially normal, but they developed a mild, age-dependent inflammation and immune dysregulation starting at around 14 weeks of age. This suggests that N4BP1 limits baseline inflammatory responses in vivo. Moreover, although blocking TNF signalling in wild-type mice increased their susceptibility to infection by the bacterium Streptococcus pneumoniae, most of the mice lacking N4BP1 survived this infection. This raises the possibility that the increased susceptibility to bacterial infections in people who receive anti-TNF treatment might be the result of a failure to inactivate N4BP1. Altogether, this work identifies a new regulator of a key signalling pathway of the innate immune system, and reveals a direct molecular target of caspase-8 in its role in controlling gene expression.

Exactly how N4BP1 suppresses cytokine gene expression is unclear. A deficiency in caspase-8 is associated with lower-than-usual levels of phosphorylation (addition of a phosphate group) of IKK8,17. However, Gitlin and colleagues found that deletion of N4BP1 does not restore wild-type levels of IKK phosphorylation in cells that lack both caspase-8 and MLKL, nor does it affect other aspects of the pathway leading to NF-κB activation, implying that N4BP1 probably regulates gene expression independently of NF-κB.

Notably, Gitlin et al. found that a substantial proportion (45%) of lipopolysaccharide-induced genes whose transcription was reduced in the absence of caspase-8 had higher levels of transcription if cells were deficient in both caspase-8 and N4BP1. Moreover, although caspase-8 deficiency blunts the expression of multiple cytokines, the genes most strongly affected by the presence of N4BP1 are those that encode the cytokines IL-6, TNF and G-CSF, which indicates that multiple caspase-8-dependent mechanisms probably integrate immune signalling to optimize inflammatory gene expression. Finally, how caspase-8 triggers apoptosis in some settings, yet mediates gene expression in non-apoptotic cells, also remains mysterious. Much remains to be learnt about this functionally versatile protein, and this study points the way to new avenues of discovery.