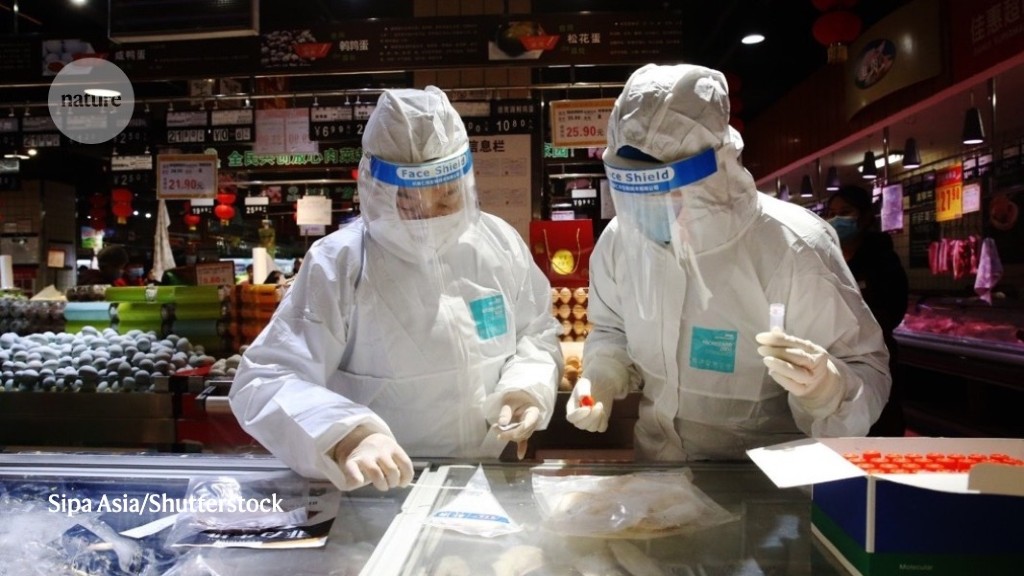 Momentum is growing for the suggestion that the coronavirus can spread from infected frozen wildlife. A World Health Organization (WHO) fact-finding mission in China did not rule out the idea that this mode of transmission contributed to early outbreaks of COVID-19 — although investigators say it’s unlikely to have started the pandemic.

At a press conference earlier this month, the WHO team concluded that the virus probably came from bats, and was passed to people through a live intermediate animal. But the team also said it was important to investigate whether frozen meat from wild animals bred on Chinese farms might have been contaminated with the virus and the source one of the earliest reported outbreaks, at the Huanan Seafood Market in Wuhan, China.

“We all thought the cold-chain stuff was a reasonable hypothesis” that needed to be considered, says team member Dominic Dwyer, a virologist at New South Wales Health Pathology in Sydney, Australia. But more work needs to be done to establish how frozen wildlife might have become contaminated, he says. A report from the WHO team is expected to lay out data on the hypothesis next week.

But the WHO teams’ call to investigate infected frozen meat have become confused with suggestions from China that the virus can spread on frozen surfaces. For months, media outlets in China have pushed the idea that the virus might have arrived in Wuhan on frozen wildlife imported from abroad. Subsequent local outbreaks of SARS-CoV-2 have also been linked to imported frozen food. Scientists in China have also published a growing body of evidence that transmission on frozen meat is theoretically possible.

Many scientists outside China, however, argue that this ‘cold chain’ theory is a red herring in the overall search for the pandemic’s origin, and is an attempt to deflect criticism. They say it is rare for SARS-CoV-2 to be passed from one person to another through contaminated surfaces.

Studies from China suggests that surface transmission on frozen surfaces is feasible. A preprint1 posted on bioRxiv by researchers in Singapore in August, which has not been peer reviewed, found that SARS-CoV-2 can remain infectious on the surface of frozen or refrigerated meat for more than three weeks.

Two months later, researchers in China linked2 a June outbreak in Beijing to the city’s Xinfadi Market. The first cases came after 56 days with no community transmission in the city, and were connected with a distinct strain of SARS-CoV-2. Outbreak investigators found viral particles from the same strain on cold-stored salmon at a market stall.

The WHO investigation team took these findings into account. “We spent a lot of time going through the evidence from the Beijing Xinfadi Market outbreak. It’s a really good piece of work. They really went into detail to try to find the connections to a source,” says team member Peter Daszak, president of EcoHealth Alliance, a non-profit global-health organization in New York City.

In a third study3, published last November, another group of scientists in China reported isolating infectious virus from the packaging of frozen cod that was thought to have been the source of infection in dock workers in Qingdao, in the eastern province of Shandong, in September.

“We have no reason to assume that it might not happen,” says Erwin Duizer, a virologist at the Dutch National Institute for Public Health and the Environment in Bilthoven.

In the wake of these and other outbreaks in China, authorities introduced mandatory disinfection of imported frozen goods in November to prevent surface transmission.

The WHO team do not think the pandemic started from transmission on food or packaging. However, they consider it possible that an animal infected with the virus might have been the source of the large, early outbreak at the Huanan Seafood Market.

Before the Huanan market was closed in January 2020, 10 of its 653 stalls sold live or frozen wildlife captured in the wild or brought from farms. Animals including racoons and ferret-badgers are known to be susceptible to coronaviruses, Dwyer says. When investigators checked the market after the closure, none of the meat or animals they sampled — including frozen carcasses — tested positive for SARS-CoV-2. However, Dwyer says it’s possible that not enough samples were taken to rule them out as a source of infections.

If frozen or thawed carcasses were infected with the virus , handling the animals could have posed an infection risk, says Andrew Breed, a veterinary epidemiologist at the University of Queensland in Brisbane. This could be especially true of intermediate host animals, which are prone to shedding large volumes of virus, because their immune systems aren’t adapted to fend off the infection. Frozen bushmeat has been linked to outbreaks of viruses such as Ebola in Africa, so it wouldn’t be the first time, notes Duizer.

But Breed adds that little is known about the condition of food during transport to the market. “Freezing and thawing will definitely really reduce viability for certain types of viruses, including coronaviruses,” he says.

Duizer and others argues that it’s much more likely that SARS-CoV-2 first passed to people from a live animal.

Most of the wild animals traded in China are live, says Chris Walzer, a veterinary physician with the Wildlife Conservation Society in New York City.

Many of them arrive at markets from farms in China. “You bring all those naturally distant species to one location, so there are more chances to incubate and generate a new virus,” says Wang.

Dwyer says it’s crucial to find out whether workers at wildlife farms that supplied products to Wuhan markets have antibodies from infection with SARS-CoV-2. That, he says, will be key to homing in on the ultimate origin of the pandemic.

Infosys to Develop Quantum Computing Capabilities on Amazon Web Services, Will Use Amazon Braket
Space sustainability makes slow progress at the United Nations
Space community ponders right-of-way rules for space traffic
Kendall: If China can’t beat the U.S. in the air it will try in space
Climate Week: Getting it done and making it real