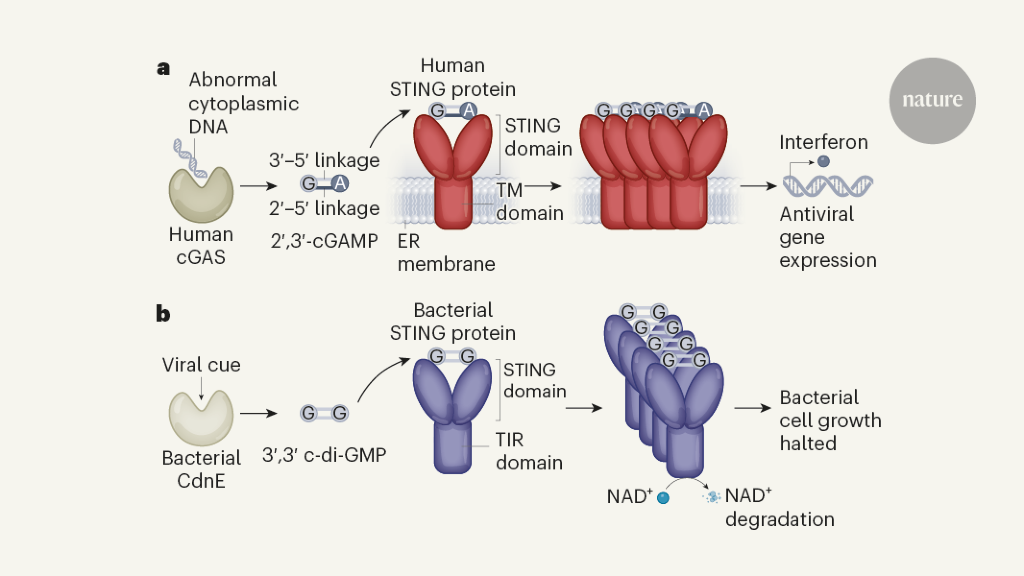 Many multicellular animals respond to disease-causing agents, termed pathogens, using an evolutionarily conserved defence pathway called the cGAS–STING pathway1,2. Reports in the past few years of cGAS- and STING-like proteins in bacteria raised the possibility that this pathway is more evolutionarily ancient than was previously thought3–5. Writing in Nature, Morehouse et al.6 demonstrate that a functional cGAS–STING pathway exists in bacteria that can potently arrest bacterial growth, possibly as a means of defence against a type of virus known as a bacteriophage, or phage for short, that infects bacteria. The authors also provide evidence that the STING protein originated in bacteria before it was acquired by multicellular animals — our metazoan ancestors.

When human cells sense the presence of pathogenic DNA, this causes the cGAS–STING pathway to mount an inflammatory immune response. The enzyme cGAS (Fig. 1) is activated when it binds to DNA in the cytoplasm — the abnormal localization of DNA there can occur during viral infection7. Active cGAS produces a type of molecule called a cyclic dinucleotide (CDN), using the nucleotides guanosine triphosphate (GTP) and adenosine triphosphate (ATP) as starting materials to make a CDN called 2′,3′-cGAMP. This binds to STING, which is located on the membrane of an organelle called the endoplasmic reticulum. STING then activates a signalling cascade that ultimately drives the expression of a battery of antiviral genes8,9.

CDN-based anti-phage signalling systems, known as CBASS systems, have been found in bacteria4. These highly diverse systems are composed of cGAS-like enzymes and downstream proteins called effectors that either kill bacteria or inhibit bacterial growth on infection by a phage, thereby stopping the phage from spreading. There are many types of CBASS effector protein10. Some of them contain STING-like sequences of amino-acid residues4, raising the intriguing possibility of an intact cGAS–STING pathway in bacteria.

Using X-ray crystallography, Morehouse and colleagues showed that two different bacterial species have a protein with STING-like amino-acid sequences that is similar in structure to mouse and human STING. All of these contain a characteristic, V-shaped binding pocket that binds to CDNs. The overall structures of bacterial and mammalian STING are similar. 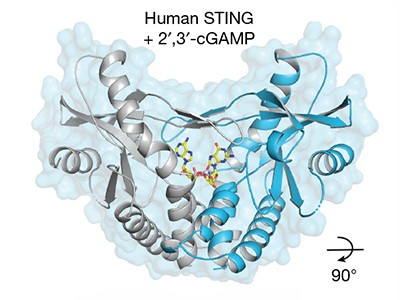 However, the authors noted some key differences in the composition of amino-acid residues and in the architecture of the CDN-binding pocket of bacterial STING, suggesting that its CDN-binding specificity might differ from that of mammals. The authors used these structures to guide the construction of a phylogenetic tree representing the evolutionary relationships between STING proteins from bacteria and animals. This led them to the important finding that STING probably evolved in bacteria before being acquired by an early metazoan.

cGAS-like proteins in bacteria produce many types of CDN, as well as cyclic-oligonucleotide molecules5. Morehouse et al. studied the bacterial cGAS-like protein CdnE to determine its biologically relevant CDN. They found that CdnE produces the molecule 3′,3′ c-di-GMP (also known just as c-di-GMP) in vitro. This discovery was surprising because 3′,3′ c-di-GMP was originally identified as a molecule that regulates the synthesis of the polymer cellulose11, and it was subsequently discovered to have other roles, such as regulating the formation of bacterial aggregates called biofilms12. Constant production of 3′,3′ c-di-GMP for such other purposes would be catastrophic for bacterial growth if 3′,3′ c-di-GMP can also activate the CBASS system to cause cell death. The authors analysed the genomes of bacteria containing cGAS–STING pathways, and found that bacterial STING occurs almost exclusively in bacteria lacking other signalling pathways that also involve 3′,3′ c-di-GMP, thereby avoiding this potential conflict.

Human STING defends against viruses by relying on the expression of antiviral genes, such as those encoding interferon proteins, which have been identified only in vertebrates. However, bacterial CBASS systems instead fight viral infection by either arresting bacterial cell growth or inducing cell death to prevent further phage spread10.

Morehouse et al. report that bacterial STING most commonly exists as a STING–TIR fusion protein that has a STING domain connected to a TIR domain, which is involved in plant and animal defence responses. The TIR domain is best known for its role in protein–protein interactions in mammalian defence pathways that are part of the innate immune response, which provides a broad defence against pathogens. Some TIR domains in plants and animals also have enzymatic activity13,14 that degrades the molecule NAD+, which is essential for cellular metabolism. 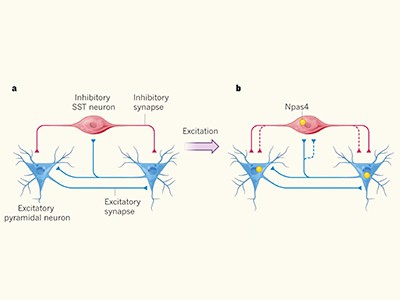 The authors showed that the presence of 3′,3′ c-di-GMP was sufficient to cause a bacterial STING–TIR fusion protein to assemble into long filaments that rapidly degraded NAD+. This NAD+ destruction halted cell growth in the bacterium Escherichia coli. Mutation in the CDN binding site blocked the toxicity of the system in E. coli, suggesting that 3′,3′ c-di-GMP controls filament formation and NAD+ destruction mediated by the TIR domain.

STING–TIR fusion proteins are not limited to bacteria. Using a bioinformatics approach, Morehouse et al. identified such proteins in some invertebrates, including the Pacific oyster (Crassostrea gigas). Structural analysis of a STING–TIR fusion protein from C. gigas revealed that it binds tightly to 2′,3′-cGAMP, which is the CDN that most potently binds to and activates mammalian STING. Notably, in 2′,3′-cGAMP, the phosphodiester bonds between the nucleotides guanosine monophosphate (GMP) and adenosine monophosphate (AMP) have an asymmetric pattern of linkages (a 2′–5′ linkage between the 2′-OH group of GMP and the 5′-phosphate group of AMP, and a 3′–5′ linkage between the 3′-OH of AMP and 5′-phosphate of GMP). This arrangement is found in many multicellular animals, but not in bacteria, and suggests that the dominant ligand for STING changed after it was acquired by our animal ancestors. The reason for this change is unclear.

One unresolved question is how the bacterial cGAS–STING pathway is activated by phage infection. Morehouse et al. showed that, like many bacterial cGAS-like proteins5,15, purified CdnE protein is constitutively active in vitro. Therefore, it is possible that the active protein is normally inhibited and is released from inhibition only on phage infection. An example of this type of system is the cGAS-like enzyme DncV in the bacterium Vibrio cholerae, which is inhibited by metabolites (folate-like molecules) that are presumably depleted during phage infection16. More research will be needed to determine whether this is how CdnE and other cGAS-like proteins are regulated, or if other regulatory mechanisms exist.

As we learn more about the diverse and complex defence systems in bacteria, it might be tempting to consider these immune systems as mirroring those of vertebrates. For example, the CRISPR–Cas system used by organisms such as bacteria can form what is akin to an immunological memory to fight specific phage reinfection. This shows echoes of our own adaptive immune systems, which can remember and respond to specific pathogens. Likewise, the bacterial CBASS systems, including the cGAS–STING pathway, provide broad protection against phage invasion, much as our own innate immune systems do. Interestingly, whereas the CRISPR–Cas system is absent in humans, and specialized immune cells called T and B cells instead do the job, the cGAS–STING pathway and its antiviral defence function are preserved from bacteria to humans.