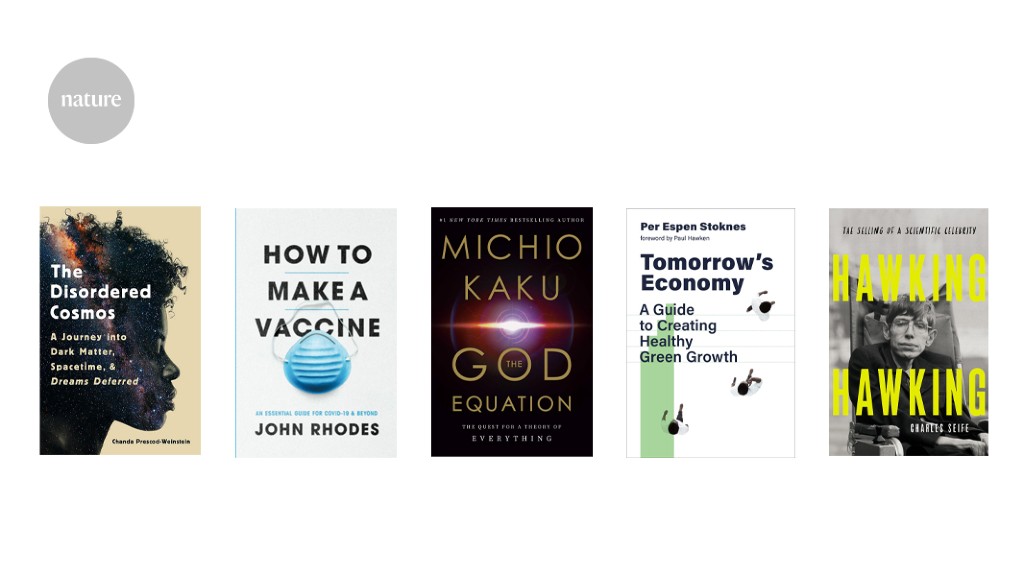 Aged ten, writes theoretical physicist Chanda Prescod-Weinstein, “I thought that I could keep my curiosity about the mathematics of the universe and the existence and function of racism separate.” In fact, she became a leading Black activist in US academia, co-organizing last year’s Strike for Black Lives. Speaking out against “those who are good at physics, but who are not good to people”, she makes a courageous call for action that mingles cosmology, politics and memoir to share a fresh vision of dark matter and the stars.

Not many green activists are employed by a business school; few economists have been successful therapists. Per Espen Stoknes — psychologist, economist, climate-strategy researcher and green‑tech entrepreneur — is thus unusually well informed, balanced and rewarding as he grapples with future economic expansion. What, he asks, will lure minds towards green growth? He is optimistic. Healthy growth provably benefits the “four main factors for modern corporate valuation”: brand, performance, risk and talent.

Stephen Hawking was born precisely 300 years after the death of Galileo Galilei, and died on Albert Einstein’s birthday — facts “that he would have found hilarious”, suggests science writer Charles Seife in his penetrating dissection of the physicist’s celebrity. He is probably correct: Hawking insisted he was not comparable with these giants, while hawking such comparisons when proffered by the press. In his posthumously published 2018 book Brief Answers to the Big Questions, he analyses Einstein’s “genius”, but gives no hint he saw himself as one.

How to Make a Vaccine

When immunologist John Rhodes started his PhD decades ago, he caught a heart-threatening disease from lab guinea pigs. Recovery brought “an enduring zest for life” and “a lifelong interest in zoonotic viruses”. His keen guide to viral disease and vaccination, inevitably focused on COVID-19, mixes science and scientists, for example the fact that June Almeida, one of the originators of the term coronavirus (in Nature in 1968), was the daughter of a Glasgow bus driver. Skilfully pitched at non-specialists, it regrettably lacks illustrations.

A ‘theory of everything’ would encompass all physics, from the expanding Universe to dancing subatomic particles. Might it exist? “This is not just an academic question,” writes physicist Michio Kaku. If found, it should lead to astonishing technologies, as did the theories of gravitation, electromagnetism, relativity and quanta. Kaku describes the history of these ideas, and the untestable string theory — his pursuit since 1968. Authoritative and accessible, the book oddly omits pioneer Thomas Young when discussing interference of light.