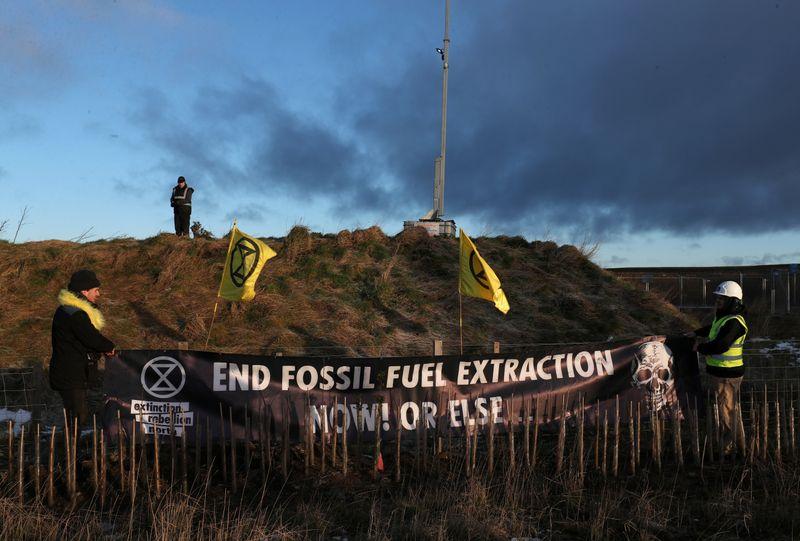 Demonstrators from Extinction Rebellion display a banner as a site security member looks on during a protest at Banks Group’s open-cast coal mine in Bradley, County Durham, Britain February 26, 2020. REUTERS/Scott Heppell

LONDON (Reuters) – Members of climate change activist group Extinction Rebellion dressed as canaries in cages outside a coal mine in the north of England, during a three-day campaign against the site’s expansion that its owner called ill-conceived.

The mine in Bradley, Durham, is owned by Banks Group and is open-cast, meaning its coal is extracted near the surface. Around 500,000 tonnes of coal are due to be mined there before the project’s completion in 2021.

Taken into underground coal mines in cages during the early industrial era, canaries were used as a warning system for dangerous gases, dying before their concentrations became fatal for humans.

Mark Dowdall, environment and community director at Banks Group, said Extinction Rebellion’s demands to halt the expansion at Bradley were “ill-conceived” and would exacerbate the problem the group was looking to solve.

“Until viable alternatives are in place, 5 to 6 million tonnes of coal will still be needed each year in the UK as a raw material for our steel and cement industries, so that we can build much-needed infrastructure including new wind and solar farms,” he said in a statement.

Banks had invested hundreds of millions of pounds in developing onshore wind farms and continued to invest in new renewable technologies, he added.

The Extinction Rebellion protest is scheduled to run until Friday.