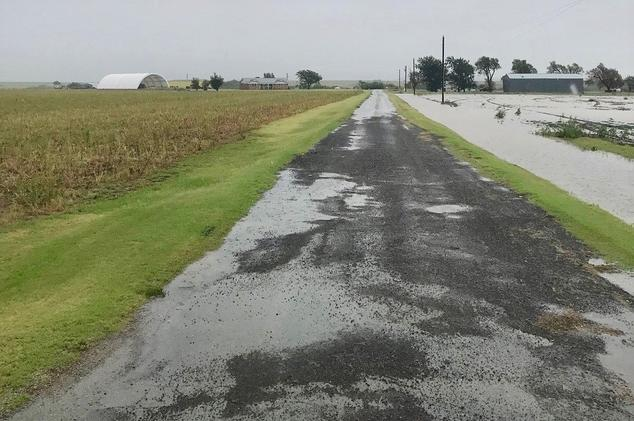 When we talk about infrastructure, we usually mean big, heavy stuff: roads; bridges; seawalls and the like. But as Democrats turn their attention to infrastructure measures potentially costing trillions of dollars, that focus needs broadening. Often the most cost-effective infrastructure is not made of concrete or steel, but soil.

To see what I mean, check out the featured photo taken by Russ Jackson, a farmer in Mountain View, Oklahoma.

You’re looking at the aftermath of 2019 floods that left millions of acres of U.S. farmland underwater. For several years, Jackson farmed the field on the left using cover crops and no-till practices. His neighbor used conventional tillage on the submerged land to the right. Pretty impressive, right? That’s why advocates for regenerative ag talk about soil as infrastructure. If farmers deploy the right practices, soil can limit the huge cost of floods and safeguard food supply.

At the heart of the issue is the quality of farmland soils. In conventional farming, the use of monocultures and chemical fertilizers degrades fertility and can bake soil into clumps of pale sandy matter. These look lifeless in comparison to the fluffy, dark-colored dirt that’s characteristic of healthy soil, which contains high levels of organic matter. If cover crops are not used, the fragile surfaces of conventionally farmed fields are also exposed to erosion by water and wind. Together, this leads to a cascade of negative impacts.

One problem is that the soil simply washes away. According to the Intergovernmental Panel on Climate Change, soil is lost from conventionally tilled fields hundreds of times faster than it is replenished. “If soil continues to erode at current rates, U.S. farmers could lose a half-inch of topsoil by 2035 — more than eight times the amount of topsoil lost during the Dust Bowl,” concluded a recent study by the Union of Concerned Scientists.

As Jackson’s photo demonstrates, the soil that remains does a poor job of absorbing water. A good rule of thumb is that a 1 percent increase in organic matter leads to an acre of soil storing an additional 20,000 gallons of water.

We need that storage because climate change is expected to make extreme rainfall events more frequent in the Midwest. Without it, water from those events can wash off fields, raising the risk of downstream floods. Or the precipitation can sit atop the soil, preventing farmers from planting. When researchers looked at satellite imagery in the aftermath of the 2019 floods, for example, they found that farmers who previously had used regenerative practices were more likely to be able to successfully plant in the spring.

Preventing these problems costs money: The World Resources Institute (WRI) cites a median figure of $500 per acre for anti-erosion measures. But that investment produces real returns. Just this week, researchers at Yale University showed that a 1 percent increase in soil organic matter reduces crop insurance liabilities by 35 percent. As with other infrastructure projects, it will be costlier to wait to repair future damages: The WRI notes that the cost of rehabilitating damaged land can reach $15,000 per acre.

All of this amounts to a strong argument for including “green infrastructure” in the spending measures to be debated in coming months. If that doesn’t happen, there are other avenues for government support, notably the tens of billions of dollars that ag secretary Tom Vilsack has at his disposal.