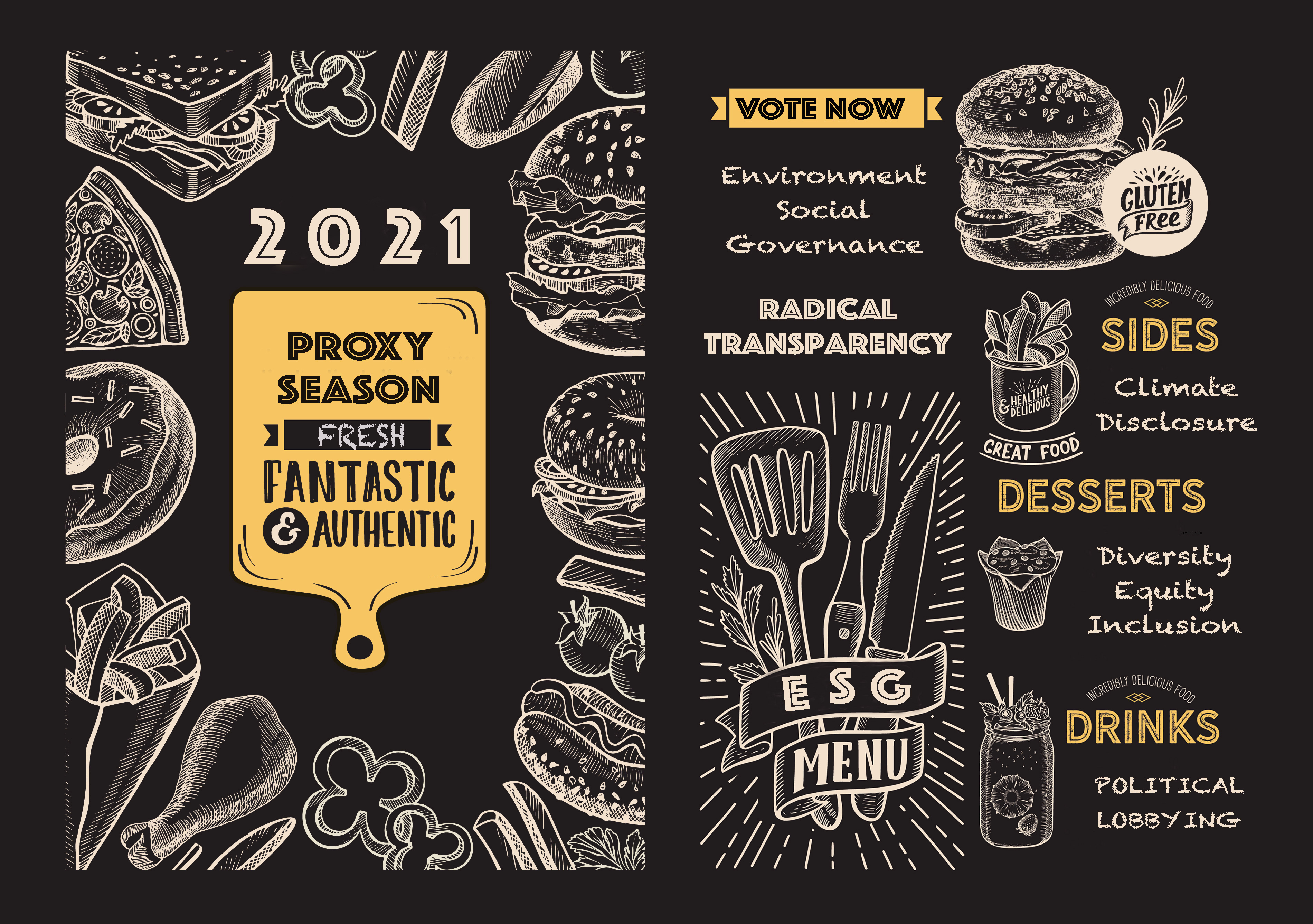 The 2021 proxy season is officially here — much awaited after the tumultuous events of 2020. From how businesses chose to respond to the COVID-19 pandemic to the escalating outcry over racial justice to the increasing urgency around climate change, there is much for companies to answer for this year.

The annual proxy season is also an important harbinger of change in how companies are evolving their governance models and approach to environmental and social issues.

So, what are some ESG issues rising to the top for investors this year? And what could that mean for a corresponding evolution in how companies manage, measure and disclose their ESG risks and efforts?

Here’s what I found:

Demand for climate disclosure is up — and up

In one of the most high-profile examples, investment manager Neuberger Berman voted against the Berkshire Hathaway management last week in response to calls for analysis that shows how the conglomerate manages climate risks as well as diversity and inclusion. Global investment firm Federated Hermes also issued an open letter in the week leading up to Berkshire Hathaway’s proxy meeting, urging the company to disclose how it manages physical and transitional climate-related risks and opportunities, including climate-related financial reporting as well as the feasibility of the parent company and its subsidiaries in establishing science-based greenhouse gas emissions reduction targets.

ESG teams and committees will be wise to counsel their C-suite on this rising tide with expanded disclosure on their approach to climate change — and corresponding targets.

With the European Union increasingly mandating disclosure on climate action, this is a tactic that increasingly will come handy for investors looking to standardize disclosure on this issue. Despite a dramatic uptick in ESG disclosure, there remains no preferred standard for companies to follow. And while stock market darling Warren Buffett might be able to successfully avert this vote for now, mandatory disclosure is likely coming soon, thanks to the Securities and Exchange Commission’s escalated scrutiny of ESG performance and disclosure with its new ESG Taskforce.

Regardless, Neuberger is stepping up the pressure on multiple fronts, according to a report by Barron’s, by pre-announcing votes on shareholder proposals for more than 60 companies this proxy season. That’s almost double compared to 2020. Other companies facing similar pressure this season include General Motors, facing a shareholder proposal to align its performance on GHG reductions with its executive compensation, as well as ExxonMobil for deeper transparency on its climate change financial risks.

ESG teams and committees will be wise to counsel their C-suite on this rising tide with expanded disclosure on their approach to climate change — and corresponding targets.

Diversity and inclusion: From commitments to accountability

The second area seeing a rush of proposals is diversity and inclusion, specifically asking companies to demonstrate how they are making progress on an issue most have publicly committed to improve in. According to Just Capital, 38 percent of S&P 500 companies had announced some sort of action plan on D&I by September. While some of these proposals are certainly inspired by the pandemic and the protests following George Floyd’s death, others are being driven by continued pressure from organizations such as CalPERS and the activist nonprofit As You Sow, which also publishes a Racial Justice Scorecard.

[This article was reprinted from GreenFin Weekly, a free weekly newsletter. Subscribe here.]

Recent examples of such reports include Google, Bristol Myers Squibb and Dell Technologies. While there is no framework guiding these self-disclosures, companies are reporting their workforce’s gender, ethnicity and generational makeup at the very least, although data on more tenuous issues such as racial equity, turnover, pay equity and diversity hiring practices remains scarce and disparate.

One emerging ask: Third-party audits of how companies are working to improve their work on promoting racial equity in the workplace, initiated by CtW Investment earlier this year. While Citi and Goldman Sachs both rejected the proposal, Bloomberg reported from Citi’s annual meeting last month that “the support was high enough that companies are likely to face increased pressure to agree to future reviews.”

A smattering of smoldering issues

Proposals asking for issues across the ESG spectrum continue to evolve and persist, ensuring they remain firmly in focus for companies year after year. So far, examples include demanding new or expanded disclosure on:

Finally, in a bold signal to the industry, Walmart recommended its shareholders to vote against a proposal to withdraw its CEO and chairman’s endorsement of the Business Roundtable’s 2020 Statement on the Purpose of a Corporation in its 2021 Proxy Statement.

It noted: “At Walmart, we think we maximize long-term value for our shareholders by serving our stakeholders. We call this shared value, and it includes delivering value to our customers, creating economic opportunity for associates and suppliers, strengthening local communities and enhancing the environmental and social sustainability of our business and product supply chains.”

Stand by for more.