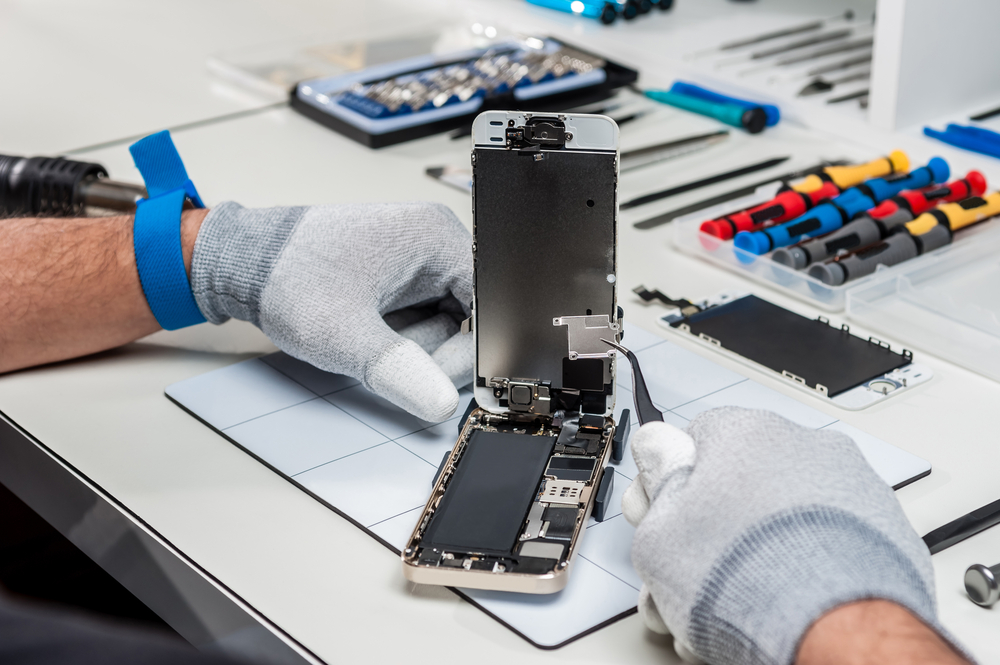 In the waning months of 2020, the European Union took ambitious steps to address the more than 12 million tons of electronic waste the bloc produces annually. Acknowledging that “Europe is living well beyond planetary boundaries,” a European Parliamen vote called for mandatory repairability scores for consumer electronics, amongst a host of other initiatives intended to extend products’ life spans.

While some feel these efforts don’t go far enough, they’re all seen as a huge win for the right to repair movement — an activist-led fight to give consumers (or third-party repair shops of their choosing) the legally protected freedom to fix and modify the products they own.

What’s in a movement

From tractors to TVs, when everyday products break they are difficult, if not impossible, to fix. Replacement parts and repair manuals are hard to come by; complex designs make disassembly unmanageable; and legal hurdles have been erected in the name of IP and consumer data protection, amongst other arguments. In many cases, it is easier to replace than it is to repair, and the activists behind the right to repair movement want this to change.

Beyond enshrining consumer rights, the right to repair could combat planned obsolescence and a throwaway culture that has turned e-waste into the fastest growing waste stream around the globe.

All things considered, their arguments are pretty compelling. Beyond enshrining consumer rights, the right to repair could combat planned obsolescence and a throwaway culture that has turned e-waste into the fastest growing waste stream around the globe — weighing in at more than 50 million metric tons annually.

With all that embedded value and emissions, it makes good sense to keep products in use as long as possible. Extending the lifespan of American cell phones by just one year would be the carbon-reducing equivalent to taking 636,000 cars off the road.

Additionally, repair could collectively save American households $40 billion annually, and fixing easily repairable electronics could create 345,000 stable, local jobs. Most important — and perhaps most top of mind — repair can save lives. When the pandemic struck and the need for ventilators skyrocketed, financial, legal and training limitations set forth by manufacturers were restricting the repair of these devices, thus delaying life-saving treatment.

Perhaps we can thank COVID-19 for shining a light on the lifesaving magic of the right to repair — according to recent coverage, the movement is “poised to explode.” While this momentum is evident in recent European legislation, across the pond the U.S. is experiencing traction of its own.

In August, the Critical Medical Infrastructure Right-to-Repair Act of 2020 marked the first time in U.S. history that a right to repair bill was proposed on the national level. Another notable moment was the inclusion of the right to repair agriculture equipment in the Democratic Party platform.

Since then, more than half the states in the union have introduced right to repair bills that call for equal access to things such as replacement parts, training manuals and tools. While these bills are often limited to a specific industry — targeting electronics, appliances, automobiles, farming or medical equipment — the passage of just one could have ripple effects across the nation.

In November, Massachusetts passed a resolution to bolster its 2012 automotive right to repair law — the first and only right to repair law on the books in the U.S. The resolution expands the data and diagnostic information automakers are required to provide, thus enabling third-party repairs. Despite its limited scope, the 2012 law led to a national standard for automakers and the recent resolution is expected to have similar effects.

“I feel excited about the level of momentum that is growing for right to repair,” Gay Gordon-Byrne, executive director of the Repair Association, recently shared with me. “It’s hard to predict which of the many bills that are being considered will clear all the hurdles — but with more bills the odds are better than ever.” Kyle Wiens, CEO of iFixit and another vocal repair proponent, also shared feeling hopeful: “The growing number [of bills] shows an increasing groundswell. People want this to happen.”

So, what’s the holdup?

According to Gordon-Byrne and Wiens, the biggest barrier to sweeping right to repair legislation is clear: manufacturer opposition.

With arguments ranging from consumer protection to safety concerns to quality control and beyond, manufacturers from diverse industries have fought right to repair bills, in some cases aggressively. “In New York state, there is $2.5 trillion in market cap registered to lobby against the right to repair bill,” Wiens noted. According to Gordon-Byrne, their motivations are somewhat singular: “Manufacturers are enjoying the benefits of monopolized repair.”

There’s a huge opportunity to build a thriving ecosystem around your products, and monetize them over the long run.

“There’s a huge opportunity to build a thriving ecosystem around your products, and monetize them over the long run. Build a model making money selling parts, or licensing models for 3D printed parts,” Wiens suggested. “Manufacturer service networks can be hugely lucrative, as we see in the medical device arena.”

A call to action

From where I’m sitting, the value (and need) to scale repair is evident. So I’ll leave you readers with a few requests.

For manufacturers: Reap the financial, reputational and environmental benefits of repair by researching and investing in repairability programs. Not sure where to start? Fret not, GreenBiz has a framework for you.

For employees: “Work inside your companies to get them to take a public stance on this issue … [If policy teams within the most vocal opponents] drop their opposition, then these bills would pass quickly,” prompted Wiens.

For the rest of us: Visit the Repair Association’s Stand Up page to contact your legislator and voice your support. As Gordon-Byrne’s noted, “[It’s] free, super easy and — believe me — powerful. Every individual can make a difference.”