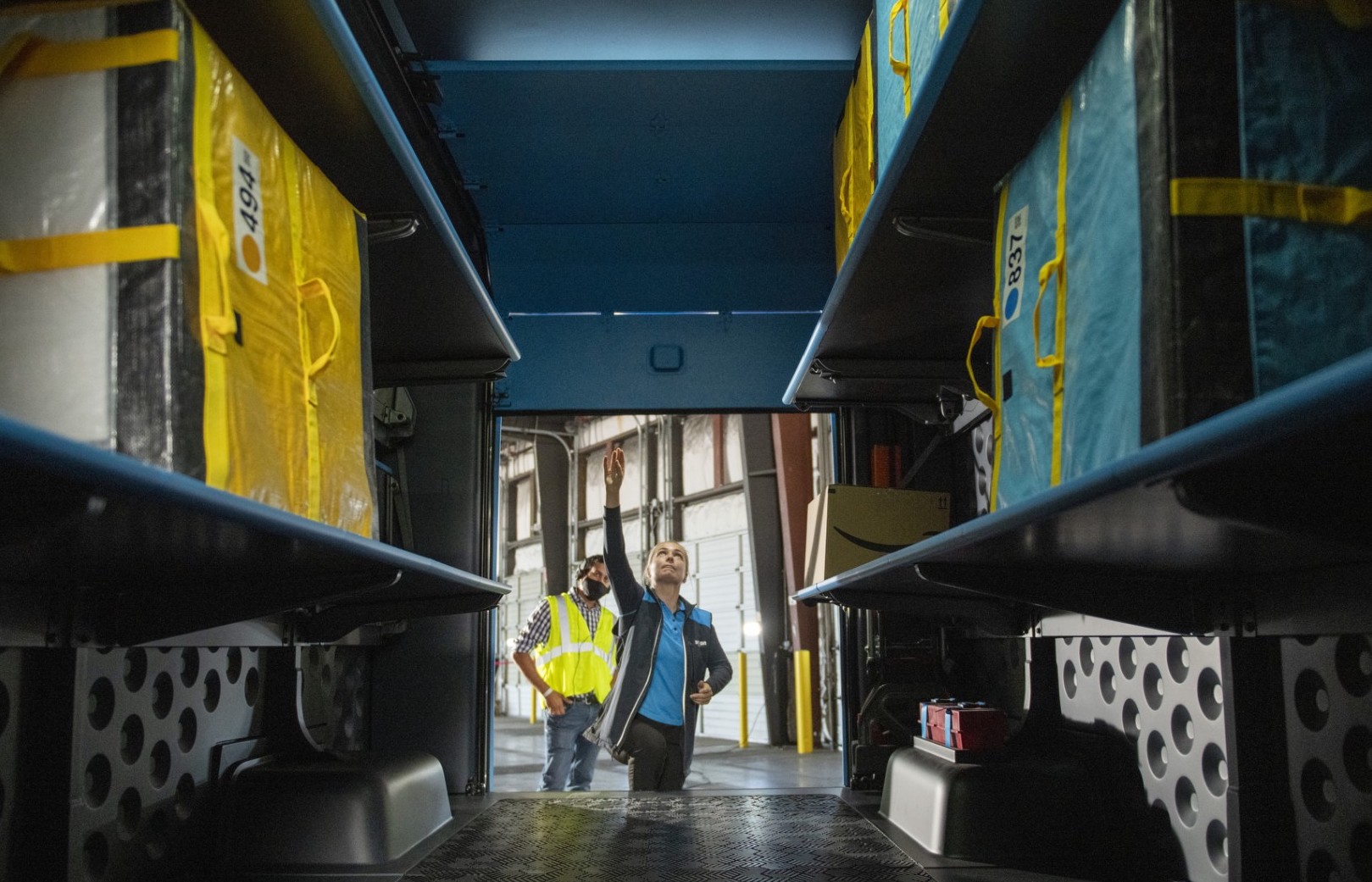 When Ross Rachey set out to electrify Amazon’s fleet of last-mile delivery vehicles a few years ago, he thought it would be a matter of matching the company’s needs to the right vehicle on the market.

It was not that simple.

“We were a little underwhelmed at the vehicles that were available to us when we looked across the industry. It’s not for lack of trying, lots of really smart companies working hard, but we couldn’t find a vehicle that suited our need,” said Rachey, director of global fleet and product logistics for Amazon.

The existing models didn’t live up to Amazon’s range and payload demands. And if the company’s fleet team did find something they liked, they couldn’t purchase it in the quantities they needed.

“We realized we needed to take an active role in accelerating the products and the technology,” Rachey said.

The reality is that charging infrastructure, electricity and utility connections — it’s the longest lead, probably the most challenging part of this equation.

So Amazon finds itself, through a partnership with Rivian, designing its own delivery vehicles and playing a large role in scaling up the electric vehicle market.

Amazon’s Rachey spoke this week with GreenBiz Senior Writer Katie Fehrenbacher during a session VERGE 20. Here are a few takeaways on what we need to rapidly scale EVs.

We need big players to take the lead

There aren’t many motivators as large as a 100,000-unit order for electric vehicles. But that’s the challenge facing Amazon’s partner Rivian right now, and it’s pushing the industry to think a lot bigger.

For scale, Amazon’s order is 100 times larger than similar orders from FedEx or UPS. And Rachey said more large-scale moves such as that could ignite this nascent industry.

“We as corporations and fleet purchasers and auto manufacturers — we have the ability to make it easier for consumers to adopt electric vehicles. We do that by advancing the technology on more aggressive timelines. We do that by building great products so that people can purchase more products,” Rachey said.

More fleet operators are likely to start moving in the same direction, but Rachey says the private sector should pick up the pace before government mandates make it non-negotiable.

“I’m in favor of any policy that makes consumer adoption easier, but we can’t sit around and wait for that. We as the corporate customers, manufacturers, battery suppliers, we need to move this curve faster,” Rachey said.

We need to design (and retrofit) infrastructure with EVs in mind

Rachey’s goal is to make Amazon’s electric fleet as easy to drive and fuel as the gas fleet. That means building out a robust charging infrastructure at Amazon facilities long before it will be needed.

“The reality is that charging infrastructure, electricity and utility connections — it’s the longest lead, probably the most challenging part of this equation,” Rachey said.

The first thing Amazon has done is design all new buildings with the ability to handle multiple types of fueling, with stronger energy connections to the grid and space onsite for eventual energy storage needs.

“Make sure that when you build a site, you haven’t created a one-way door that is going to be painful later to electrify,” he said.

For existing sites, Amazon is figuring out how to retrofit and already has started the work at thousands of locations across Europe and North America.

We need to develop strong relationships with utilities

Rachey says Amazon — and all early movers in this space — have an obligation to be good partners to regional utility companies. The earlier these private companies communicate their infrastructure needs, the sooner utilities can try to meet them.

“We are both an exciting customer, because we’re going to have very large energy demands, but it’s not lost on us that we’re a challenging customer, given the scale and the timelines,” Rachey said.

It’s likely that Amazon’s demands will outpace the utilities — Rivian is aiming to put the new delivery EVs on the road by the end of 2021 — but Rachey says the company is being as transparent as possible with its plans. He’s encouraged by the fact that everyone at the table, including policymakers, utilities, corporations and auto manufacturers, has the same goal: decarbonization.

“Our goals are all aligned, and that’s a really powerful jumping-off point,” Rachey said.

LinkedOut
Gas prices are at a seven-year high and expected to keep rising. How to save at the pump
What if an Asteroid Were Going to Hit Earth? NASA Expert Answers
Shenzhou-13 heads for space station after reaching orbit
Reddit channel posts stories of anti-vaxxers dying of Covid, scaring fence-sitters into getting the shot