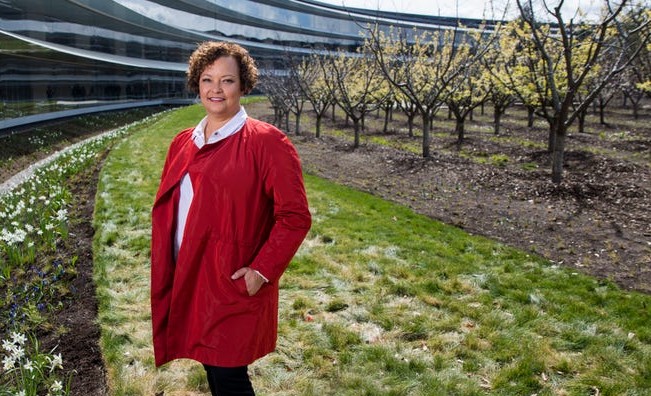 Apple’s Lisa Jackson is moving social justice to the top of the list for protecting the environment. Coming from one of Fortune’s “most powerful women in business” at one of the world’s largest companies, she has views that could have a long-term global impact.

Apple’s big-ticket sustainability goals released this year for 2030 include becoming carbon-neutral and achieving a net-zero impact in all operations. The company also recently embraced an outward-facing leadership role on its social impacts, with a $100 million investment to create a Racial and Equity Justice Initiative (REJI), which CEO Tim Cook asked Jackson to lead in June.

How can we grow some Black and brown-owned businesses that are working on the issue of climate change?

It’s not new for Apple’s vice president of environment, policy and social initiatives to see racism and climate change as intertwined. She capped off her two-decade career with the U.S. Environmental Protection Agency as its chief under President Barack Obama. Jackson recalled a key lesson from her New Orleans childhood to GreenBiz co-founder Joel Makower during a VERGE 20 virtual event Monday.

“I know what it means to be at the receiving end of our industrial society, whether it’s the air quality coming from petrochemical facilities, of wind, or the water quality coming down the Mississippi River, or the Gulf of Mexico’s health — and that ecosystem and diversity, all those issues, conflate to me around the place I call home,” the chemical engineer said.

For example, she has seen the resources of the world flow upward to the people who make inequitable decisions around land use and then profit from them — but not flowing back to the people who become victims of flooding, fires or other consequences of poor planning. “Those are the questions we have to solve if we’re really going to solve the climate crisis,” Jackson said.

Fighting for equality and justice for my community has driven my career as an environmentalist. I’ll continue the work leading Apple’s Racial Equity and Justice Initiative. #BlackLivesMatter https://t.co/JKuaQP3I2r

“It all comes together because we know that the co-pollutants of CO2 from fossil fuel, and from the fossil fuel-burning power sector and transportation sectors, are all part of that justice equation,” she said.

As part of its REJI initiative, which centers around representation, inclusion and accountability, Apple describes using its voice and cash to transform systemic disempowerment into empowerment. One way is to hire more coders of color and to build up wealth in underserved communities by doing more business with suppliers owned by people of color.

“One of the things we did in the economic empowerment space is come up with this idea of an impact accelerator,” she said. “How can we grow some Black and brown-owned businesses that are working on the issue of climate change? Because we’ve always said that climate change is an economic opportunity, how can we make sure that opportunity is spread equally?”

Plus, Apple is also nurturing coding hubs at historically Black colleges and universities.

Apple’s $100 million toward REJI is nine to 10 times the investment committed by Amazon, Google and Facebook each toward racial justice causes.

It’s been two years since Apple planted the seeds to grow a circular economy by committing to make all of its devices from recycled or renewable materials eventually. Jackson described how the iPhone maker quickly found that its “moonshot” of shunning ingredients that need to be mined is not just about closing the loop on material resources, but on human resources as well. The tech giant prioritized eliminating conflict minerals and questionably sourced rare earths early on because of the labor and supply chain difficulties involved.

In this area, Apple so far has created its own recycled aluminum alloy for devices including the Apple Watch, MacBookAir and iPad, and it uses recycled tin in solder in some logic boards. It has developed profiles of 45 materials in terms of their impacts on the environment, society and supply chains, singling out 14 for early action on recycled or renewable sourcing. The haptic engine, which enables a variety of vibrations in iPhone models 11 and up, uses recycled rare earths. The Daisy disassembly robot gained a cousin, Dave, which recovers rare earth elements, steel and tungsten from spent devices and scrap.

Apple is still aiming to make all of its products and packaging from recycled and renewable materials. So far all paper materials are recycled, and plastics have been reduced by 58 percent in four years. The company is more quietly progressing on safer chemistry. Toward its goal of gathering data on all the chemicals that comprise its products, it has information from 900 suppliers on 45,000 parts and materials.

“As much as we want to continue to engage in communities to try to lift up the standards and use our purchasing power to lift up, we also have to be honest with ourselves and say, there’s also a need for us to show an alternative path,” Jackson said.

4. Being first and bigger

Where Apple leads, others in the market listen. For instance, so far it has nudged more than 70 of its suppliers to adopt clean energy, which Apple has fully implemented in its offices, data centers and stores without leaning on offsets. The company’s supply chain partners of all sizes are ripe for doing something differently, Jackson said.

Because we’ve always said that climate change is an economic opportunity, how can we make sure that opportunity is spread equally?

“They’ve seen what COVID can do, or a crisis can do, to a business that hasn’t thought about resilience and sustainability,” Jackson said. “Apple can help by modeling and also taking a risk on technologies and ways of doing business, and quickly scaling them.”

For example, Apple was able in a single year to embed 100-recycled rare earth elements in the magnets of its iPhone 12 series.

“If we can come up with a cleaner alternative, then our belief is that these other places will have no alternative but to clean up as well so that they can be competitive not just on an economic level, but on a social and environmental level as well,” she said. “That’s going to be the exciting work for Apple … in the next few years is to not only do it first but to do it bigger, and to hopefully leave behind a supply chain that’s now economical and accessible for other people. Because those industries, those enterprises will say, ‘OK, there are probably more people who want to buy recycled material as well’ — and that’s the circular economy.”