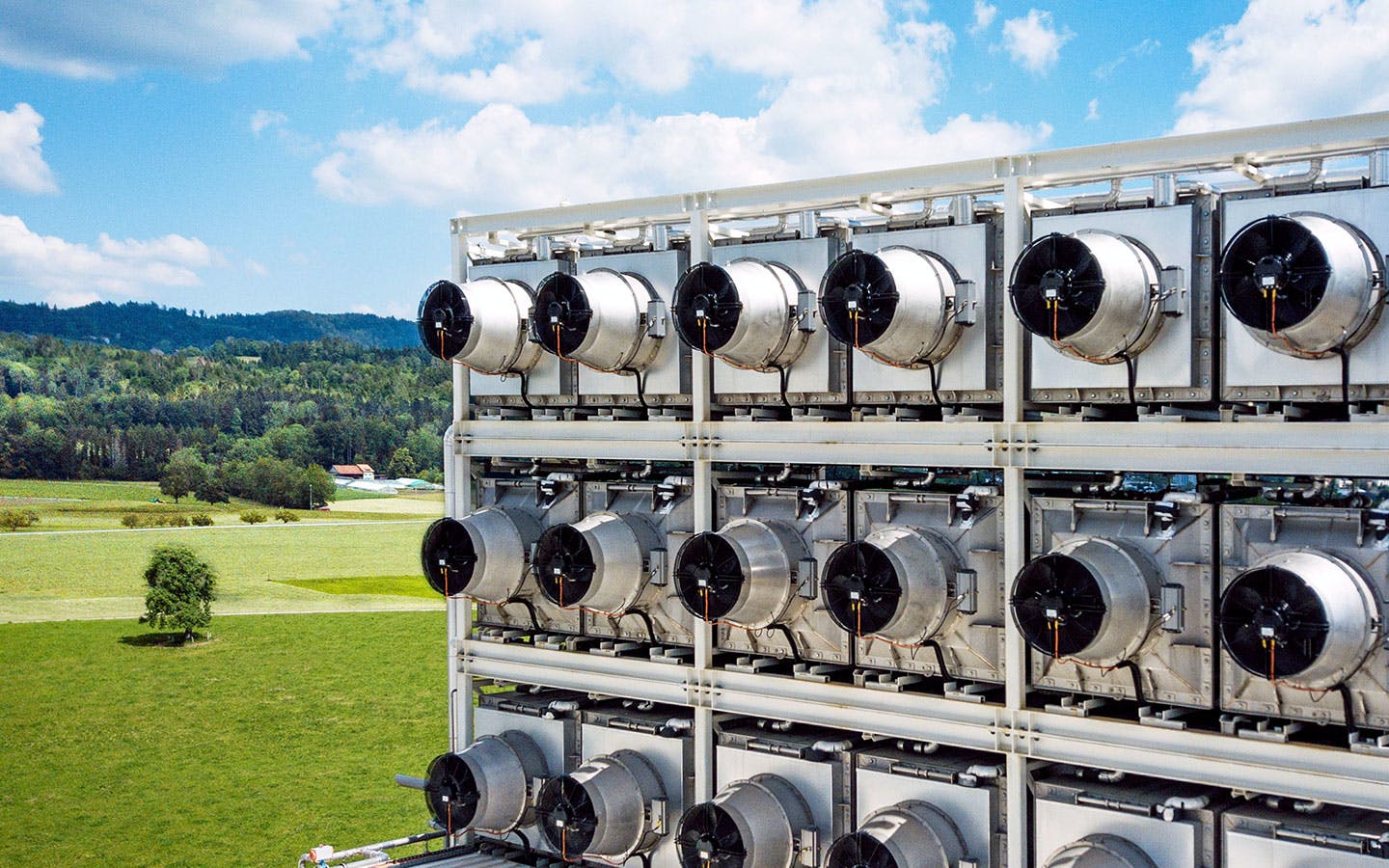 It may be a little early to start writing about trends for 2021, but I’m going to do it anyway. What’s on my mind? Carbontech, a category of climate tech I’d love to see break through next year. It’s the exciting idea that we can take something that could be considered waste, draw it out of the atmosphere and turn it into a source of revenue or economic growth.

There are signs that give me optimism. This morning, digital payments company Stripe announced a plan to let its merchant customers divert a portion of their revenue to carbon removal projects. The move follows Stripe’s own pledge to put $1 million into four “high potential” projects earlier this year, and the two initiatives are related. The specific technologies that Stripe is funding are carbon-sequestering cement (CarbonCure), geologic storage (Charm Industrial), direct air capture (Climeworks) and ocean mineralization (Project Vesta).

“Stripe’s climate initiative is a gift because it removes all barriers to positive action,” wrote Substack CEO Chris Best, a beta tester, in a statement. “This program makes it easy, and valuable, to do the right thing. We’re proud to be part of it.” All of the popular newsletter platform’s writers have the opportunity to participate. Makes me want to host my own personal blog there.

Lest I forget, another well-known commerce player, Shopify, last month picked carbon removal and carbontech as a focus for its Sustainability Fund, which commits $5 million annually to climate-tech solutions. Some companies it is supporting are the same as Stripe (CarbonCure, Charm Industrial and Climeworks). It is also including ocean sequestration in the mix through its support of Planetary Hydrogen. And it is also letting merchants add options for offsetting that buyers can select during transactions.

Startups in this particular corner of the climate solutions area have not actually been supported in a commercial way.

Rising corporate support of carbontech and carbon removal technologies writ large is one of the biggest reasons driving my optimism that the market is about to take a turn.

Last week, for example, Microsoft announced one of its most unusual investments yet, as it seeks to deliver on its pledge to become a “carbon negative” company. It plans to supply Alaska Airlines with sustainable aviation fuel for the three most popular routes flown by its employees between Seattle and Silicon Valley, via a partnership with SkyNRG, which produces it from waste oil and agricultural residue. That’s right: Microsoft is buying jet fuel.

MInd you, those jets will still need to use regular fuel in combo with the sustainable stuff, but the strategy will help Microsoft reduce emissions from those flights (it’s also working on an accounting standard for helping do this), and we all know the aviation sector will be really tough to decarbonize. This is a much needed commercial boost, optically speaking.

A couple of weeks ago, Microsoft also joined the Northern Lights project in Norway, which is seeking to standardize methods for capturing carbon emissions at industrial facilities in Europe, turning them into a liquid and transporting it to a place where it’s pumped and stored under the ocean floor. The initiative — a collaboration of Norway’s government along with oil giants Equinor, Shell and Total — is moving into a commercial phase.

The nature of Microsoft’s involvement isn’t entirely clear, but one thing being explored is how the software company’s analytics technology can help create blueprints for the techniques being used to capture CO2 (so they can be replicated elsewhere) and for creating new value chains for transporting and managing it.

Corporate interest is on the rise

Carbontech is very much in the spotlight at this week’s VERGE 20 virtual event, in sessions dedicated to moonshots and emerging technologies. According to a comprehensive market report published this week by the Circular Carbon Network (CCN) and discussed during the conference, the pace of activity picked up dramatically in the past decade — of the roughly 330 innovators working on carbon removal or turning carbon into value, more than 65 percent of them were started after 2010. About 50 percent of the 107 companies that CCN tracks closely are already generating revenue. I’ll bet that’s more than you thought.

The investment dynamics are intriguing: CCN’s research uncovered 135 companies in this space that have raised $2.2 billion; its own Deal Hub tracker recovered deals worth $714 million in the past year, a significant pick up of activity, according to the organization’s report.

“What you are seeing is an accelerating pace of interest and activity,” said Nicholas Eisenberger, managing director at Pure Energy partners and co-founder of CCN, who spoke about this topic during a carbontech market update at VERGE 20. “This market is going to either be very large or ginormous.”

Here’s another big takeaway from my conversation last week with Eisenberger and his colleague Marcius Extavour, executive director of the NRG Cosia Carbon XPrize, one of the managing organizations for the CCN: Deals with corporate investors are increasingly attractive to carbontech entrepreneurs. And vice versa.

CCN is tracking 61 multinational companies (as of this writing) involved in everything from research and development (the most common intersection) to buying and selling CO2 derivatives (buying it for food and beverages or selling carbon credits). Aside from Microsoft and the to-be-expected oil companies, others on the list include Amazon, Delta Air Lines, Interface, Lafarge, Nike and Starbucks.

The extent to which COVID-19 infrastructure investments and economic recovery plans are linked with climate action is also likely to increase corporate involvement, especially outside the U.S., where some investments already have been linked to these metrics, such as the bailout of Air France, Extavour added.

How ginormous could the carbontech market get? According to nonprofit Carbon180, the total addressable market for products that could be affected is $6 trillion — with the biggest opportunities for using “waste CO2” found in transportation fuels and building materials. Captured carbon also could be a resource for food, fertilizers, polymers and chemicals. (Before you ask, very few innovators that CCN is tracking are focused on enhanced oil recovery applications.)

Helping entrepreneurs commercialize carbontech more quickly is the mission of the new three-year Carbon to Value Initiative created this summer by the Urban Future Lab at New York University-Tandon, Greentown Labs and the Fraunhofer USA Technbridge (with support from the New York State Energy Research and Development Authority and the Consulate General of Canada in New York). Whew.

Lo and behold, C2V last week added the first corporate members to its leadership council with representatives from Johnson Matthey, W.L. Gore and Associates, Mitsubishi Chemical Holdings, NRG and Suez. (Extavour and Eisenberger are also on the council, as is Noah Deich, executive director of Carbon180.)

Pat Sapinsley, managing director of cleantech initiatives at NYU Tandon, said carbontech entrepreneurs haven’t benefited broadly from attention by the investment or mentorship communities that have shown up to support other climate-tech sectors such as energy or transportation. “Startups in this particular corner of the climate solutions area have not actually been supported in a commercial way,” she said. “They’ve been very well supported recently, by some really excellent NGOs, but we bring commercial chops to the table.”

C2V is accepting applications for its first startup cohort (supported from May to November 2021) through Jan. 27. Emily Reichert, CEO of Greentown Labs, said there are four sorts of solutions types C2V hopes to catalyze: capture mechanisms; transformative process innovations; utilization methods that use CO2 as a feedstock fuels, building materials and so forth, and storage approaches (including those focused on important natural solutions such as sequestration).

By mentoring carbontech entrepreneurs, C2V hopes to send a “market signal” for broader commercial and government support, Reichert said. “This is such a multidimensional problem that we need to tackle it from a multi-industry and multidisciplinary approach,” she said.

By the way, there are still three days left of VERGE 20, with plenty of sessions about carbon solutions, including one of the most popular approaches — tree planting, conservation and cultivation initiatives. If you’re missing out, register here.